AMITY SHLAES, the economic historian who almost single-handedly forced a reappraisal of the 1930s with her best-selling The Forgotten Man, now sets out to do the same for Calvin Coolidge, one of our forgotten presidents—and, where not forgotten, imperfectly remembered or purposely misrepresented.

In Where They Stand, his book on presidential performance, Robert Merry, editor of this magazine, writes of Calvin Coolidge and his low standing among historians:

By the standard of voter assessment, he merits respect for retaining the presidency after his nineteen-month incumbency [after succeeding Warren G. Harding, who died in office] and then retaining it for his party four years later. He presided over peace, prosperity, and domestic tranquility for nearly six years. . . . and Coolidge detractors might inquire whether their ratings stem from the fact that he was among the twentieth century’s most concise exponents of limited government.

Although Coolidge’s economic policies are held by some to have created an unsustainable boom that led to the Great Depression, the argument that Coolidge bears responsibility for that economic calamity is more theoretical than provable. And in fact, the debate about what brought on the Depression remains unresolved, along with arguments about whether the measures taken to combat it worked in significant ways or just exacerbated the problem until it was resolved by World War II.

But what is not theoretical is the prosperity that buoyed our nation during the Coolidge administration, as documented by Shlaes in this impressively researched and engagingly written chronicle of a successful president and his administration. In the process, she brings one of our more admirable presidents back to life, both as a man and as a representative of a fast-fading era.

As an old-school Republican and a Yankee from the days before New England became a quaint theme park for the pretty people, Coolidge believed in economy in all things, including language. And Shlaes wastes no words. Despite the length and heft of her volume, there’s no padding, no political or ideological skywriting, no invented drama. She shows us the man as he seemed—and wanted—to be and allows the life, the words, the actions and policies, the politics and the country itself to carry the story.

“There are plenty of personal events in Coolidge’s life,” writes Shlaes, “many of them sad ones, but he was principally a man of work. Indeed, Coolidge was a rare kind of hero: a minimalist president, an economic general of budgeting and tax cuts. Economic heroism is subtler than other forms of heroism and therefore harder to appreciate.”

In Coolidge’s personal life, writes Shlaes, from boyhood on, he “brought saving to a high art. Coolidge was so parsimonious that he did not buy a house in Massachusetts even after he became governor, so careful that the Coolidges owned no car until after he achieved the presidency, so strict about money that his son John never forgot it.” When the father became president, writes Shlaes, his younger son Calvin Jr. was working in a tobacco field in Hatfield, Massachusetts. Some friends suggested they wouldn’t be working anymore if their fathers were president. The boy replied, “If your father were my father, you would.”

As president, Coolidge applied his commitment to thrift and fiscal responsibility to the federal budget “with a discipline sadly missing in his well-intentioned predecessor, Warren G. Harding.” Under Coolidge, Shlaes points out, the federal debt was reduced: “The top income tax rate came down by half, to 25 percent,” and “the federal budget was always in surplus. Under Coolidge, unemployment was 5 percent or even 3 percent. . . . wages rose and interest rates came down so that the poor might borrow more easily. Under Coolidge, the rich came to pay a greater share of the income tax.”

And think about this: “When in 1929 the thirtieth president climbed onto a train at Union Station to head back home to Massachusetts after his sixty-seven months in office, the federal government was smaller than when he had become president in 1923.”

SHLAES GUIDES us through the early years in some detail, from his birth as John Calvin Coolidge (the John is gradually shed) in 1872 in Plymouth Notch, Vermont, to John and Victoria Coolidge, through his boyhood in Plymouth, helping his storekeeper father and attending public school, then to the Black River Academy in Ludlow, Vermont, from which he graduated. He was admitted to Amherst College in Massachusetts, where after a slow start he hit his stride, graduating with honors in 1895. In his senior year, he entered a national essay contest sponsored by the Sons of the American Revolution and won first prize, a gold medal worth $150.

Upon graduation, he read law in a firm in Northampton, Massachusetts, a town that would become his home. In 1897, he passed the bar, opened a law office and began his involvement in Republican Party politics. He was appointed to the city council in 1900, elected and then reelected city solicitor, and appointed county clerk of courts in 1903.

In 1904, now chairman of the Republican City Committee in Northampton and rising in his profession, he still couldn’t find the wife he wanted. Apparently he didn’t have an easy way with women. “Perhaps the right girl would know to break through herself and get to him, first,” Shlaes writes. “Finally, she did.”

Coolidge was living in a rooming house, with women nearby at Smith College and the Clarke School for the Deaf. One morning, still in his underwear, he planted his hat on his head and began shaving. He was startled by a peal of female laughter coming through his open window. The laugher was Grace Anna Goodhue, a teacher at the Clarke School. She’d seen him shaving in his hat while watering the flowers outside her dormitory. “Soon she sent him a pot of flowers, and he sent her his calling card. Their first date was at a political rally at Northampton City Hall.” And a year later, in 1905, they married.

Of the match, a friend of Coolidge observed: “Miss Goodhue had taught the deaf to hear; now she might be able to teach the mute to speak.”

Shlaes writes, “Six and a half years younger than Calvin, Grace was graceful, like her name. . . . She made friends everywhere.” A Coolidge acquaintance called her “a creature of spirit, fire and dew,” and Shlaes reports that other men “also found Grace stunning, and were stunned to find that she favored the quiet lawyer.”

But favor him she did, and that remained the case throughout their married life, with Grace supplying the brightness, enthusiasm and joy in each day that was perhaps lacking in his. (Alice Roosevelt Longworth would observe that he looked like he was “weaned on a pickle.”) He provided stability, certainty and accomplishment. To be sure, there were tragic interludes, most notably the death of Calvin Jr. from blood poisoning—a death, as Shlaes points out, with parallels to the death of Abraham Lincoln’s son in the White House. But their marriage remained solid.

ONCE MARRIED, Coolidge rose steadily—to the state legislature in 1907, mayor of Northampton in 1910, the Massachusetts state senate in 1912 and senate president in 1914, lieutenant governor in 1916 and governor in 1919. As governor, he won national attention for his stand during the Boston police strike, with his telegram to Samuel Gompers resonating with voters across the country: “There is no right to strike against the public safety by anybody, anywhere, any time.”

At the 1920 Republican convention in Chicago, Coolidge arrived as Massachusetts’s favorite son, but party leaders chose Ohio’s Warren G. Harding as their presidential standard-bearer. After disagreements among leaders and delegates, however, Coolidge emerged as the unanimous vice presidential choice. Once elected, Coolidge kept a low profile and maintained a discreet distance from what would become a scandal-ridden administration. Harding himself was not a venal man, but he surrounded himself with people who were.

In fact, writes Shlaes, he was ultimately the victim of his own congenial temperament. “Harding, winningly rueful as always, even quoted his own father at a press conference to explain his troubles. It was good that Warren had not been a girl, his father had said. He would always be in the family way—because he couldn’t say no.”

On the night of August 2, 1923, while visiting John Coolidge in Plymouth Notch, Calvin and Grace retired early. There was a knock on the door (there was no phone service), his father answered, then woke them with the news: President Harding had died in San Francisco. A special phone line was installed; Coolidge prepared a statement of condolence; he consulted with Secretary of State Charles Evans Hughes. As Shlaes reports, “By kerosene lamplight, before a small group, . . . in a small town far away from even the county seat or the state capital, a new U.S. president was sworn in by his father [a notary public].”

The Coolidges went back to bed, then drove to Rutland in the morning. “At Rutland, a crowd of two thousand waited; the chief superintendent wanted to supply a special train, but the Coolidges preferred to take the 9:35.” As he left Vermont, Coolidge looked ahead with simple confidence. “I believe I can swing it,” he said.

Pullquote: In 1923, when President Harding died, the national debt stood at more than $22 billion. When President Coolidge left office six years later, the debt had been reduced to less than $17 billion.Image: 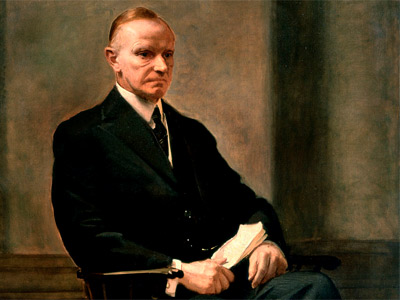