[amazon 019977529X full]THE ROMAN Empire casts a long shadow. It may not have been the largest empire ever to exist, but it was one of the largest, and few if any can match its longevity. The Romans ruled Italy by the end of the fourth century BC, dominated the entire Mediterranean world by the middle of the second century BC and in the years to come ruled from the Atlantic coast in the west to the Euphrates in the east, from what is now Scotland in the north to the Sahara desert in the south. This achievement was all the more remarkable in an age when no person or idea could travel faster than a ship could sail or a horse gallop. The last emperor to rule in the western provinces was deposed in 476. The last to rule from Constantinople—established in the fourth century AD as a new Rome, with its own seven hills and senate—lost his city to the Turks in 1453.

Greg Woolf, a professor at the University of St. Andrews, opens his excellent new book with the statement, “All histories of Rome are histories of empire.” This states a truth that should be obvious, although it is surprisingly often neglected by some scholars working on the period. That is not the case here, and Woolf’s focus “is empire itself,” and within that he explores many of the great questions—how and why the empire was created, how it changed the world, how the empire itself changed and, ultimately, why it failed. This is a vast topic, and any of his chapters could readily be expanded into a book in its own right. His focus is on some fifteen hundred years, from the creation of the republic to the end of the sixth century AD, when the eastern empire made an ultimately unsuccessful bid to regain Italy and some of the western provinces. Moderns usually refer to the eastern emperors as Byzantine, but they saw themselves as Romans. Nevertheless, by this time the eastern empire was sufficiently different to make this a good stopping point. In the eighth century, the Arab conquests would strip the eastern empire of the bulk of its territory, leaving it merely one state among many and no longer by any stretch of the imagination the dominant superpower in the world.

Traces of the western empire survived. For scholars, the orthodox view now stresses these continuities and speaks of the creation of the barbarian kingdoms that replaced them as transforming the ancient into the early medieval world—a label giving a more positive spin to what used to be called the Dark Ages. At times, this is accompanied by a somewhat naive tendency to play down the violence and upheaval of this process. However, even these commentators don’t pretend that change did not occur. An immense and coherent empire was replaced by many smaller kingdoms and states, and the world became less stable, much less literate, technologically less sophisticated and far more local in its focus. The Roman Empire had been powerful and was gone, even if traces remained in law or the structure of a Catholic Church centered on Rome. These remain to this day, without altering the basic fact that the Roman Empire is long gone.

THE SUCCESS of Rome’s empire—the republic was already an imperial power even before the emperors—is obvious from its size and longevity. Its sophistication and apparent modernity impress us, as do its legacies. Christianity began under Rome’s rule, and together with the Greco-Roman culture of that empire, the Judeo-Christian tradition provides the main bedrock of Western culture. Roman monuments still inspire awe, even in their ruined state. Woolf notes that if the Pantheon or the Baths of Caracalla in Rome were still covered in their original marble and decoration, they would rival the Taj Mahal in beauty as well as in sheer grandeur.

The bathhouse was one of the most sophisticated pieces of engineering ever created by the Romans, and it is significant that so much ingenuity was devoted simply to make life more comfortable. A society has to be wealthy to afford such luxury—and even small communities and modest army bases had their public bathhouses, for this was not simply an indulgence for the rich. The vast cost of the grand public entertainments and the amphitheaters and circuses built to stage them is a similar indicator of priorities. The cruelty of gladiators and beast fights shock us as something utterly alien to modern sensibilities, but the simple fact that a society could afford to lavish money on such spectacles is a sign of its wealth. (Gladiators still make good box-office material, and in Hollywood’s Rome, all roads still lead to the arena.) Modern analyses of samples taken from the polar ice caps also appear to bring the Roman world close to our own, for we now know that industrial activity during the first and second centuries AD generated levels of pollution not seen again until the Industrial Revolution.

Rome—successful and sophisticated for a very long time (if also at times appallingly cruel)—offers a dream of power and success. Roman symbols—the eagle, wide and straight roads, columns and triumphal arches, laurel wreaths, the title of caesar or kaiser or tsar, and the fasces that gave their name to Mussolini’s party—have often been invoked by ambitious leaders and states. Eighteenth-century education drew heavily on the classical past, and America’s Founding Fathers looked to Roman models as they sought to craft a better version of Rome’s republic that would not decay into monarchy. For Rome had suffered several serious crises during its long history, and the one that tore its republic apart in political violence and civil war was so grim that by the end many Romans were eager to accept the rule of an emperor instead of elected magistrates as long as it brought peace.

The empire flourished in the first two centuries AD, the period when the vast majority of its great monuments were built. It also survived subsequent crises, but ultimately it still collapsed. The dream of Rome’s success cannot avoid the nightmare of its fall—or almost inevitably its “decline and fall,” for the title of Edward Gibbon’s great work is firmly established in our minds. Whether called the Dark Ages or the early medieval period, the world that followed was a lot less sophisticated. The lesson appears to be that progress is not inevitable and success rarely permanent. Yet that has not stopped successive generations from looking to Rome in the hope of matching its success and avoiding its failure.

Woolf’s book is not about learning lessons for the modern world or comparing our society and states to Rome. Instead, this is history as it should be written and studied—looking at the past on its own terms in an attempt to understand it. This is a worthwhile end in itself, but it is also essential before making any attempt to draw lessons for the modern world. Drawing hasty analogies from the past often reveals no more than the author’s own preoccupations.

For Woolf, there is little point in comparing the Roman experience to that of more recent empires, and parallels are only drawn with other preindustrial empires. The approach is both refreshing and illuminating. Julius Caesar was granted honors very close to divinity during his dictatorship and was formally deified two years after his assassination. His heir—the future emperor Augustus—then became divi filius, the “son of the god.” He was worshipped in his own right in some provinces during his lifetime and deified when he died in AD 14. Only the mad and bad emperors tried to be gods while they were alive, and only such unpopular rulers were not made gods by the Senate after their deaths. The process became so routine that Emperor Vespasian’s final words were a grim joke—“I think I am becoming a god.” By looking at the divine or semidivine rulers of other ancient empires, Woolf shows that this should not surprise us. It would have been odd if the Romans had not thought of their rulers as more than mortal.

It is a considerable challenge to survey such a broad period and extensive topic as Rome and its empire. To do it well requires both a familiarity with the details and a capacity to stand back and ask big questions, as well as the ability to connect the two. Woolf succeeds at both. He mixes discussion of the underlying ecology and geology of what became the Roman world with consideration of telling details. He explains that “there are no chickens in the Iliad, but Socrates’ last words were that he owed a cockerel to the god Asclepius.” Woolf notes that chickens appeared in the Mediterranean world sometime in the middle of the last millennium BC. Quick to breed and relatively easy to maintain, they provided eggs and a source of conveniently small quantities of meat—an important attribute in a world without refrigeration. The same is true in much of Africa today, where you will often see roadside signs advertising “live chickens” for sale. Such small points help build a picture of everyday life. Neither the little details nor the new approaches to understanding the past are allowed to dominate.

Pullquote: Many of Woolf’s questions are very old ones, which does not mean they are easy to answer. No one has yet come up with a satisfactory explanation of why Rome expanded as it did.Image: 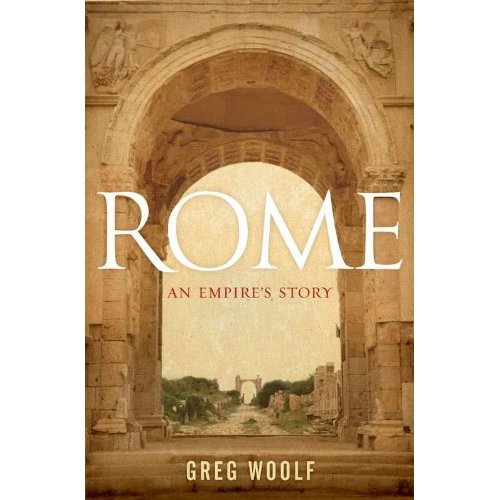