FOR NEARLY two decades, Robert Kagan has opined about U.S. foreign policy. The author of five books and many articles, including a monthly column in the Washington Post, he is a fixture in the foreign-policy establishment with bipartisan influence in Washington. A foreign-policy adviser to Mitt Romney today, as he was to John McCain in 2008, he even has found favor in the Obama administration. He also can boast popular appeal: Of Paradise and Power (2003) spent more than two months on the New York Times best-seller list. Active in small neoconservative organizations, he was one of only two people (the other was his frequent coauthor William Kristol) to have signed all thirteen letters and public statements issued by the Project for a New American Century, and he is on the board of directors of its successor organization, the Foreign Policy Initiative. But he also has managed to thrive within large, established think tanks such as the Carnegie Endowment for International Peace and the Brookings Institution, where he is currently a senior fellow.

Kagan’s latest offering, The World America Made, is a cri de coeur directed at a foreign-policy establishment beset by doubts and a wider public harboring even deeper ones. In both tone and substance, the book is aimed at soothing American anxieties over the nation’s fiscal and geopolitical future. In some respects, his diagnosis is sound—the scope of American decline is often exaggerated and not to be celebrated. But in several critical respects, Kagan’s prescriptions for the present and future of U.S. foreign policy are shortsighted at best, harmful at worst.

The most important of these is his rejection of calls for the United States to reduce military spending, recalibrate its global commitments and restrain its interventionist impulses. Kagan scorns the suggestion that we are entering a post-American world with multiple power centers as opposed to the single U.S. hegemon. On one hand, dismissing claims that America is in decline, he points to past periods of soul-searching and self-doubt where public sentiment was far more pessimistic and from which America emerged stronger than ever. On the other hand, he challenges those who look upon American decline with equanimity and questions their “expectation, if not assumption, . . . that the good qualities of [the present world] order—the democracy, the prosperity, the peace among great powers—can transcend the decline of American power and influence.”

He advises the United States to continue on its present course, maintain its global posture, and retain or expand alliance relationships negotiated during the Cold War. But here is a key point: Kagan concedes that Americans could opt for a different course. We could shed our global burdens, focus on rebuilding the country’s strength at home and expect—or merely hope—that others will uphold the liberal order as American power retreats. That we are afforded such a choice today is itself a historical anomaly—and something of a luxury. “Someday,” Kagan suggests, “we may have no choice but to watch it drift away.” In the meantime, we don’t have to—and he hopes that we do not.

It is a familiar refrain. But, as with Kagan’s earlier works, The World America Made combines questionable international-relations theory, questionable economics and questionable politics. To the extent that Kagan has had a hand in building today’s world, he has constructed it around too much military capacity in the hands of a single power and too little capacity in the hands of nearly everyone else. The result is a wide and growing gap between the promises Washington has made to protect others from harm and America’s political will to honor those promises if they ever come due.

The world is both more complicated and more durable than Kagan imagines. The United States does not need to police the globe in order to maintain a level of security that prior generations would envy. Neither does the survival of liberal democracy, market capitalism and basic human rights hinge on U.S. power, contrary to Kagan’s assertions. Americans need not shelter wealthy, stable allies against threats they are capable of handling on their own. Americans should not fear power in the hands of others, particularly those countries and peoples that share common interests and values. Finally, precisely because the United States is so secure, it is difficult to sustain public support for global engagement without resorting to fearmongering and threat inflation. Indeed, when Americans are presented with an accurate assessment of the nation’s power relative to others and shown how U.S. foreign policy has contributed to a vast and growing disparity between what we spend and what others spend on national security—the very state of affairs that Kagan celebrates—they grow even less supportive.

KAGAN’S FLAWED analysis begins with a fundamental misconception about the international system and the relations of states within it. His worldview perceives two types of countries: those that are congenitally incapable of dealing with urgent security challenges on their borders or in their respective regions; and a crafty, rapacious few who are forever scheming to intimidate, disrupt or simply devour the hapless and the helpless. Within this dichotomy, however, is a third sort of country, the only one of its kind. The United States enjoys a privileged place in the world order, explains Kagan. Its power is unthreatening because it is relatively distant from others. And, according to Kagan, the costs of this power are easily borne by the wealthiest country in the world.

Kagan’s world order “is as fragile as it is unique,” and “preserving [it] requires constant American leadership and constant American commitment.” The message today is consistent with that from sixteen years ago when he and William Kristol first made the case for what they called “benevolent global hegemony.”

In other respects, however, the story that emerges from The World America Made is subtly different. Anticipating a rising tide of pessimism and gloominess within the American electorate, Kagan at times resorts to the tone of a pep talk. Whereas he once highlighted the “present dangers” confronting the United States (in a volume coedited with Kristol, published in 2000), he now says the world today isn’t as dangerous as it once was—during the Cold War, for example, or at other periods in American history. Looking ahead, he says, China has its own set of problems, is unlikely to make a bid for regional hegemony and is unlikely to succeed if it tries. Likewise, we shouldn’t be overly frightened by China’s growing economic power, Kagan explains, which will lag well behind that of the United States for years. Other global challenges are more modest still.

The object of these relatively optimistic assessments is to convince Americans that they can manage to hold on to their position of global dominance for many years without bankrupting themselves financially or exhausting themselves emotionally. This line of argument cuts against Kagan’s other claims, however, both in this volume and elsewhere, that the United States should spend even more on its military and that Washington should use this military more often, and in more places, than it has in the recent past.

In other critical ways, Kagan’s assessment of global politics has remained remarkably consistent, even if the tone of this current volume is slightly less alarmist. In the past, he has argued that the world would collapse into a brutal, Hobbesian hell if the U.S. military were smaller and fought in fewer wars or if the U.S. government were less inclined to extend security guarantees to other countries. Today, he merely suggests such a scenario is possible and warns it would be foolish to gamble on the outcome.

Kagan’s too-casual rejection of any reasonable alternative to American hegemony reveals the crucial flaw in his reasoning, however, given that he predicts we might not be afforded a choice in the future. If the United States can’t sustain its current posture indefinitely, a wiser long-term grand strategy would set about—preferably now—easing the difficult and sometimes dangerous transitions that often characterize major power shifts. Rather than continuing to discourage other countries from tending to their security affairs, the United States should welcome such behavior. Kagan’s reassuring tone—about China’s unique vulnerabilities, for example—actually buttresses that competing point of view. After all, if a distant, distracted hegemon like the United States can manage the challenge posed by China, and if it can do so while preventing wars and unrest in several other regions simultaneously, then Asian nations would be at least equally capable of accomplishing the same task given that they will be focused solely on their own security primarily in just that one region.

KAGAN REFUSES to consider this possibility. He writes that the “most important features of today’s world—the great spread of democracy, the prosperity, the prolonged great-power peace—have depended directly and indirectly on power and influence exercised by the United States.” It follows, therefore, that the world would become considerably less democratic, less prosperous and less peaceful if the United States were to withdraw militarily from Europe, Asia and the Middle East. 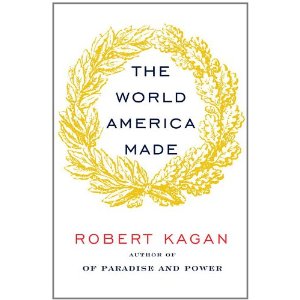