PEOPLE THINK of history in the long term, but history, in fact, is a very sudden thing.” This observation from one of Philip Roth’s novels applies with particular force to the contemporary cult of human rights. Most people today believe that the prominence of rights is the almost-inevitable conclusion of a long process of moral development. Originating in Greco-Roman philosophy and Judeo-Christian religion, so the story goes, the idea of human rights expressed a cosmopolitan vision of universal humanity, which went on to find expression in modern times in the English Civil War, the French and American Revolutions, various antislavery movements, the Second World War, and the struggles against colonialism and racism. The history of the West is a continuous unfolding of this majestic idea, and if contemporary Western societies are superior to others, past and present, it is because of their respect for personal liberties.

Cited at the beginning of The Last Utopia by Samuel Moyn, professor of history at Columbia University, Roth’s observation encapsulates the central theme of Moyn’s brilliantly illuminating book. For anyone who reached adulthood in the United States and other Western countries during the past ten or twenty years, human rights are an immemorial inheritance, only now properly developed, which provides the only possible framework for moral and political thought. Over the last few decades, Moyn writes:

a new field has crystallized and burgeoned. Almost unanimously, contemporary historians have adopted a celebratory attitude toward the emergence and progress of human rights, providing recent enthusiasms with uplifting backstories.

According to this now-deeply-entrenched view, the journey toward our present state of virtue and enlightenment was a long but straight road:

In recasting world history as raw material for the progressive ascent of international human rights, [many contemporary historians] have rarely conceded that earlier history left open diverse paths into the future, rather than paving a single road toward current ways of thinking and acting.

This was not just a way of reading (or misreading) history. The focus on human rights had large practical consequences. From Jimmy Carter onward, this tenet came to be invoked as “the guiding rationale of the foreign policy of states.” Almost never used in English before the 1940s, “human rights” were mentioned in the New York Times five times as often in 1977 as in any prior year of the newspaper’s history. By the nineties, human rights had become central to the thinking not only of liberals but also of neoconservatives, who urged military intervention and regime change in the faith that these freedoms would blossom once tyranny was toppled. From being almost peripheral, the human-rights agenda found itself at the heart of politics and international relations.

In fact, it has become entrenched in extremis: nowadays, anyone who is skeptical about human rights is angrily challenged to explain how they can condemn Nazism—as if the only options that exist in political thought are rights-based liberal universalism or out-and-out moral relativism. The fact that those who led the fight against Nazism understood the conflict in quite different terms, with Winston Churchill seeing it simply but not inaccurately as a life-and-death struggle between civilization and barbarism, is not considered relevant.

The contemporary human-rights movement is demonstrably not the product of a revulsion against the worst crimes of Nazism. For one thing, the Holocaust did not figure in the deliberations that led up to the Universal Declaration of Human Rights adopted by the UN in 1948. As Moyn notes, “In real time, across weeks of debate around the Universal Declaration in the UN General Assembly, the genocide of the Jews went unmentioned in spite of the frequent invocation of other dimensions of Nazi barbarity.” And Raphael Lemkin, the moving spirit in promoting the convention against genocide that was adopted a day before the Universal Declaration, was fully aware that at the time, genocide was by and large considered separate from (and perhaps less important than) human rights. Contrary to received history, the rise of human rights had very little to do with the worst crime against humanity ever committed.

INDEED, THE primacy of this ideal is very recent. In the late 1970s, clearly a full thirty years after World War II, it all came about quite abruptly. And the ascendancy of rights as we now understand them came as a response, in part, to developments in the academy. As Moyn astutely notes, “In a tiny bibliography on rights composed by political theorists in 1978, next to no authors treated ‘human rights’ as such.” My own experience confirms the accuracy of this observation. When I began teaching political philosophy in Britain in the early seventies, rights theory was only one among several traditions, and by no means the one most closely studied. There were versions of utilitarianism, some scornful of rights (with Jeremy Bentham describing them as “nonsense upon stilts”), others that accepted that rights have important social functions (as in John Stuart Mill), but none of them asserted that rights were fundamental in ethical and political thinking. There were various kinds of historicism—the English thinker Michael Oakeshott’s conservative traditionalism and the American scholar Richard Rorty’s postmodern liberalism, for example—that viewed human values as cultural creations, whose contents varied significantly from society to society. There was British theorist Isaiah Berlin’s value pluralism, which held that while some values are universally human, they conflict with one another in ways that do not always have a single rational solution. There were also varieties of Marxism which understood rights in explicitly historical terms.

In all of these perspectives, human rights were discussed—when they were mentioned at all—as demands made in particular times and places. Some of these demands might be universal in scope—that torture be prohibited everywhere was frequently (though not always) formulated in terms of an all-encompassing necessity, but no one imagined that human rights comprised the only possible universal morality. “A universalism based on international rights,” as Moyn writes, “could count as only one among others in world history.” Until but a few decades ago, anyone who had been well educated understood that most of the varieties of universalism that have ever existed either lacked the very idea of rights (as in Aristotle and Thomas Aquinas) or else invoked them in order to reach authoritarian conclusions (as did Thomas Hobbes).

Undermining the narrative of a virtually inevitable human evolution, the notion that rights are the foundation of society came only with the rise of the Harvard philosopher John Rawls’s vastly influential A Theory of Justice (1971). In the years following, it slowly came to be accepted that human rights were the bottom line in political morality. Early modern political theorists like John Locke may have asserted the importance of rights in ways that helped shape the American Constitution; but rights were dictates of natural law, which had to be obeyed because they emanated from God. Immanuel Kant’s view was essentially the same. The belief that rights are fundamental in political ethics is a late twentieth-century fancy. Interestingly, Rawls did not argue for any sort of global governance—as Moyn points out, Rawls accepted “the plurality of nations.” Also, unlike a later generation of philosophers, Rawls was conversant with other traditions of thinking and took them seriously. Moyn explains, “When John Rawls famously reclaimed individual rights . . . it had no apparent consequences for either the general or the philosophical ascent of human rights (an expression Rawls did not use).” Even so, it was Rawls’s work that was chiefly responsible for the triumph of the narrow type of liberalism that has since dominated Anglo-American political philosophy. The result was to promote a type of liberal legalism in which the rule of law was simply assumed, while politics was virtually ignored.

THE MOST damaging effect of Rawls’s work was the neglect of the state that it produced. The natural rights that were asserted in the early modern period by Hobbes and other thinkers were closely linked with the modern state that was emerging at the time. As Moyn notes, the “freestanding individual of natural rights . . . was explicitly modeled on the assertive new state of early modern international affairs.” Hobbes was insistent that the right to self-preservation can be protected by a state that accepts no limits on its authority to act—otherwise, there is only a “war of all against all” in which everyone must be on guard against everyone else. Other rights theorists such as Locke, more recognizable as liberals in a modern sense, wanted to impose substantive limits on what governments could legitimately do; but they too were clear that rights could only be respected in the context of an effective modern state. Human rights might in some sense exist prior to the state, but without the state they counted for nothing.

Consider interwar Central Europe, an example Moyn does not discuss. Most likely nothing could have prevented the dissolution of the Hapsburg monarchy, but the result of actively promoting its dismemberment, as Woodrow Wilson did, was a “war of all against all” among the fledgling nation-states, in which minorities were the losers (none more so than Jews, who had nowhere to go). This was not an unpredictable development, for as should be clear, human rights and the nation-state are inextricably joined. As Moyn puts it, “The alliance with state and nation was not some accident that tragically befell the rights of man: it was their very essence, for the vast bulk of their history.” The Universal Declaration of Human Rights, which seems to embody the modern-day utopia, encouraged visionaries to look to a time when rights would transcend sovereign states, but still the focus on individual countries remained. 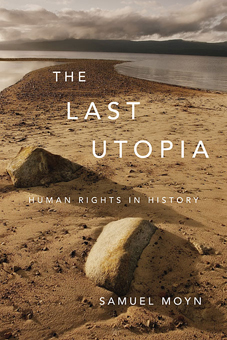