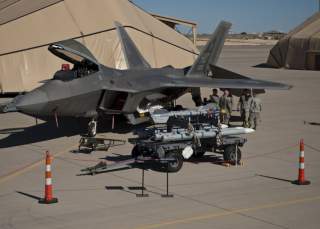 The ongoing and often contentious debate concerning AirSea Battle has focused on whether the concept constitutes an adequate “strategy” for the United States. Moving beyond the simple observations that a concept in itself is not a strategy, and that most aspects of the Pentagon’s AirSea Battle effort remain (at least publicly) unclear, the debate tends to conflate proposals for methods of countered anti-access strategies with the necessary planning for potential wars of necessity. Unlike wars of choice, wars of necessity can’t just hurt America or our economic or political standing in the world—but can literally destroy us. To understand how the debate gets off track requires us to examine, first, the history-spanning strategy that is anti-access warfare, and, second, the reality that anti-access warfare is but one aspect of a much larger planning challenge—how to deter or, if unfortunately necessary, successfully fight a major war against a hoping-to-someday-be-a-near-peer-competitor opponent. Hopefully, the AirSea Battle effort is more about the latter rather than merely the former, as important as it is.

Those number of nations against which we could potentially fight a war of necessity remains mercifully small: China; Iran; North Korea; Russia in the “near abroad” or in the eastern NATO states. Most other conflicts that we could potentially intervene or get drawn into by our own political decisions are indeed wars of choice. Syria, for example, is a humanitarian disaster with tremendous suffering, but if the United States does not intervene, the effects on us remain indirect. At worse, an Assad victory will result in greater Iranian influence in areas where they already have influence. Morality or support for democracy aside, it will not shake our position in this world. This is not to say that it may not be appropriate to intervene, only that we should not build or optimize our armed forces to fight in Syrias. We should optimize our military strength to break through the anti-access networks that will constitute the initial and (if we are successful) dominant operational phase of a war of necessity. Given the relative global military power today and for the immediate future—at least the next twenty years—any war of necessity (and some wars of choice) will require a U.S. capability to defeat anti-access/area-denial weapons and strategies.

What Makes the Concept of Anti-Access Warfare Unique?

Anti-access and area denial are modern terms referring to war-fighting strategies focused on preventing an opponent from operating military forces near, into or within a contested region. Today anti-access and area-denial strategies—sometimes combined as anti-access/area denial or abbreviated as A2/AD—are designated in our national strategic guidance as primary strategic challenges to the international security objectives of the United States and its allies and partners. However, in addition to anti-access and area denial being modern terms and strategic challenges, they are techniques of strategy that have been used throughout military history. They are also historical components of grand strategy, having been used or attempted by Imperial Japan, Argentina after capturing the Falklands/Malvinas, Nazi Germany in the later stages and Great Britain in the opening phases of the Second World War, Ottoman Turkey, Elizabethan England, ancient Greeks versus the Persian Empire, and others. Along with the obvious military aspects, anti-access strategies include political, diplomatic and economic tactics, something that official documents, such as the CJCS Joint Operational Access Concept (JOAC), acknowledge but have not examined.

Denying access to an enemy is a natural objective for any defender and should be considered an integral component of any military campaign. However, the terms anti-access and area denial—as currently used—are specifically meant to denote a strategic approach intended to defend against an opponent that is judged to be of superior strength or skill in overall combat operations. If the opponent is allowed to use this superior strength or skill, it is feared that the defender would likely be defeated at the point of contact. Therefore, the objective of an anti-access or area denial strategy is to prevent the attacked from bringing its operationally superior force into the contested region, or to prevent the attacker from freely operating within the region and maximizing its combat power.

The uniqueness of the anti-access approach is that it is specifically designed to prevent regional access against an out-of-area global power that the defender cannot otherwise defeat. The impetus for its modern adoption was the primary “lesson learned” from the Gulf War of 1991, where an American-led coalition strongly entrenched in the theater collapsed a numerically superior army in days.

From History to Today

Despite their defensive essence, anti-access and area-denial strategies are not exclusive to a defending or status quo power or to a tactically weaker opponent. For example, Imperial Japan’s war against the United States in the Pacific from 1941 to 1945 was an anti-access strategy designed to preserve aggressive conquests achieved in Asia starting with Japan’s capture of Manchuria in 1931 and continued in the wake of the Pearl Harbor attack. By the time American forces could respond effectively, Japan had already consolidated the core of its wartime empire and its conquest of the oil-rich Dutch East Indies was underway. Its objective was now to prevent reentry to the western Pacific by the one opponent with the potential for strategic superiority. With elimination of U.S. forces from the Philippines, along with defeat of the British and Dutch, the Japanese were now the tactically superior force in East Asia and the western Pacific. Their strike at Pearl Harbor was not intended as a prelude to an invasion of Hawaii or the continental United States, but to knock over the chessboard so that the Americans would decide that—as far as the Asia-Pacific region was concerned—it was too costly to put their pieces back into the game. This constitutes a classic anti-access approach.

This is the same logic that would guide Chinese (and, to a more limited extent, Iranian) use of an anti-access approach. Conducting an anti-access defense would be in conjunction with forcible annexation of Taiwan or other territorial incursion (or attempt to close the Strait of Hormuz). There are simply no other reasons for a major war in those regions. The point of activating an anti-access campaign is to prevent outside interference in such objectives. In such a scenario, China would not need to “defeat” U.S. naval and air forces—only to keep them out of the region through attrition. At the same time, it would seek to neutralize or destroy land-based U.S. air forces (and perhaps allied air forces) already in the region.

What Strategy Should We Adopt?

Returning to the question of whether AirSea Battle constitutes a strategy in itself, the answer itself is “no.” Countering an anti-access network—whether Chinese, Iranian or other—is simply a necessary aspect of an overall warfighting (and political and economic) strategy. However, it may be the dominant aspect for two definite reasons. First, if we can’t successfully defeat anti-access networks and enter the region, all our other power projection forces become pointless—they can have no effect on the outcome. Secondly, an obvious capacity to neutralize anti-access networks could act as an effective conventional deterrent—causing potential aggressors to conclude that their actions are a gamble that could be reversed.

But if not a strategy, should the AirSea Battle concept be pursued as an organizational, doctrine development, or acquisition effort? Absolutely. Without definite efforts and capabilities to counter a Chinese anti-access network, we will lose our ability to militarily intervene in a conflict in East Asia, and perhaps our influence in Asia-Pacific overall. That’s what China wants.

In addition to pursuing the AirSea Battle initiative as a first step in ensuring the joint force can counter such objectives, other necessary, but thus far underdeveloped efforts would include political, diplomatic, and economic measures to help buttress Asian allies and potential partners in countering China’s creeping sovereignty efforts such as the recently declared Air Defense Identification Zone (ADIZ). The ADIZ is simply a “peacetime” effort to provide “legal” justification for developing a robust anti-access network to intimidate its neighbors (and—in PLA logic—us, too).

Would offshore control be an alternative strategy that we should adopt, as T.X. Hammes has suggested? To start off, it may appear mere semantics, but “offshore control” is a poor choice of name, because it can be easily confused (at least by non-specialists) with Harvard professor Stephen Walt’s proposed strategy of “offshore balancing”—essentially a strategic of perpetual non-interference in others’ conflicts and of “no permanent allies.” Offshore control does not advocate such, but the “offshore” term seems to imply a detachment from the individual security objectives of Asian allies—a more “remote” position that would not seek to offer any reassurance that the United States would challenge an opponent’s (China’s) anti-access strategy and network. Admittedly, that may be a caricature of the offshore-control approach, but I would more properly characterize it as wartime campaign planning rather than a strategy per se—with some logically sound operations, such as cutting off all maritime commerce (particularly oil) from China—exactly how we started to collapse the Imperial Japanese anti-access effort. It may evolve to more of a strategy with more development and increased inclusion of supporting political, diplomatic and economic policies. (But T.X., please change the name! Doing so will reduce some of the misgivings of critics right off the bat.)