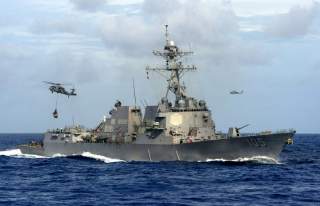 With ample economic influence to throw around, Beijing also sought to divide ASEAN, in this instance by buying off Cambodia, the 2012 ASEAN chair and host of the ARF. Chinese President Hu Jintao visited Phnom Penh prior to the summit with promises of millions of dollars in investment and assistance. This was enough to convince Cambodia to limit discussions on sensitive maritime issues that would have highlighted China’s assertiveness. Unable at the ARF to agree on language for the South China Sea, the body failed to issue a joint communiqué for the first time in its forty-five-year history.

In the end, not all of these schemes worked perfectly, but together they amounted to a Chinese victory at Scarborough Reef. China possessed vastly superior maritime capabilities to the Philippines and demonstrated unmatched resolve. Beijing further isolated the Philippines and ensured that ASEAN was unable and unwilling to come to its rescue. Meanwhile, Beijing worked to keep Washington at bay by relying on civilian maritime vessels and forcing the issue into the broader context of U.S.-China relations.

Whether or not Beijing made all of these moves consciously and strategically is now immaterial. The cumulative effect was the same and the learning since then is readily apparent. Although the precise future of China’s assertiveness is yet unknown (even in Beijing), China has already sought to replicate aspects of this model against Japan, Malaysia, the Philippines and Vietnam.

THERE are those in the United States who do not view Chinese assertiveness with particular alarm. From their vantage point, accommodation is preferable to risking war over “a bunch of rocks.” But U.S. officials ought to think seriously whether they are willing to accept a regional order in Asia in which might makes right.

Carefully accounting for events at Scarborough Reef, the United States should seek to enhance regional stability by pursuing three lines of effort toward U.S. allies and partners, the region as a whole, and, of course, China.

A first-order task for the United States is to help build the capacity of regional states to deter and counter China’s maritime coercion. This does not mean instigating arms racing or setting unrealistic goals of trying to match China’s enormous material advantage. Instead, U.S. assistance should focus on supporting maritime law enforcement capabilities, including the requisite intelligence and maritime-domain awareness assets, such that countries can more confidently and capably police their shores. More widely shared and available information would also have a deterrent effect against those who might otherwise test the bounds of acceptable behavior.

In the longer term, the United States should help regional countries develop asymmetric capabilities to deter high intensity conflict. China has pursued a strategy of “anti-access/area denial” to challenge the force projection capabilities of the U.S. military in East Asia. Relatively weaker powers could instill greater caution in Beijing by adopting a similar approach to dissuade Chinese coercion.

Second, the United States should seek to strengthen multilateral cooperation and limit China’s ability to isolate individual states. Washington can contribute to an increasingly networked security environment by supporting the burgeoning bilateral and multilateral intra-Asia security ties that are developing between countries in the region, including Australia, India, Japan, the Philippines, Singapore, South Korea and Vietnam.

Even more important is that the United States continues to be a leading supporter of ASEAN and ASEAN-centered institutions. The participation of major outside powers, in venues like EAS and the ASEAN Defense Ministers Meeting Plus, enhances ASEAN’s cohesion and purpose by providing critical injections of legitimacy and capability.

Furthermore, building multilateral habits of cooperation and developing diplomatic and institutionalized dispute mechanisms will be necessary to provide alternative peaceful means for managing and resolving crises outside of military flexing and other forms of coercion. It is imperative that U.S. officials commit to a high-tempo engagement calendar in Asia that holds steady even when international crises arise elsewhere.

Supporting adherence to international law is essential. The Philippines has turned to the International Tribunal for the Law of the Sea to adjudicate a number of disagreements with China in the South China Sea. The United States should get behind this process and—in advance of the ruling—call upon China to abide by the tribunal’s decisions and push influential allies and partners including Australia, the European Union, India, Indonesia and Singapore to do the same. Admittedly, the unwillingness of the U.S. Senate to ratify the UN Convention on the Law of the Sea makes this more difficult, to the detriment of U.S. national interests.

While the United States continues to support China-ASEAN negotiations on a Code of Conduct, it should pursue a parallel track of encouraging stabilizing confidence-building mechanisms, such as crisis hotlines between claimant capitals, and other maritime safety initiatives, like incidents at sea agreements, which could be adopted in the near term. In future crises, U.S. diplomacy should prioritize helping allies and partners develop and maintain open communication channels with China, rather than falling into the role of intermediary.

Finally, the United States will have to consider new avenues for affecting Chinese decision making. To date, private diplomacy and strong public rhetoric have proven insufficient. So too have U.S. urgings that China act like a responsible great power.

The problem is that China is unlikely to cease its persistent territorial nibbling in the East and South China Seas as long as Beijing believes it can do so at minimal downside risk. At the end of the day, U.S. officials will have to consider when and how to impose costs on China if it continues attempting to revise the territorial status quo in Asia.

In the context of continued robust engagement with Beijing, U.S. policymakers should also explore—and signal a willingness to use—a range of cost-inducing measures within the bounds of maritime security if China’s assertiveness grows chronic, threatens U.S. allies and partners, and undermines regional stability.

Potential policy tools for cost imposition include enhancing the U.S. military presence in the region, expanding the scope of U.S. security guarantees with allies and partners, broadening the types of military capabilities the United States is willing to transfer, altering the U.S. position of neutrality on certain sovereignty disputes, offering legal assistance to countries willing to participate in international arbitration and treating Chinese maritime vessels as naval combatants if they engage in aggressive and physical coercion.

None of these options should be taken lightly, but U.S. recitations of national interests in the South China Sea are largely irrelevant if they cannot credibly answer the simple retort of: “Or what?”

Scarborough Reef was a tactical victory for China, but it also revealed Beijing’s formula of exploiting weaker states, dividing multilateral institutions and keeping the United States on the sidelines. To stem the dangerous trend of mounting Chinese assertiveness in its near seas, Washington should focus on building partner capacity, strengthening regional institutions and ultimately making clear to Beijing that the “Scarborough Model” will no longer be cost-free.

Ely Ratner is deputy director of the Asia-Pacific Security Program at the Center for a New American Security. You can follow him on Twitter:@elyratner.