Preparing for War with China 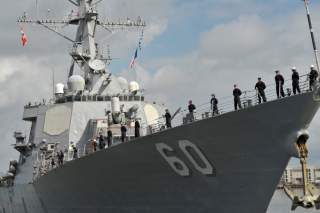 For an operational concept that has never been published, the U.S. military’s AirSea Battle doctrine has elicited some fiery commentary. Or maybe it stokes controversy precisely because the armed forces haven’t made it official. Its details are subject to speculation. The chief source of information about it remains an unclassified, unofficial study published in 2010 by the Washington-based Center for Strategic and Budgetary Assessments.

The debate over AirSea Battle swirls mostly around technology and whether the doctrine is aimed at China. To answer the latter question first: Yes, it is about China. It has to be.

This is no prophecy of doom. From a political standpoint, war with China is neither inevitable nor all that likely. But military people plan against the most formidable capabilities they may encounter. And from an operational standpoint, China’s People’s Liberation Army (PLA) presents the sternest “anti-access” challenge of any prospective antagonist. Either strategists, planners and warfighters prepare for the hardest case, or the United States must write off important regions or options.

The PLA thus represents the benchmark for U.S. military success in maritime Asia, by most accounts today’s crucible of great-power competition. Other potential opponents, notably the Iranian military, fall into what the Pentagon terms “lesser-included” challenges. If U.S. forces can pierce the toughest anti-access defenses out there—if they can crack the hardest nut—the softer defenses erected by weaker opponents will prove manageable.

That focus on anti-access is why AirSea Battle is about China—because it’s the gold standard, not because anyone expects, let alone wants, war in the Western Pacific.

Anti-access is a catchy new name for the old concept of layered defense. Like all naval officers, I was reared on it. Think about air defense. When an aircraft-carrier task force goes in harm’s way, commanders dispatch “combat air patrols” around the fleet, concentrating along the “threat axis,” or direction from which air attack appears most likely. Interceptors from the carrier air wing constitute the first, outermost line of defense.

Then come surface-to-air missiles from the fleet’s picket ships. If attackers get past the fighter- and missile-engagement zones, “point” defenses such as short-range radar-guided missiles or gatling guns essay a last-ditch effort. Each defensive system engages assailants as they come within reach. Multiple engagements translate into multiple chances for a kill, improving the fleet’s chances of withstanding the assault. A corollary: defenses become denser and denser as an adversary closes in.

The same logic applies to coastal defense but on a grand scale. A nation intent on warding off adversaries fields a variety of weapons and platforms to strike at sea and aloft. These systems have varying ranges and design parameters. Tactical aircraft can fly hundreds of miles offshore and fire missiles that extend their lethal reach still farther. Missile-armed patrol boats have small fuel tanks and limited at-sea endurance, so they stick relatively close to home. The same goes for diesel-electric submarines.

If anti-access is about mounting layered defenses, AirSea Battle is about developing technologies and tactics for penetrating them. Thus, in some sense China and America are replaying the interwar years. War planning commenced in earnest following World War I. Imperial Japan planned to shut the U.S. Pacific Fleet out of the waters, skies and landmasses within a defense perimeter enclosing the Western Pacific, the China seas, Southeast Asia and parts of the Bay of Bengal. Not to be outdone, U.S. Navy officers devised and tested out war plans for breaching Japanese anti-access measures.

Weirdly, planners on both sides of the Pacific largely agreed on how the coming conflict would unfold. Japan would lash out at the U.S.-held Philippines. U.S. leaders would order the Pacific Fleet to relieve the islands, confronting the Imperial Japanese Navy with a numerical mismatch. Anti-access, Japanese style, meant forward-deploying warplanes to islands along the defense perimeter and submarines to adjacent waters. Aerial and undersea attacks would whittle the U.S. fleet down as it lumbered westward—evening the odds before a decisive battle somewhere in Asian waters.

The hardware dimension of the U.S.-China strategic competition, however, is inextricable from the all-important human dimension. Weapons don’t fight wars, as strategic thinkers from U.S. Air Force colonel John Boyd to Chinese Communist Party chairman Mao Zedong remind us; people who operate weapons do. Both individuals and the big institutions they serve have deep-seated worldviews and ideas about how to cope with the strategic surroundings. A culture that comports with strategic and operational circumstances represents an asset. A culture that flouts reality is a huge liability.

So the struggle between AirSea Battle and anti-access is about more than developing gee-whiz technologies. A culture war is brewing between two great powers with very different conceptions of the relationship among land, air and sea power. And again, ideas matter. As naval historian Julian S. Corbett explains, armaments are “the expression in material of strategical and tactical ideas that prevail at any given time.” What hardware a nation’s armed forces acquire speaks volumes about how strategic leaders think about war—and how they may wage it.

China conceives of land-based forces as intrinsic to sea power and has done so at least since the inception of the People’s Republic. This composite conception of sea power comes as second nature for the PLA. Mao Zedong reportedly issued the PLA Navy’s founders three curt instructions: “fly, dive, fast!” Commanders, that is, premised maritime defense on short-range aircraft flying from airfields ashore, diesel submarines diving beneath the waves, and fast patrol boats armed with guns and missiles. These were the ancestors of today’s ultramodern anti-access force.

Maoist China viewed sea power as more than the fleet. It was an amalgam of seagoing and land-based platforms and weaponry. Accordingly, the navy remained close to home throughout Mao’s long tenure as CCP chairman. That’s markedly different from the U.S. Navy, which kept squadrons on foreign station from its earliest history. Forward deployment is in American seafarers’ DNA. Think Thomas Jefferson and the Barbary Wars. China, by contrast, has not forward deployed warships since the Ming Dynasty—and even then it did so only intermittently. The ongoing counterpiracy deployment off Somalia thus marks a break with centuries of historical practice.

The PLA Navy has remained true to its Maoist history even while constructing a blue-water fleet. Coastal defense remains the service’s core function, although it has vastly expanded its defensive zone.

If the PLA Navy needs to reinvent its institutional culture to operate far from Chinese coasts, the U.S. military faces an even stiffer cultural challenge in orienting itself to new realities. The post–Cold War U.S. military came to see naval power as a supporting arm of land power. The U.S. Navy projected power onto distant shores, supporting the army, Marines and air force as these sister services prosecuted air and ground campaigns in theaters such as Iraq and Afghanistan.

Facing no competitor of the Soviet Navy’s stature, the U.S. Navy leadership issued guidance stating that the navy could assume it commanded the sea. There was no one to contest its mastery. Thus, in the words of the 1992 directive "...From the Sea," the service could “afford to de-emphasize efforts in some naval warfare areas.” In practice, that meant capabilities like antisubmarine warfare and mine countermeasures—capabilities critical to surviving and prospering in anti-access settings—languished for two decades.

Only now are they being rejuvenated. As the anti-access challenge has come into focus, the navy has started scrambling to upgrade its weaponry and relearn half-forgotten skills. In all likelihood, the air force is in worse straits. Despite Billy Mitchell’s early experiments with using air power to defend American coasts—remember his famous 1920 sinking of a battleship from the air—the modern U.S. Air Force does not consider fighting at sea one of its central purposes. The services have some way to go before they can put forth the cohesive effort AirSea Battle demands.

In short, the Asian continental power takes a holistic view of sea power, while the power that rules the waves thinks of sea power as subsidiary to land power. This cultural inversion would favor PLA defenders in a U.S.-China war. After all, fighting offshore is familiar terrain for them, whereas U.S. leaders long assumed they no longer had to fight for sea control. The services must dispel that ingrained assumption. The advantage goes to China unless the U.S. Navy and Air Force undertake a cultural transformation ahead of time, learning to work together in the maritime domain.

Reinventing military institutions in peacetime invariably poses a high-order leadership challenge. It often takes some trauma—like defeat—to clear minds. What to do, short of that doomsday scenario?

First, we need an official AirSea Battle concept to jolt the services into action and impart direction. Let’s publish one. Second, the navy and air force must embrace the concept, forging themselves into a joint weapon of sea combat. And third, national leaders must hold the services accountable for this project. Franklin Roosevelt once compared the U.S. Navy to a pillow. Civilian officials could punch it as hard as they liked, but it sprang back to the same shape. One suspects the U.S. Air Force bureaucracy is the same way.

James Holmes is an associate professor of strategy at the Naval War College and a contributor to Competitive Strategies for the 21st Century, just out from Stanford University Press. The views voiced here are his alone.