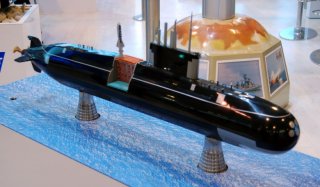 Naval analysts for some time have derided the status of the Russian Federation Navy (RFN), falling from its elevated Cold War status as an American near-equal, to an obsolescent non-operational force through the first decade of the 21st century. This less-than-graceful degradation has effectively ceased with a newly invigorated shipbuilding budget, the delivery of a number of warships and, most importantly, the redeployment of this once proud navy into the world’s oceans.

Vladimir Putin’s call for upgrades in all Russia’s armed forces has especially resonated in Main Navy Headquarters. While the Russian shipbuilding infrastructure continues to be plagued with flaws and shortcomings (discussed below), there is overwhelming evidence that Russia is once again embarking on an aggressive naval shipbuilding program. While RIA Novosti’s report that the RFN will receive 36 warships in 2013 is an exaggeration because it includes numerous small craft, all the arrows are up when discussing Russian naval modernization. The government’s announced allocation of four trillion rubles ($132 billion) between now and 2020 for new warships and submarines constitutes roughly a quarter of Russian armament procurement. To keep this in perspective, this is several-fold larger than previous shipbuilding budgets and approximately half of the U.S. Navy’s similar account. Over the last two decades, it was not uncommon for the Russian decentralized system of obsolescent shipyards to build ships and submarines predominantly for export. The lone Russian “keeper” might have been under construction for well over a decade before it’s commissioning. Today, Russia has closed many smaller shipyards and consolidated the remainder under centralized control.

In turn, it has embarked on aggressive building programs for its Project 22350 (Admiral Gorshkov-Class) frigates with 5 under construction in St. Petersburg and three more planned before 2018. Similarly, Project 11356 (Admiral Grigorovich-Class), being built in Kaliningrad, will deliver at least one hull per year through 2016. Advertised for their stealthy characteristics, several Project 20380 (Steregushchiy-Class) corvettes have joined the force and three more are under construction in two different shipyards. The plan is to construct a total class of eighteen. A large number of smaller corvettes and missile patrol boats, destined largely for the Caspian Flotilla, are also nearing completion.

Submarines, always a strength of Soviet shipbuilding, remain prominent in current Russian plans. Not only is the RFN already operating Yuri Dolgorukiy, the first of the new Project 955 Borei-Class of eight planned nuclear ballistic missile submarines, the second and third, Aleksandr Nevsky and Vladimir Monomakh, are undergoing sea trials. Project 885 (Yasen-Class) nuclear attack submarine Severodvinsk is undergoing sea trials with a total of eight programmed for construction between now and 2020. While the troubled Project 677 (Lada-Class) diesel submarine will be limited to three, Russia continues to produce improved Project 636 (Kilo-Class) diesel submarines for domestic use and export, most likely to India, Vietnam, and Algeria.

For the first time in Russian history, the Russian Navy is modernizing courtesy of a NATO partner as Moscow has purchased two all-purpose 26,000 ton amphibious ships of the Mistral-Class from France.

Equally notable is that the Russian Navy is once again visible on the world’s oceans. The fall of the Soviet Union marked the almost instantaneous disappearance of Russian warships. Over the past 20 years, RFN deployments beyond home waters were marked as signal events because of their rarity. This has changed. Russia’s Navy Commander-in-Chief, Admiral Viktor Chirkov, now regularly conducts interviews on Russian warships’ “expanded ocean presence”. Through October 2013, the RFN has made 96 port visits, a 35% increase over the previous year. Time spent underway – perhaps the best indicator of a fleet’s readiness – has increased by 15% over 2012. The Russian fleet is conducting exercises with numerous nations in all the world’s oceans while both sharpening warfighting skills as well as showing off ships for potential export. Most notable are their expansions in the Mediterranean Sea and Arctic Ocean.

During the Cold War, the Soviets routinely had 30-50 ships plying Mare Nostrum on any given day. However, between 1990 and 2011, it was usually taken for granted that there would be no Russian naval presence whatever. This has changed abruptly with Defense Minister Shoygu’s announcement in December 2012 that Russia would develop a permanent task force of up to 10 ships in the Mediterranean, drawing on resources from all its fleets. This force has been operating coincident with the international incident in Syria and has recently been augmented by the arrival of Russia’s ‘aircraft carrier killer’ Varyag and battle cruiser Peter the Great last month. Admiral Chirkov confirmed that the Russian navy will operate “particularly close to Syrian shores” in support of Russian interests.

Global climate change along with increasing discoveries of oil, gas and minerals in the Arctic have piqued Russian Navy interest in the region. Their 2007 symbolic photo emplacing a Russian flag on the ocean floor of the North Pole was a clear signal to the world of its intentions. Now that the Northern Sea Route (the Arctic Ocean channel adjacent to Russian territory) has been open to commercial traffic over the last several years, the Russian Northern Fleet flagship, Peter the Great, has led a naval flotilla transiting its length. Moscow has also decided to reopen a defunct naval base on Novosibirsk Island and to create ten search and rescue bases scattered along the Arctic Coast in anticipation of forthcoming cruise ship transits along the Northern Sea Route. The RFN will also be joined by units of the Naval Infantry, Special Forces, Air Force, Army and Coast Guard in what can only be seen as a militarization of the region. The world’s largest icebreaker fleet is being augmented by three nuclear icebreakers.

To note that this expansion is enduring growing pains would be an understatement. The most glaring defect is the continued failure of Bulava, the solid propellant submarine-launched missile, to be fitted aboard the Borei-Class submarines. Without it, these submarines cannot conduct their primary mission of strategic nuclear deterrence. Additionally, the A190 gun for Steregushchiy-Class corvettes has delayed deliveries of this class. Delays in the production schedule for a number of ships and submarines for engineering failures are still commonplace as are instances of overall shoddy workmanship. In fact, retired Russian Navy admirals see the problem as systemic by criticizing Russia’s centralized shipbuilding organization under the United Shipbuilding Corporation (OSK), comparing it to a “pieman stitching shoes”. A large contributor to this problem is the exodus of skilled tradesmen from the shipbuilding industry. Corruption, ubiquitous in the Russian economy, is reportedly also part of doing business in shipyards. Admiral Chirkov has attributed the recent fire that broke out during the repairs of a nuclear submarine to the “lamentable condition of ship repair enterprises in the Far East”. Overall, ship repair facilities must be judged as inferior to their western counterparts.

Even with all its warts, Russia’s navy is a force in ascendance, growing in size, sophistication, and ubiquity. It is experiencing reasonable growing pains, some of which could be considered scandalous in proportion. Given the centralized state control of its shipbuilding industry, it is not likely that Russian naval industrial capacity will ever be marked by either flexibility or creativity. However, the Russian navy ensign, the St. Andrew’s Cross, will increasingly be seen in the world’s harbors and maritime choke points, a sight vaguely reminiscent of the good old days of the Cold War.

Tom Fedyszyn is the Director of the Europe-Russia Studies Group at the U.S. Naval War College, Newport R.I.  His latest article on the Russian Navy is in the December 2013 issue of the U.S. Naval Institute Proceedings.