The Pivot Didn't Cause China's Misbehavior 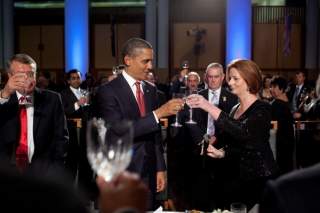 You've pulled a nifty diplomatic hat trick when you convince your main competitor to blame himself for your bad behavior—and to consider canceling his opposition to that misbehavior to mollify you! Yet China might pull off such a feat if it protests so long and loudly against the Obama administration's "pivot" to Asia that Washington desists from supporting its allies there. And acting put-upon is a task at which Chinese officials and pundits excel. Once isolated, weaker Asian nations would find it hard if not impossible to buck China's will—which is precisely the point for Beijing.

Accordingly, incoming Secretary of Defense Chuck Hagel, Secretary of State John Kerry, and the rest of the foreign-policy community should resist being taken in by a meme that's making the rounds among China-watchers. Writing in Foreign Affairs last fall, Boston College professor Robert Ross established himself as the leading spokesman for this school of thought. In a nutshell, analysts of Ross's leanings maintain that Washington's pivot is fanning paranoia in Beijing. It has goaded an increasingly fretful, increasingly jingoistic leadership into acting against weaker neighbors emboldened by U.S. diplomatic and military support.

War could result should these governments persist in standing up for themselves. Reaffirming its support for Japan, the Philippines, or other Asian partners could embroil the United States in a conflict not of its making and deeply inimical to its interests. Better for Washington to curtail this misbegotten, self-defeating enterprise before things turn ugly in the East China Sea or South China Sea.

This account—U.S. challenge, Chinese reply—makes perfect sense at first glance. On close inspection, not so much. Beijing started asserting itself around four years ago, after years of conciliating fellow Asian powers. Chinese vessels "harassed" the survey ship USNS Impeccable in the South China Sea during the spring of 2009, long before the pivot officially debuted. Beijing submitted its famous map of the South China Sea to the United Nations a few weeks later. Inscribed on the map is a "nine-dashed line" within which China claims "indisputable sovereignty" over the sea and any land features.

The nine-dashed line encloses an estimated 80 percent of Southeast Asian waters, including waters apportioned to coastal states under the law of the sea. Beijing has pressed its claims with mounting fervor ever since. Last summer, for instance, it tried to auction off much of Vietnam's exclusive economic zone (EEZ) to foreign firms for oil and gas exploration. That was after China's maritime enforcement services asserted squatter's rights to Scarborough Shoal, an atoll well within the Philippine EEZ. There they remain.

Is U.S. policy is to blame for such shenanigans? It's hard to see how. The pivot combines physical power with political purpose. If Chinese officialdom is sincerely worried about the maneuver—and not just making a show—it must be responding to American purposes, American power, or both.

First consider the policy driving the pivot. U.S. policy swiveled long after China made its turn to bareknuckles diplomacy. Secretary of State Hillary Clinton announced the pivot in Foreign Policy in 2011. Her essay hardly could have prodded Beijing into action before she wrote it. No causation here.

What about power, then? Here again, the sequence of events doesn't gibe. In material terms, a de facto pivot began by 2006, when the U.S. Navy commenced transferring submarines to its Pacific Fleet. The undersea pivot is complete. Some 60 percent of the submarine fleet now calls the Asia-Pacific home. The United States thus started committing military assets to Asia long before China started acting out. Published shortly afterward, its 2007 Maritime Strategy furnished the overarching logic for the rebalancing process—a strategic realignment that Beijing took largely in stride.

Is Washington mounting a massive buildup to overawe Beijing? Hardly. Last year Secretary of Defense Leon Panetta announced that around 60 percent of the navy will ultimately be based in the Pacific or the greater Indian Ocean. But over half of the fleet is already there. The rest, around twenty vessels, some of them light craft such as the navy's new Littoral Combat Ships, will trickle into the theater over the next seven to eight years. Three new ships per year isn't much of a stimulus. So much for a naval race that provokes aggressive Chinese conduct.

Here's a more pedestrian explanation, but one that conforms to the principle of parsimony known as Occam's Razor. When it felt ready, circa 2009, China started pursuing the political and territorial aims it has openly advertised. It started matching policy with power. Beijing believes the trendlines favor it, with the People's Liberation Army's naval buildup progressing nicely and the U.S. Navy coming under heavy budgetary strain. And true to time-honored diplomatic practice, it's attempting to isolate outmatched competitors from their most likely source of outside help.

Inveighing against the pivot, then, is one handy wedge to drive between America and its regional allies—forestalling U.S. diplomatic and military support while improving Beijing's prospects of prevailing in maritime controversies without resort to arms. But the facts provide scant backing for Chinese complaints. In short, there is no cause-and-effect relationship between U.S. actions and China's bellicose turn.

Keep on pivoting, Washington. As for expert advice relating to China: caveat emptor.