Ukraine's Revolution: A Fight the West Can’t Afford to Win 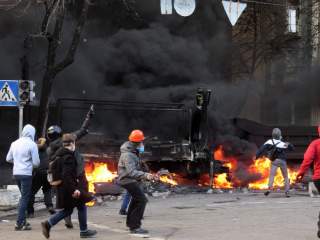 TV cameras inside Ukraine are now focused on the scramble to form a government, the rumblings of restive ethnic Russian-dominated provinces, and the hunt for president-turned-fugitive Viktor Yanukovych. But behind the scenes, outsiders—Russians, Europeans and Americans—are already positioning for the next stage of Ukraine’s convulsions.

Begin in Moscow. The Russians don’t have good options this week. Their man is on the run, and a new government is coming together. Russia can’t afford chaos in Ukraine, because Vladimir Putin’s government needs its natural gas to flow smoothly through Ukraine toward Europe so that European money can flow smoothly into Russian state coffers. A Ukraine split in two would create a Western Ukrainian Republic that quickly joins NATO, generating a new source of long-term friction right on Russia’s doorstep. Nor can Russia help Ukraine’s ethnic Russians by giving ethnic Ukrainians good reason to exclude them from government or target them for attack.

In the months to come, however, Russia will have ample opportunity to play its traditionally active role in Ukraine’s domestic politics. Even if Europe and the International Monetary Fund step forward with substantial financial help, Ukraine will still need heavily discounted Russian energy and a steady flow of commerce and investment in both directions across the Russian-Ukrainian border for the foreseeable future. That’s two crucial sources of Russian leverage with a direct impact on Ukraine’s economy. Russia will never simply surrender its influence in Ukraine.

Then there is the far-from-united European front. The sense of urgency created by violence and white-hot media focus have moved European governments to prepare emergency financial support. Once Ukraine forms its government, a combination of European governments and institutions will offer infusions of cash large enough to allow the IMF time to form a strategy for the next couple of years, but the passage of time will divide European opinion on what to do next.

A crucial question: To help Ukraine through a delicate moment, will the IMF ease the demands it makes on Ukraine in exchange for its help? In the past, the IMF has conditioned any deal with Ukraine on painful economic reforms that a fragile new government might not be able to deliver. Early signs suggest that this time, the Fund may ask for less.

But once the patient is out of critical condition and up off the operating table, can Ukraine stand on its own without a lot more European help? Once the revolution is off the front pages and the sense of urgency has passed, European governments will remember that the redesign of the Eurozone and the needs of weaker economies already in the EU must take precedence. Nor do Europeans want an extended fight with Russia, the country that provides 28 percent of the EU's imported natural gas. It took bloodshed to get the Europeans this involved in Ukraine’s future. What will it take a year from now?

What about Washington? The Obama administration has the same distaste for the Putin regime that the Kremlin has for Obama, but given Putin’s willingness to insert himself in geopolitical hotspots of US interest—places like Syria and Iran—no one in the White House wants a fight. Let Russia’s energy-export-dependent economy rust, U.S. officials might well reason, but avoid a needlessly costly confrontation.

The US will use its IMF influence to help Ukraine along. But it will also encourage Ukraine’s new government to reach out to former Yanukovych allies in business and politics, reassure the governors and citizens of ethnically Russian-dominated provinces, and maintain a delicate Europe-Russia balance, even if Kiev begins a gradual long-term move toward the West. Even if Kiev resists, the Russians will see that Washington isn’t out to humiliate Moscow. Washington understands that Ukraine still needs Russia, and the pleasure of watching Putin’s frustration grow won’t change that.

In short, the battle to draw Ukraine west will demand a carefully managed, month-by-month effort that will last a generation. That’s because, given Ukraine’s fragility, Europe’s needs, and America’s limitations, this week’s revolution is not a fight the West can afford to win.