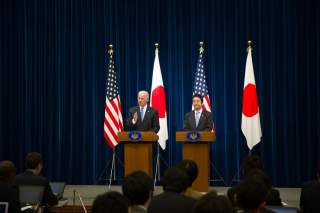 HK: China's recently declared ADIZ over a large section of the East China Sea has certainly rattled nerves in Northeast Asia and in the wider Indo-Pacific region. The timing of such a move, right around when the P5+1 and Iran were finalizing their deal, seems rather interesting. Would you say the announcement was planned right for the moment of a possible deal to lessen the impact? If so, was the move effective?

IB: It’s important to remember that this was a plan Beijing had been developing ever since last summer (if not before), when Japan’s then prime minister Noda purchased more of the Senkaku/Diaoyu Islands, altering the longstanding status quo from Beijing’s perspective. The timing for a response was completely in China’s court. And what constituted an opportune moment? Beijing wanted to maximize the chances of getting this done with limited pushback from the US (pushback from Japan was always guaranteed regardless of the timing). With that as the goal, it was good timing. As you mention, the Iran nuclear deal was underway, for which the Chinese foreign minister was supporting John Kerry in Geneva. But that was just one of a handful of factors. Gary Locke, the US ambassador to China, had just surprisingly announced his resignation with no planned successor. On top of that, between record low approval ratings and a full plate of domestic concerns, Obama’s commitment to foreign affairs was an open question. The government shutdown forced Obama to cancel his trip to Asia for the APEC summit—and a conciliation tour had just been scheduled for April. If ever there was a time to proceed, this was it.

HK: The United States has given guidance to domestic airlines to adhere to the ADIZ and give Beijing their flight information. Do you think this is a mistake or a prudent move considering safety concerns?

IB: It’s certainly a mistake from Japanese prime minister Abe's perspective, where the government gave its airlines no such order. This is much more important to him than to the White House, which is juggling different priorities. Something similar also played out in terms of the White House’s unwillingness to call for a "rollback" of the zone, which Japan explicitly did (the US rejected the ADIZ’s legitimacy, but didn’t go so far as to demand that China retreat). The United States has consistently said there's no light between the American and Japanese positions here. But that's simply an artful (or, to be blunt, a less than true) way of describing the dynamic.

In many ways, that is actually similar to the situation between the US and Israel with regard to their views on Iran, and the analogy is useful to flesh out. Israel remains without question America's most important ally in the Middle East and that is not going to change, but its concerns about Iran are radically greater than Washington’s. However, the United States views Israel as having no other real options on Iran than following its diplomatic lead—no matter what the Israeli government may say publicly—and so has provided extended diplomatic engagement but little willingness to compromise on policy. Accordingly, as the US and Iran have gotten more involved diplomatically, Israel's concerns (and the stresses in the US-Israel relationship) have become more publicly apparent. On all of these fronts, we can draw clear parallels in the present US-Japan relationship. But there is one major, overwhelming difference. The United States’ overall interests in the Middle East and Iran are diminishing over time (while Israel’s concern with Iran continues to grow). The United States’ interests in Asia, however, will only continue to grow, as will the threat that China represents. Thus, longer term, US policy is likely to move more in Japan's direction.

This longer term trend only makes China keener to capitalize on a perceived window of opportunity where they can drive a wedge between the United States and Japan. They’ve had some limited success on this, as I’ve described above. This is precisely why China’s foreign ministry limited its rebukes to the US’s response to the ADIZ, while being vocal and acutely critical of Japan’s.

HK: There has been some speculation based on recent Chinese statements that another ADIZ could be coming—this time in the South China Sea. How likely do you think such a move is and what effect would this have on the region?

IB: While it looks reasonably likely, it’s a lot more dangerous for the Chinese because it has the potential to push the countries with a stake in the South China Sea into a more coordinated, multilateral alliance against them. Thus, the East China Sea was “lower hanging fruit,” and it was a higher priority for Beijing: Japan is the threat of actual size, with the strongest relationship with the United States. While China’s plans may be hard to discern, its tactics are quite clear: China will try to limit multilateral engagement, instead opting for one-on-one negotiations with carrots and sticks, dialing pressure up or down in proportion to its influence over the country in question.

HK: In light of the whole "pivot" or "rebalance" to Asia the Obama Administration has been plugging for the last several years, many have argued that the administration's focus is still too geared toward the Middle East. In fact, two of the biggest supporters of such a policy, Kurt Campbell and Hillary Clinton, have left the administration. What steps can the administration take to re-energize the pivot and reassure allies Washington is committed to the region? An increased military presence? More training and consultation with key allies? More bilateral talks with Beijing to increase mutual trust?

IB:There is certainly merit to the argument that the Obama administration remains too focused on the Middle East relative to Asia. In fact, the pivot has been given a bit of a makeover, as it is increasingly described as a “rebalance.” But the reality is that the United States really is doing dramatically less in the Middle East, whether we look at Iraq, Afghanistan-Pakistan, Egypt or Syria. The potential Iran nuclear deal is also a move to ultimately dial down engagement in the region. And all of this is before the United States’ unconventional energy revolution really hits, further diminishing the US’ reliance on Middle Eastern oil. The bottom line: we will see a dramatically different US footprint in the region.

So part one of “the pivot” still stands. The Asia half is also still very much structurally true—it’s just largely about getting the optics right, confirming priorities, and executing properly. We need to see some senior appointments with real Asia capabilities, ideally bipartisan. The US ambassador to China just resigned; he was nowhere near Jon Huntsman’s capabilities. This presents an opportunity to bring in somebody with world class credentials to replace him.

More importantly, the United States cannot leave TPP on the shelf. Trade deals, where a host of countries must opt in with concessions that are politically difficult domestically, thrive off momentum—it is very dangerous for it to stall. Unfortunately, from a US perspective, there's not a clear path to getting TPP done quickly right now. The White House must prioritize a push on Congress to get Trade Promotion Authority concluded, thus righting the ship on TPP passage. As soon as the healthcare site is adequately fixed, I'd make this, not immigration, top of the table.

HK: As you know, Vice President Biden recently concluded a trip to East Asia. What advice would you give him in working with our allies but also in handling the situation with China and its new ADIZ?

IB: First, just a recap of what Vice President Biden’s trip has accomplished—and what it has revealed. His swing through Asia was initially intended to focus on economics, but ended up consumed by tensions over the ADIZ announcement. Japan hoped the trip would tighten the US alliance; China hoped it would show gaps between American and Japanese policy (while South Korea, solidly in between the two, was happy to maintain the economic focus and take its own "third way" security decisions). The Obama administration sought to draw a compromise between the two—a diplomatic improbability that left all sides publicly saying they won, but Beijing privately happier.

This attempt to compromise and split the difference was firmly on display during Biden’s trip. In Japan, Biden told Abe he would address American and Japanese concerns in great detail to the Chinese leadership. He then focused public statements in Beijing on the need to build a relationship based on mutual “trust” and “candor” between the United States and China, reserving his direct, outspoken criticism to speak out against Beijing’s recent treatment of American journalists (which has deteriorated markedly of late). In short, the Obama administration position is that the US-Japan relationship is closer but the US-China relationship is more important, and the highest priority is not to rock the boat.