The ‘Liberal International Order’ Is Neither Universal nor Exceptional 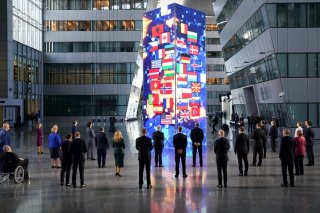 Imagine someone making the claim that ideological commitment to monarchism creates perpetual peace between states that share the values of king and country. History and culture be damned, and never mind that each country has a different monarch. Such a proposition could easily be interrogated by historical research to demonstrate that the claim was false and relied on selective harvesting of case studies to prove a point the claimant already believes valid as an article of faith.

Such a critical eye needs to be turned, mutatis mutandis, to what is called “The Liberal World Order”—a weltanschauung postulating that liberal societies are inherently more peaceful (if not better and superior), that they adopt (or should adopt) values-based activist foreign policies to spread that righteous way of life around the world, and that they form alliances toward advancing liberal ideals or out of mere presumption of shared values and common ideological foes.

The history of republics, as a less common form of government overall, should also bear a similar level of scrutiny. None other than a Founding Father of the United States, Alexander Hamilton, writing in Federalist Number 6, made the case for historical skepticism toward the idea of innate eternal peace among countries with democratic systems and commercial ties. Examining Athens, Venice, Holland, and others, Hamilton observed that the ubiquity of trade and a democratic spirit did little to quench the thirst for war and conquest in those societies. In fact, the young United States split with its mercantile mother culture of Britain while allying with the absolute monarchy of France and then refused to back Revolutionary France in the latter’s fight with Britain, disavowing grand ideological foreign policy projects in favor of Washingtonian realism that advised caution about making permanent attachments to other nations in either enmity or amity.

What the fractious relationship between America and the British Empire over the first century of America’s founding highlights is that cultural affinity and economic ties alone do not trump geopolitical concerns. From a realist perspective, an adversarial relationship between the United States and United Kingdom was avoided mainly because Great Britain lost its greatness and co-equal great power status to a confident America in the aftermath of the Second World War. Post-WWII Britain was severely diminished as a world power while London felt increasingly intimidated by the ascent of the Soviet Union in Europe, thus welcoming its place in the American security umbrella as part of the Pax Americana.

Adopting a pragmatic and flexible, if fickle, approach to foreign policy based on perceptions of interest (that could change over time) is not unique to America. Indeed, historically speaking, prudent foreign policymaking is morally ambiguous and driven less by ideology than by managing external threats. The international system operates on the principle of sovereignty. Above all, states aim to maximize sovereignty and achieve a monopoly of force over their territories; they thus resist the presence of a final arbiter in whatever shape or form they appear—whether that be world government or a more powerful state acting as a world hegemon. This explains why, when it comes to major international incidents, the United Nations finds itself oscillating between being entirely sidelined and acting as a conduit for the will of the world’s major superpowers.

Given the absence of supreme authority to oversee international affairs as a Hobbesian Leviathan, the natural equilibrium in the international system is anarchy. While regimes draw on norms and values (of a particular people) to claim political legitimacy and dominate the political system of their respective country, states—structurally constrained by anarchy—aim at minimizing external threats and maximizing security. Given the nuanced relationship between norms and politics, it is no surprise that regimes revel in idealism (even if at times that is reduced to mere rhetorical ploy and sophistry), whereas states, in the final analysis, engage in realism and prudence. Self-preservation, understood as ensuring the political survival of the state and securing its territorial integrity, is the most basic telos of a state—hence the bare minimum target for any state before more aspirational aims (cf. thumos) that require relative power aggregation to achieve, such as a desire for recognition, international standing, and glory.

In World War II, often viewed as the most ideological war of modern times, a democracy (Finland) was a co-belligerent with the Axis powers while two arguably fascist Iberian powers (Portugal and Spain) mostly upheld neutrality in the conflict, with Lisbon taking a generally pro-Allied stance compared to Spain’s pro-Axis tilt. Capitalist Western nations worked in tandem with the communist Soviet Union to overcome the Nazi threat in a grand entente before falling out over dividing the spoils in the postwar era. Then, in the Cold War, major powers in the Communist Bloc turned their back on international socialist solidarity and pursued non-alignment in a desire to maximize their autonomy. Yugoslavia, under General Josip Broz Tito, defied Soviet hegemony and refused to join the Warsaw Pact. Maoist China’s relations with the USSR deteriorated and led to a deadly confrontation while Deng Xiaoping normalized the People’s Republic of China’s relations with America. Geography and context, it seems, are the key determining factors in geopolitics, not ideological solidarity between distant countries with divergent circumstances. Major powers often compete to maximize autonomy and achieve recognition internationally and are often willing to sacrifice ideology toward those ends.

Advocates of liberal internationalism may point to the present U.S.-led bloc of Western liberal democracies as an exception to this general trend of states engaging in realpolitik interest aggregation, but this conveniently overlooks the fact that the Western alliance relies on the United States’ superior power and influence capability far more than it does on any presumption of America’s exceptionalism as a liberal democratic regime. It is quite conceivable that a powerful liberal rival, if one were to exist, might split the American alliance network much the same way the United States supplanted the British Empire as hegemon after the Great War or when the growing power and ambition of China broke the close relations between Moscow and Beijing during the Cold War.

The emerging multipolar world is a reminder that history did not end with the fall of the Berlin Wall in 1989. In truth, what is exceptional about the last seventy-five years is not America or the liberal order it has forged to serve its interests (or at least those of its elites), but the sheer power that the United States was able to amass owing to its favorable geographic position and relative distance from bloody and costly conflicts across the oceans that guard its borders. And even that exceptional power is not entirely without precedent in the course of human history when compared to the Assyrian, Persian, Roman, Mongol, and British Empires of the past. With the decline of U.S. power and the rise of the rest, especially in the non-Western world, it is no surprise that the liberal world order is appearing increasingly precarious, and the international system is shifting toward multipolarity.

Basing alliances on ideology rather than state interest blinds strategists to the realities of great power competition and morally neutral (minimal or maximal) considerations of interest that underlie the decision-making of “liberal” and “illiberal” states alike. Put simply, making geopolitical decisions prudently requires statesmen to balance their state’s interest against its holistic power capability (including its force projection and military prowess but also its economic strength and diplomatic leverages). Constructing an alliance on the presumption of shared values and moral absolutism also risks creating an environment where the ideological differences between states are exaggerated and inflated into “threats” in order to sabotage diplomacy with ideological adversaries even when strategic interest dictate otherwise. This is evident in the West’s dealings with countries such as Iran, North Korea, and Russia, which are often framed not as the geopolitical menaces that they are but as heinous existential threats, ignoring their marginal power status.

If North Atlantic countries are serious about maintaining the alliance network as a strategic resource, it would be wise for these nations to see such arrangements as they are—aggregations of interests to effect desired geopolitical outcomes—rather than an idealistic and utopian crusade for the soul of the world or as an instrument for advancing abstract universal principles and imposing the values of one state or group upon others. To recognize the historical and conditional forces that enable nations to band together with clear-eyed realism and to fully account for the shared interests among them is to allow the participants to better justify and uphold the alliance.