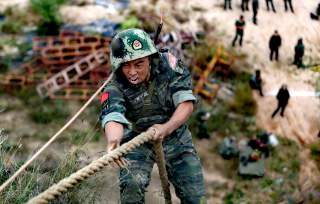 Using the occasion of the Shangri-La Dialogue in Singapore this month, Chinese Minister of National Defense and State Councilor Gen. Wei Fenghe, delivered a sharp message to the United States, which may be termed the “Xi Doctrine” on China’s use of force, after Chinese premier Xi Jinping. Wei declaring both China’s resolve to aggress to advance its interests and a rationalization for the use of force. Wei’s de facto threat of war should not be lost in his nuances, deliberate ambiguity, or in translation. His remarks were so bellicose that the world has noticed, as was certainly intended by the leadership of the Chinese Communist Party (CCP).

Empirical evidence of China’s aggression is increasingly common, from its attempt to dominate the South China Sea, the neo-imperialist effort to gain control of states through the Belt and Road Initiative, to its technological imperialism to control 5G and artificial intelligence technologies. What is rather less frequent are statements from high-level Chinese officials proclaiming the country’s intent to be aggressive and offering an attempted legitimizing principle justifying that aggression.

While much of the content of Wei’s remarks were in keeping with the gossamer pronouncements on China’s peaceful intentions, as well as a paean to Xi Jinping’s leadership, they still conveyed that China is ready and willing to resort to war if the United States stands in its way of global expansion; and they made clear that China must go to war, or even a nuclear war, to occupy Taiwan.

Specifically, there are four elements that comprise the Xi Doctrine and are indications of China’s signaling its willingness to use force. The first component is a new and alarming proclamation of the undisguised threats to use force or wage an unlimited war. China is becoming bolder as its military power grows. This is evidenced in Wei’s muscular remarks on the People’s Republic of China’s approach against Taiwan, his explicit statement that China does not renounce the use of force against Taiwan, and his effort to deter the United States and its allies from intervention should an attack occur. Wei forcefully stated: “If anyone dares to separate Taiwan from China, the Chinese military has no choice but must go to war, and must fight for the reunification of the motherland at all costs.” “At all cost” means that China will not hesitate to use nuclear weapons or launching another Pearl Harbor to take over Taiwan. This is a clear warning of an invasion.

Second, the Xi Doctrine legitimizes territorial expansion. Through his remarks, Wei sought to convince the rest of the world that China’s seizure of most of the South China Sea is an accomplished fact that cannot be overturned. He made bogus accusations, which included blaming the United States for “raking in profits by stirring up troubles” in the region. He insisted that only ASEAN and China must resolve the issue. He claimed that China’s militarization on South China Sea islands and reefs were an act of self-defense. Should this be allowed to stand, then the Xi Doctrine will set a perilous precedent of successful territorial expansion, which will further entice China and jeopardize the peace of the region.

The Xi Doctrine’s fourth element is the mendacity regarding China’s historical use of force and current actions. While the distortions of history were numerous, there were three major lies that should be alarming for the states of the region and the global community. First, Wei said that China had never invaded another country, which is a claim so transparently false it can only be a measure of the contempt he held for the audience. China has a long history of aggression, including against the Tibetans and Vietnamese, and perhaps soon against the Taiwanese. Second, Wei argued that hegemony does not conform to China’s values when, in fact, China proudly was Asia’s hegemon for most of the last two thousand years. Lastly, he claimed that the situation in the SCS is moving toward stability—from China’s perspective this stability is caused by its successful seizure of territory. In fact, the SCS is far less stable as a result of China’s actions. Efforts to counter this grab are denounced by Wei as destabilizing, which is a bit like a thief accusing you of a crime for wanting your property returned.

Wei’s belligerent rhetoric is an indication that the CCP regime faces deep external and internal crises. Externally, the Trump administration has shocked the CCP with the three major steps it has taken. First, it has shifted the focus of the U.S. national-security strategy and now identifies China explicitly as its primary rival—abandoning the far more muted policies of previous administrations. Second, Trump has acted on this peer competitive threat by advancing tangible measures, such as arms sales to allies and the ban of Huawei. Third, the administration has made credible commitments to assure partners and allies to counter China’s aggression and bullying. These have unbalanced the CCP regime, and its natural reaction is to bully its way out. Additionally, the CCP regime has perceived that the world today has begun to consider the negative implications of China’s rise, and the United States is determined to prevent what heretofore had been considered China’s unstoppable rise. From the perspective of CCP, conflict is increasingly seen as inevitable and perhaps even imminent. Wei’s bellicosity should be seen in this light, and the PLA is tasked with fighting and winning the war.

Internally, Xi’s anti-corruption campaign that selectively targets his political rivalries, and his abandoning the established rules such as term limited of presidency, have introduced deep cleavages into the unity of the regime unity. China’s economic slowdown, made worse by the U.S. trade war, is a fundamental challenge to the regime’s legitimacy. Xi’s repression and suppression of the Chinese people, particularly human-rights defenders, Christians, Kazakhs, Uighurs, and other minorities, have miscarried.

Drawing from the pages of unfortunate history, in a classic social-imperialist move, the regime wants to direct these internal tensions outward. At the same time, the nationalistic fervor advanced by the CCP’s propaganda and by the rapid military modernization have made many young militant officers in the PLA overconfident. This is infrequently noticed in the West. They can hardly wait to fight an ultimate war to defeat the arch-enemy. This plainly dangerous mentality echoes the Japanese military’s beliefs before Pearl Harbor.

The bellicosity evinced in Wei’s speech is serious and is not bluster intended to deter. The United States cannot meet China’s threat with half-measures, which are likely to further encourage China’s aggressive behavior. The United States must respond to China’s belligerence with greater strength, adamantine determination, and more vigorous diplomatic and military measures. With the Xi Doctrine, China has proclaimed and rationalized its aggression. A Trump Doctrine forged in response has to reveal to all global audiences, most importantly the CCP leadership, the recklessness of the Xi Doctrine and the supreme folly of aggression.

Bradley A. Thayer Professor of Political Science at the University of Texas San Antonio and is the coauthor of How China Sees the World: Han-Centrism and the Balance of Power in International Politics. Lianchao Han is vice president of Citizen Power Initiatives for China and a visiting fellow at the Hudson Institute. After the Tiananmen Square Massacre in 1989, Dr. Han was one of the founders of the Independent Federation of Chinese Students and Scholars. He worked in the U.S. Senate for twelve years, as legislative counsel and policy director for three senators.