10 Big Ideas to ‘Up America’s Game in the Arctic’ 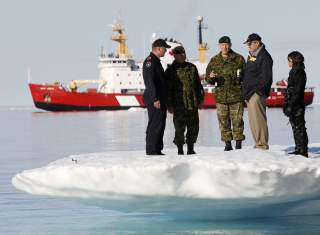 This summer, the Arctic is heating up. For the first time in history, we witnessed new waters open off northern Greenland and a container ship successfully sail through the the most difficult part of northern Russia. But it was Secretary of Defense James Mattis’ unmistakable and inimitable challenge this past June that caught the world’s attention: “America’s got to up its game in the Arctic.” In August, the Naval War College in partnership with Alaskan Command helped answer the Secretary’s call by bringing together an unprecedented gathering of senior military leaders and experts to discuss America’s future in the Arctic. As two Russian bombers were being intercepted off Alaska, leaders in attendance recognized the need to keep an eye on Russia’s military build in the Arctic region. But to the surprise of many, it was the rise and influence of China’s soft power in the Arctic that dominated discussion—a chief priority and strategic challenge shared by all nations that call the Arctic home.

Retreating sea ice and advancing technological capabilities are jointly transforming human access to the Arctic Ocean and adjacent coastlines. The Arctic region has long been recognized as a storehouse of resources, including oil and gas, minerals, rare earths, coal, metals and gems. And as stocks from the world’s two largest fisheries in the Bering and Barents Seas move northwards, the Arctic Ocean may be an emerging fishery of global significance. Tourists are already flooding northwards, hoping to catch a glimpse of a polar bear or walrus before it’s too late. Commercial shipping is ramping up production and testing of ice strengthened fleets to take advantage of shorter routes and open ocean.

In light of these changes, the Trump administration’s National Security Strategy strongly asserts American leadership in the face of great-power competition. Without a bold set of policies and budget initiatives, the United States risks letting China gain the upper hand in its own backyard. The time is ripe to think big, not just for the current political cycle, but for future generations who will inherit a blue Arctic.

What follows are a series of big ideas and initiatives that the White House, Department of Defense, and Department of State, should consider to advance America’s economic and security interests in the Arctic Ocean region. Some of these ideas are inexpensive and can be implemented now, while others are longer term efforts that come with a heavy price tag and significant political capital. If the stakes are as high as the Arctic Maritime Symposium concluded, now is the time for this administration and Congress to truly prioritize the Arctic as a national imperative.

(1) Spearhead a new National Strategy for the Arctic Region.

Our first National Strategy for the Arctic Region was inadequately resourced and no longer reflects the rapidly changing security dynamics in the region. As a result, our northern flank is vulnerable to foreign penetration and control, and some in the region question the intent and commitment of the U.S. government. The White House should spearhead a new national strategy centered on regional economic development and the security of all nations in the region.

The Arctic is a theater where lines of authority converge and responsibilities overlap. It’s too expensive a region to operate in a stovepiped approach that ignores the cost savings and increased effectiveness gained from a joint approach. Globally integrated plans, exercises, and operations for the Arctic are underdeveloped today. To address this shortfall, the United States. should spearhead a new task force that brings together our services, the interagency and international partners to plan and conduct maritime security operations, share information, and enforce regional Arctic agreements (e.g., search and rescue, oil spill response, and fishing moratorium). This effort would promote security cooperation and coordinate country team and partner nation initiatives.

The White House should bring together heads of government from all nations in the region, including Russia, to address regional economic development and security. The summit would promote regional economic development on issues like free trade, oil, and gas exploration, fisheries protection, tourism, and infrastructure development; in addition, it would facilitate discussion of political and military issues, territorial integrity, and the peaceful settlement of disputes. Leading on Arctic economic development will help ensure that we meet our goals of sustainable and environmentally conscious growth, and that Arctic First Nations are included in the conversation. Bringing Russia into Arctic security talks is a pragmatic step that recognizes Russia’s prominent position in the region, and the importance of implementing confidence building measures among all 8 Arctic states and their defense forces.

We need to think of the Arctic as a region. The post Cold War era brought about artificial lines organized around Europe, Asia and North America. Their convergence in the Arctic merits a rethinking and reorganization of our national institutions. First and foremost, the White House should immediately revitalize the Arctic Executive Steering Committee—co-chaired by the Directors of the National Security Council and National Economic Council, respectively. We must also create permanent senior leadership positions at the White House, State, and the Pentagon to develop and implement Arctic policy and strategy.

The maritime border shared by the United States and Russia will be a future hotspot of maritime activity and a strategic choke point for shipping into and through the Arctic. The proximity of Russian and American land masses adjacent to the Bering Strait offer growing opportunities for illicit activity. The U.S. Coast Guard and Russian Border Guard currently consult on fisheries and search-and-rescue coordination, but a broader dialogue on maritime security would enable both nation’s sea services to discuss shared challenges and responsibilities, as well as common principles that can serve as the basis for avoiding unintentional escalation or accidents. Working with Russia in the Arctic may also provide benefits in other areas of the relationship.

Breaking ice is a means to an end that overshadows the broader uses of offshore cutters, small frigates, or destroyers. We need multi-mission ice strengthened hulls that, among many other capabilities, can break ice. Funding of U.S. icebreakers has been overly politicized and ignores the real missions of deterrence, sea control, missile defense, maritime security, and strategic sealift. Labels aside, we urgently need surface platforms that can perform these missions across the Alaskan littoral, north of the Bering Strait, and offshore in the Chukchi, Bering and central Arctic Ocean. In the near-term, the Navy and Coast Guard should examine future surface requirements and deploy together in these waters with the surface ships they have today. There’s no substitute for experience.

Chinese capital is flooding into the Arctic region, threatening to monopolize development and tilt the geopolitical balance. State-directed investment from China cannot be balanced solely by U.S. spending. The White House and State Department should work with our partners inside and outside the Arctic region to raise significant funding for infrastructure development. Providing an alternative source of capital to fund new deep water ports, airports, roads, high speed rails, and fiber-optic networks will give Arctic nations choices when it comes to investment partners. An Arctic Development Bank would support development in the region using a free-market approach that’s transparent, accountable, and trustworthy.

(8) Invest in Science to Better Prepare for a Blue-Water Arctic.

The United States cannot adequately prepare for an opening Arctic without understanding how it’s changing. When will summer sea ice vanish? What will ice look like during the rest of the year, and what will operating conditions be ten, twenty and thirty years from now? While we have robust short-term modeling of Arctic sea ice and other variables, we lack long-term modeling of the Arctic environment in ways that will let us plan for 2040 or 2050. Our competitors are funding Arctic science to gain a toehold in the region and support their long-range plans. Science has always been the foundation of America’s economic strength and security in the Arctic, and we cannot underfund this critical enabler.

(9) Declare October 18 as National Arctic Day, in commemoration of America’s Purchase of Alaska.

The United States is an Arctic nation. However, most Americans have little to no attachment to the Arctic. Alaskans already celebrate October 18 as “Alaska Day” in commemoration of the Alaskan Purchase. Making this day a national holiday would educate all Americans about the countless and often-overlooked historical, cultural, environmental, economic, and security ties between the United States and its fourth coastline.

Change is taking place right now faster than models have predicted. If it continues in a linear fashion, it may be possible to see an ice-free Arctic in the summer by 2040. By then, the United States will need a Navy and Coast Guard that can operate in and through the Arctic Ocean year round. Basing the resurrected 2nd Fleet in Greenland will provide a strategic deterrent and a rapid response force. Equally important, a new naval base in Greenland will demonstrate U.S. commitment to its Arctic allies and to its global maritime presence. America must act now, and boldly in the Arctic before it’s too late.