1916: The WWI Battles That Remade Europe 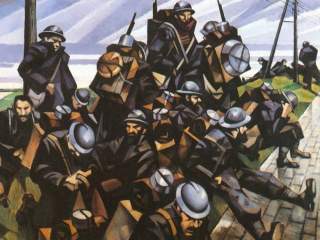 The centenary commemorations of World War I will undoubtedly concentrate on a trio of well-known battles; Verdun, the Somme and Jutland. All three ended inconclusively, and all witnessed tremendous bloodshed. Verdun and the Somme etched themselves into the national consciousness of France and Great Britain, respectively, while Jutland helped transform naval architecture.

But 1916 also witnessed a number of other, lesser known battles. Although they lack the same resonance in the West, the outcome of these battles helped determine the post-war map of Europe, not to mention the nature of warfare for the next generation.

Although World War I began as a conflict between Serbia and Austria-Hungary, the focus of war quickly spread to the Eastern and Western Fronts, where Germany would struggle to simultaneously defeat France, Russia and Britain. The war between Austria and Serbia would continue, however, with the tough Serbs resisting repeated Austro-Hungarian offensives. The entry of Bulgaria into the war in 1915, however, spelled the end for the Serbs; they lost their supply lines, became overstretched and eventually retreated to Italy.

After the Serbian collapse, only Montenegro remained in the Triple Entente’s corner. Montenegro had joined the war out of pan-Slavic sympathies with the Serbs, then had withdrawn into its own borders after the Serbian defeat. The Central Powers decided to exploit the moment to end the war in the Balkans, and pushed into the tiny country. After a short offensive, the Austrians forces rolled the country up and forced a capitulation. Along with the conquest of most of Albania, this freed up a greater portion of the Austrian military for much more lethal fights against the Russians and the Italians.

The West has almost no memory of fighting on the Eastern Front in World War I. Nevertheless, some of the most innovative tactics came out of the Russian and German experiences of the first Eastern Front. The Brusilov Offensive of 1916 was among the most important of these engagements.

As part of an agreement to launch coordinated offensives against the Central Powers in mid-1916, Russian General Aleksai Brusilov prepared for a massive attack against the forces of the Dual Monarchy in Galicia. The Russians substantially outnumbered the Austro-Hungarians, and had developed innovative new infiltration and shock tactics. On June 4, Brusilov’s force tore into Austria-Hungary’s defensive emplacements along a broad front. The Russians took the Austrians by surprise, employing a brief bombardment to disorient the defenders, then quickly achieving a breakthrough.

The Russians threw the Austrians back and advanced at a pace unheard of on the Western Front. Impressed by Russian success, Romania quickly threw in its lot with the Triple Entente.  However, Brusilov had no reserves, and Russian armies on other parts of the front failed to coordinate attacks. German and Austrian reinforcements restored the line, and the offensive exhausted itself by September. The Russian Imperial Army would never mount another successful operation.

Battles of the Isonzo

Our memory of the First World War fixates on the Western Front, where the futility of seemingly endless trench warfare scarred a generation of soldiers from France, Britain, Germany, and (eventually) America. An even more futile, repetitive conflict played out along the Isonzo river valley, where Italy hurled offensive after offensive against prepared Austrian defenses.

Austria and Italy would fight twelve Battles of the Isonzo, the last resulting in catastrophic Italian defeat. Five of these battles happened in 1916. None of them nudged the front more than a few miles in any direction. However, the battles helped keep the army of the Dual Monarchy occupied, relieving pressure on the Russians on the Eastern Front and enabling the Brusilov Offensive. They also contributed to the exhaustion, and eventual collapse, of the Habsburg Empire.

Although ruled by a Hohenzollern king, Romania leaned toward the Triple Entente at the beginning of World War I. Bucharest wanted to acquire Transylvania from Austria-Hungary, but stood in a difficult geographic position; only the Russians could supply much military support, and the Romanians had little trust for Moscow.

In late summer 1916, the success of the Brusilov Offensive (and optimism about the latest Italian offensives along the Isonzo) produced high hopes that Austria-Hungary might simply collapse. Not wanting to miss out on the spoils, Romania joined the Triple Entente in late August, launching its large (but poorly trained) army into what it imagined to be the weak underbelly of the Central Powers. However, the Romanians misjudged both the Germans and the Russians. The Russian offensive petered out, and the Germans had long expected Romanian treachery. A devastating German counter-offensive rolled up most of the country, capturing Bucharest in December and driving the remaining Romanian resistance into Moldavia.

The first Battle of Britain began in April 1915, when German zeppelins bombed Ipswich and Southend. Over the next year, airships operated by the German Army and Navy would repeatedly bomb Britain, as the Royal Flying Corps and the Royal Naval Air Service struggled to reply. While the earliest raids did little damage, in 1916 the German attacks began to exact a heavy toll. The British responded with technology and organization; they developed anti-aircraft weapons, better guns on their night fighters and interceptors, and an early warning system that limited casualties. The skies over England soon saw pitched battles between German airships and British fighters, in what amounted to the world’s first concerted strategic bombing campaign.

Although the airships had important advantages, they could not hold out forever against British guns, and British conventional aircraft. Incendiary bullets had a particularly devastating effect, and the Germans eventually gave up on the Zeppelins. Within the UK, however, the attacks galvanized a newfound sense of vulnerability. Finally, an enemy could reach out and touch London; domination of the sea no longer provided a secure defense. In 1917, the Germans would begin to send heavy bombers against London, planes which could outpace the British fighters. The raids eventually resulted in the founding of the Royal Air Force; twenty-four years later, the RAF and the Luftwaffe would replay the scenario, to much more devastating effect.

In all, the battles of 1916 represented an effort, on both sides of the war, to coordinate force and knock particular enemies out of the war. The Germans hoped that Zeppelins would terrify the British public; the Russians, Italians and Romanians hoped that the shaky Austrians would collapse. In the end, however, the Central Powers managed to score real military achievements in the Balkans, while exhausting the Russians. These successes allowed them to continue the conflict for two more years, pushing the British, French and Italians to the brink. More importantly, these battles would foreshadow the tactics (strategic bombing and mobile, “Blitzkrieg” warfare) used by all combatants in the next war.