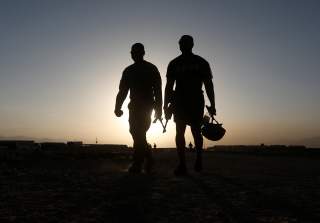 WASHINGTON — National security officials wouldn’t elaborate Friday on the deaths of two U.S. servicemen in Afghanistan. The casualties, whose names were not released at press time, add to a total of four Americans killed in the country on the year. “Every death of an American service member is painful and tragic,” Lt. Col. Daniel L. Davis (Ret.) of Defense Priorities told me. “When the loss of life is in the conduct of a mission that doesn’t serve U.S. interests and should have ended long ago, it is excruciating.”

The deaths come as Washington’s man at the negotiating table with the Taliban, Zalmay Khalilzad, inches closer daily to a prospective deal with the Islamist outfit responsible for protracting America’s longest war. Jason Dempsey, of the Center for New American Security (CNAS) and a veteran of the Afghanistan war, told a Washington crowd Thursday night that the very presence of Donald Trump’s envoy shows that this administration means business in wrapping up the conflict and transferring responsibility to the Afghans. Says Davis: “Before we suffer one more unnecessary casualty—and for the preservation of American security interests—we must withdraw immediately.”

Ambassador Khalilzad faces hurdles on two fronts—pernicious conspiracy theories in Afghanistan and a turbulent political climate back home, should he ever bring back a deal to hoc.

Tribulations ahead are assured: the official government is at the brink, and feels cut out. Circumstances are already at a nadir for the official authorities—2018 was the most violent year on record for the country’s civilians, and elections were recently postponed until at least the fall. The government’s future is far from assured in an Afghanistan stripped of a U.S. presence, as President Trump openly favors. Interestingly, the American-based son of Afghan President Ashraf Ghani is a confirmed Trump supporter. Senior members of Ghani’s government say Khalilzad is a tendentious negotiator. “The reason he is delegitimizing the Afghan government and weakening it, and at the same time elevating the Taliban, can only have one approach,” Hamdullah Mohib, the government’s national security adviser, said last week in Washington. “It’s definitely not for peace.”

The implication is that Khalilzad covets the presidency—or some equivalent, successor office—for himself. Experts on the country and political watchers in Washington reject the contention out of hand. The idea that the United States under Trump would actually expand its role in Afghanistan—by installing a viceroy—is absurd, said Laurel Miller of RAND Corporation Thursday night in Washington; Miller and Dempsey spoke at event put on by the Charles Koch Institute, and headlined by former Senator Jim Webb, who is periodically-mentioned for the Trump cabinet. Adherents to this viewpoint counter that the Trump administration has zigzagged before, as well as considered risky contingency plans for the country: most notably, outsourcing the American show-of-force to Erik Prince, the controversial defense contractor, brother of the American secretary of education and right-wing grandee.

Advisors to Khalilzad insist integrity comes first—and that, for such an acute situation, he’s the essential man. “Ambassador Khalilzad is a rare expert on Afghanistan who understands the key players and political dynamics of both Washington and Kabul,” informs a former aide and close friend.

But even if a deal was hatched, it’s then that the real fun begins—back in Washington. And there is concern on this front among supporters of Khalilzad's approach, and those who favor a negotiated settlement.

Trump’s late-2018 pronouncements that he wants America out of Syria, and a radically scaled- back presence in Afghanistan, have been confronted in 2019 by raw inertia, as well as by knife-fighters in his own midst, most notably John R. Bolton, the president’s uber-hawk national security advisor. Some in the president’s orbit even privately complain of a “President Bolton” usurping Trump’s authority.

Preeminently, Mitch McConnell, the powerful Senate majority leader, has shown his cards as an inveterate champion of the status quo: on policy, the only time he has publicly confronted Trump has been to reject his proposed withdrawal from Syria. The concern is this: even if Khalilzad brings home a long-awaited deal, might it be drowned behind the scenes and in the Congress?