2016: A Clash of Fundamental Visions 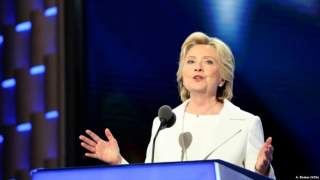 In 1999 Patrick J. Buchanan published a book called A Republic, Not An Empire. In it he declared,

A day of reckoning is approaching. It is my hope that the price in blood, treasure, and humiliation America will eventually be forced to pay for the hubris, arrogance, and folly of our reigning foreign policy elites is not, God forbid, war, defeat, and the diminution of this republic—the fate of every other great nation or empire that set out on this course.

At the time, Buchanan’s words may have seemed hyperbolic. America was at its apex. The Soviet Union had collapsed less than a decade ago. The economy was flourishing. Abroad it had brought Serbia to heel. Terrorism was a distant concern. American military prowess was unchallenged.

No longer. As Hillary Clinton’s speech accepting the Democratic nomination last night made clear, the battle between the traditional and Buchananite views of foreign policy is now joined. Where the Republican party once championed an interventionist and crusading foreign policy, it is now the Democrats who are reclaiming that tradition, while the Trump is Buchanan's heir.

Retired general John Allen’s remarkably forceful speech last night may have been most telling in this regard. It had many traditional conservatives and neocons, who revile Trump as an imposter, swooning last night on social media. The New York Times quotes Pete Wehner of the Ethics and Public Policy Center as observing, “I think they’re trying to become the party of patriotism, the party that loves America, that is proud of America, that defends America.” Thus Allen essentially served as a character witness for Clinton. He depicted her as a tough and sagacious leader who will protect America in a sea of disorder and danger. Allen rejected the kind of realpolitik that sees international relations as a zero-sum game. He dismissed the idea that foreign affairs can be reduced to a “business transaction.” According to Allen, “with her as our Commander in Chief, America will continue to lead this volatile world. “We will defeat evil," he said. "Our armed forces will be stronger,” under Clinton. And he concluded, “Enemies will fear us and we will defeat ISIS… We know that she, as no other, knows how to use all instruments of American power” to ensure the country’s security and freedoms.

In her address, Clinton emphasized that Trump, by contrast, would be a reckless commander-in-chief. “Imagine him in the office facing a real crisis,” she said. “A man you can bait with a tweet is not a man you can trust with nuclear weapons.” Even as she painted Trump as lacking the judgment to preside over America’s nuclear forces, she embraced American exceptionalism, the notion that Washington is uniquely qualified among nations to lead a global charge on behalf of liberty and human rights. “Yes, the world is watching,” she said. “Yes, America’s destiny is ours to choose.”

The rumbustious Trump, by contrast, appears to take a more skeptical view. For him alliances and enmities are impermanent. He seems to be something of a Frederick the Great man. As old Fritz put it, “He who wants to defend everything defends nothing, and he who wants to be everyone’s friend has no friends in the end.”

As always, the question about Clinton is whether she really means what she says. It’s being taken on faith by many neocons that Clinton will be an interventionist president. Certainly her choice of advisers would seem to incline her in that direction. Her endorsements of the Iraq War and the Libya War also seem to suggest that she would be a more forceful proponent of the use of military power than President Obama has been during his two terms. If Clinton is intent on a sweeping domestic program, however, she would at least initially focus less on foreign policy.  Above all, Clinton is the ultimate pragmatist. Her survivor skills, particularly after the disasters of Iraq and Libya, may prompt her to become wary of foreign imbroglios if she becomes president.

The truth is that the very fact that she was even at the podium last night was tribute to her political realism. The number of scrapes that she has survived is almost mindboggling. Whitewater. The Monica Lewinsky affair. The White House travel office scandal. Benghazi. The Clinton Foundation, which the FBI may be currently investigating. Clinton will need to keep reinventing herself for the general election. As she stated last night, “Now, sometimes the people at this podium are new to the national stage. As you know, I'm not one of those people.”

In previous elections, voters have often claimed that there are no real differences between the two political parties. That is emphatically not the case this time. One party is trying to uphold the postwar neoliberal order. The other is morphing into a nationalist and antiglobalist party that repudiates the idea that America needs to set what is wrong aright abroad. “America,” the historian Charles A. Beard declared in 1939, “is not to be Rome or Britain. It is to be America.” With the rise of Nazism, Beard and his acolytes became a footnote in history. But now America is once again facing a decision about its fundamental identity. This election will show which vision of America is about to prevail.