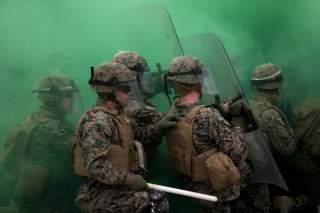 The line of protesters at the Republican National Convention ambled their way into Cleveland’s Public Square, festooned in individual brick wall costumes given a common span by their interlocked hands. Some were chanting pithy slogans of the positivist pro-love type (“The walls that they build to tear us apart / Will never be as strong as the walls in our heart”), some the more adversarial anti-Trump variety (“There is no debate / Trump equals hate”). Others made small talk and flashed immediate, amiable smiles when they caught sight of like-minded observers. Receptive watchers, however, were few and far between. “So ineffective!,” one exception casually declared, to which his companion replied, “It’s just something to do to feel like you’re doing something.” These two passers-by did not betray a partisan affiliation by either their appearance or words. They wore neither the dirt-caked beards of the anarchist left nor the “Hillary for Prison” t-shirts made ubiquitous by the efforts of Alex Jones and Co. Indeed, their tone could neither be called joyous nor rueful; the words uttered were as cut-and-dry as a court reporter’s typeset. As they saw it, what was supposed to occur with a bang instead elicited a mere whimper.

The lack of unrest in Cleveland surprised many who had observed the “bang” quality of commentary leading up to the RNC. A plethora of news outlets—NPR, the Boston Globe, Mother Jones, and New York Magazine among them—had speculated that Donald Trump’s temperament and penchant for reaping fracas could easily cause the convention to degenerate into the sort of outright bedlam seen only once in modern American political history: at the Democrats’ 1968 conclave in Chicago. There, a ten-thousand-strong phalanx of youthful protesters chanting a more forceful line—“The whole world is watching!—battled the Chicago Police Department. Observing a palpable lack of billy clubs, paddywagons, and tear-gas clouds wafting over Lake Erie, though, it became apparent that Cleveland 2016 would not go down in history as a redux of Chicago 1968. Upon reflection, it is clear that in their eagerness to report on history, the media ignored a number of discontinuities that easily explain why protest violence didn’t erupt. And it was the same story the week after in Philadelphia, where deep splits within the Democratic Party were evident—Bernie supporters booing speakers and waving signs for Green Party candidate Jill Stein—but there were no riots or mass arrests.

Beyond the cheap seats of the conventions, the swell of commentary comparing 2016 to 1968 persists: the racial tension, the air of political crisis, the persistence of Roger Stone, the hawkish establishment Democratic nominee, and so forth. Yet on closer examination, the apparent analogies fade. Black Lives Matter isn’t inspiring a million students to walk out of classes (as Students for a Democratic Society did) or taking faculty members hostage (as SDS also did). Inner cities aren’t being burned out by rioters. Afghanistan is not Vietnam. National political figures like RFK and MLK are not being assassinated. 1968 was tragedy; 2016 is farce. Let’s explore the disanalogies in more detail in one of these cases: the expectations that the RNC would be another Chicago 1968.

1. The 1968 Democratic Party’s crisis of legitimacy is not echoed in today’s Republican Party.

As late as 1968, the notion of competing in primary contests in order to win a party nomination was somewhat novel. The process had only been revolutionized by John F. Kennedy eight years prior, mainly to prove his competitiveness as an Irish Catholic in largely Protestant states such as Wisconsin and West Virginia. So in the lead-up to Chicago, a candidate had the choice of either taking his message directly to the voters, or else relying, as generations of previous Democratic nominees had, on courting party elders holding sway over state delegations and translating this backroom support into a wave of momentum come the convention.

The problem with this time-honored method was that Kennedy’s victory over such convention-squatters as Adlai Stevenson and Lyndon Johnson had proved it was no longer the only route to the nomination. By the time then-President Johnson announced his decision not to seek a second full term, two other Democrats, both decidedly anti-Vietnam War, were taking advantage of the accrual of popular support afforded by the primary system—first Senator Eugene McCarthy and his middle-class cohort, and then Senator Robert F. Kennedy’s poorer and more multiracial coalition. Meanwhile, Vice President Hubert Humphrey, hewing to his boss’s Vietnam policy, also adhered to Johnson’s 1960 precedent of ignoring the primary process in order to inherit the nomination on the floor of the Chicago Amphitheatre. The result of this decision must have surprised Humphrey, having decades before established his reputation as a liberal tribune. The diminishment of McCarthy’s ambitions combined with the untimely assassination of RFK left a vacuum in Chicago that a) antiwar Democrats were avid to fill with one of their own, and b) were adamant not be filled by the not-yet-victorious Humphrey, who not only erred in his opinions on Vietnam but had ignored the primary electorate’s initial blessing. Such was the anger that lefty delegates attempted to nominate Ted Kennedy and, failing that, George McGovern. In the aftermath of Humphrey’s defeat, intraparty rules were even changed to better reflect the primacy of primaries.

Donald Trump, to put it simply, does not suffer from the same crisis of legitimacy. Like it or not, here is a man who dispatched sixteen different opponents for the Republican nomination with far greater ease than most would have thought around this time last year. Furthermore, he did this all before reaching Cleveland, competing in every primary and ending up with a greater haul of popular votes to his name than any prior winner to have mounted the RNC stage. For him to have pried a defeat from the jaws of victory would have seen Republicans, in spite of the semantics surrounding bound and unbound delegates, indulge the same democratic deficit that the Democratic leaders of nearly fifty years ago allowed by laureling Humphrey. This, in turn, could have led to the same discord for the drafted Republican ticket that plagued the Humphrey/Muskie ticket as it limped out of the starting gate.

2. Today’s coalition of protesters don’t have as much at stake.

The politics of protest are always at their most exciting when they are imbued with a sense of purpose; vague platitudes can be the terrain of the armchair enthusiast, but men and women of action are needed to translate those platitudes into progress. But while each movement’s grassroots views its particular cause celebre with an equal sense of urgency, to paraphrase from Animal Farm, some causes are more urgent than others.

In Chicago 1968, the primary protest cause was, of course, the Vietnam War. But different segments of the populations experienced different Vietnam Wars. One of the most reiterated lines of argument is that the war was waged on the backs of African-Americans, a sentiment that lent inspiration to the final phase of Martin Luther King, Jr.’s life in activism. Undoubtedly the experience of black soldiers was far harsher than their white brothers-in-arms. But in terms of actual risking of life and limb, the death toll among black soldiers by war’s end in 1973 was 12.5 percent of total casualties compared to a total stateside population of 13.5 percent.

What might be a more telling barometer to measure the headwinds of Chicago’s tumult is the 76 percent of veterans described as lower middle/working class. Not incidentally, a nearly complementary 23 percent of veterans had fathers who possessed “professional, managerial, or technical occupations.” Read into this difference between the hard hat and the white collar and it is possible to discern a common unifying theme: the inaccessibility of a college education. Nothing is much thought now of the banality of the high school-to-college transition, but only in the aftermath of the Second World War with the passage of the G.I. Bill were semesters spent amongst books and professors seen as something other than the preserve of the wealthy. Nevertheless, egalitarianism took time to set in; by 1968, still only 13.3 percent of American males completed four years of college. With student deferment being the primary means of avoiding the draft, Baby Boomer protesters who found themselves statistically boxed out of admission in an increasingly competitive process (a noticeable uptick in college applications occurred in the late ‘60s) had a personal reason to rally outside the convention—without the safety of the classroom, it could have potentially been their war.

From what I observed firsthand in Cleveland, aside from the presence of Black Lives Matter protesting police brutality, the most inveighed against topics were Trump’s policies toward Latin American and Muslim immigration. While it is hard to doubt the sincerity with which many of the white faces (easily a majority of the aforementioned hand-holding protest) denounced these twin tent poles of Trumpism, it is also hard to picture them feeling the same sense of personal fear of deportation as many of the young men in Chicago felt regarding potential death in a rice paddy. This, in turn, robs the protest of what it most requires: dedication to cause that will not just melt away once the Thin Blue Line appears (as most of the Cleveland ones did). Far from a racial or ethnic demographic dictating solidarity, it seems as though a pervading fear among a certain age cohort matters far more.