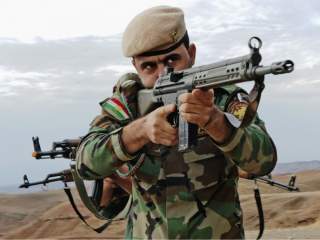 In early February the president of the Kurdistan Regional Government, the autonomous Kurdish region in northern Iraq, called for a referendum on Kurdish independence. “The time has come and the conditions are now suitable for the people to make a decision through a referendum on their future,” wrote Masoud Barzani. He cautioned people that it did would not entail the “immediate declaration of statehood” but rather judging the will of the “people of Kurdistan” and to create the political landscape to “implement this will at the appropriate time and circumstances.”

On February 13, the German foreign minister Frank-Walter Steinmeier took to Twitter to express “serious concern” about plans for a referendum, after reportedly meeting Barzani at the Munich Security Conference. Serious concern would be diplomatic speak for “no.” Critics abroad see the independence referendum as a mix of political strategy and long time policy. Ibrahim al-Marashi, a California-based history professor, wrote at Al Jazeera, “Not only does a call for independence appeal to Kurdish constituents, it serves as a tool to empower the KRG vis-a-vis the central government in Baghdad.” Some have suggested that the referendum is merely cover for the Kurdistan Democratic Party to renew its electoral mandate. Elections scheduled for 2013 and 2015 have been postponed to 2017, an issue that ruffles feathers among the smaller parties in Kurdistan. Currently the KRG is governed by the KDP, the largest party, and the Patriotic Union of Kurdistan (PUK).

If a referendum was merely a cynical ploy, then why is the KRG’s own government being so hesitant about it? Perhaps because this has happened once before. The last time Kurdistan had a referendum for independence was in 2005, when 1.9 million Kurds voted in Iraqi national and KRG regional elections. 98 percent of those casting ballots said yes to independence. In 2014, Barzani told the BBC he wanted to hold a referendum. The Kurdish parliament was supposed to set a date for the decision. Then Kurdistan was attacked by Islamic State on August 3, 2014.

The war against ISIS has illustrated Kurdistan’s de facto independence better than any referendum could. Cut off from Baghdad, the region functioned independently. It had to control its own economy and develop its own oil resources. Its budget was cut from Baghdad as well due to the war, and the KRG was plunged into financial crises, having to support two hundred thousand Kurdish peshmerga fighters on the frontline against ISIS. Iraq’s Baghdad government condemns any attempt by the KRG to secede. “Any unilateral position from any party without coordination or approval will be against the constitution and illegal,” Saad al-Hadithi, a spokesman for Iraqi Prime Minister Haider al-Abadi, told the press in late January.

The KRG has cited referendums in Catalonia, Quebec and Scotland as precedents. But in each of those cases, the national-level democracy accepted the regional referendum and did not actively oppose it, or try to prevent it by force. Neither did foreign governments express opposition to the concept of Scottish independence, or Quebecois independence, for instance. Perhaps a more interesting precedent would be that of Kosovo. In 1991, more than one million Kosovars voted in a referendum for independence from Yugoslavia. Although Serbs boycotted the vote, 99 percent of voters supported independence. After Kosovo had declared independence in 2008, ten years after a U.S.-backed intervention to push Serbian forces from the province, Kosovo Serbs voted in 2012 against accepting Kosovo administration. Unsurprisingly, more than 99 percent of the twenty-six thousand who voted refused to accept Kosovo.

In these instances, the referendums took place against the central government’s wishes. There are many other examples of such referendums, such as the one held in Somaliland in 2001, affirming independence from Somalia. While 112 countries recognize Kosovo, it is notable that many do not, despite the support it has received from the U.S., the EU and the international community. Countries that try to go it alone, such as Somaliland, do not face a bright future. Even countries that have won independence through a referendum, such as South Sudan, have found themselves plagued by internal conflict. The Crimea referendum, in which 96 percent were said to have voted to join Russia, was widely seen as discredited by the fact that the Russian army had occupied the peninsula.

This leaves Kurdistan in an unenviable position. Sero Qadir of the Institute for Research and Development in Kurdistan argues that the referendum is a way to show the public’s approval for independence, but he stresses that with or without the referendum, Kurdistan has a right to independence.

“In my view the referendum is connected with independence and I believe we could have independence anyway without the referendum,” Qadir explained. “When Barzani speaks about it,” he said, it “is because he wants to bring together the political parties and collect them in one idea. . .” Qadir added that in such an event Barzani would have a stronger hand in dealing with Iraq and the international community.

He expects to see independence in 2016: “There are three who support it formally: Israel, Saudi, France. But some smaller countries, we estimate around 40 others, support our independence.”

Dr. Kemal Kirkuki, a former speaker of the KRG parliament, member of the KDP politburo and a peshmerga commander near Kirkuk, wrote in a response to a query about independence that the “self-determination is a natural right” of all nations.

“Self-determination is a right that the International Law, the UN charters and covenants, and Human right laws all agree on—it is an international legitimate legal right for people.” He asserts that any independence would not violate the Iraqi constitution, an issue raised by Baghdad, because the constitution states the various components of the country have taken it upon themselves to “decide to unite by choice.” They can therefore separate by choice.

Qadir argues that as time goes on, the KRG’s independence goals will be eroded and undermined by Iran, and by the region’s Sunni-Shia sectarianism. “If we stay in Iraq we lose what we have, we will be a small government in Iraq which has ethnic-sectarian war and we will end up as [a] slave of Iran.” There is a sense that Iran works behind the scenes to encourage other parties in the KRG, such as the Goran (Change) movement, to oppose independence. Publicly, these other parties claim to support independence, but have not spoken out about the need for a referendum with the gusto of the KDP.

Contending with pressure from within as well as outside Kurdistan’s borders, Barzani will surely face no end of challenges between today and the referendum.