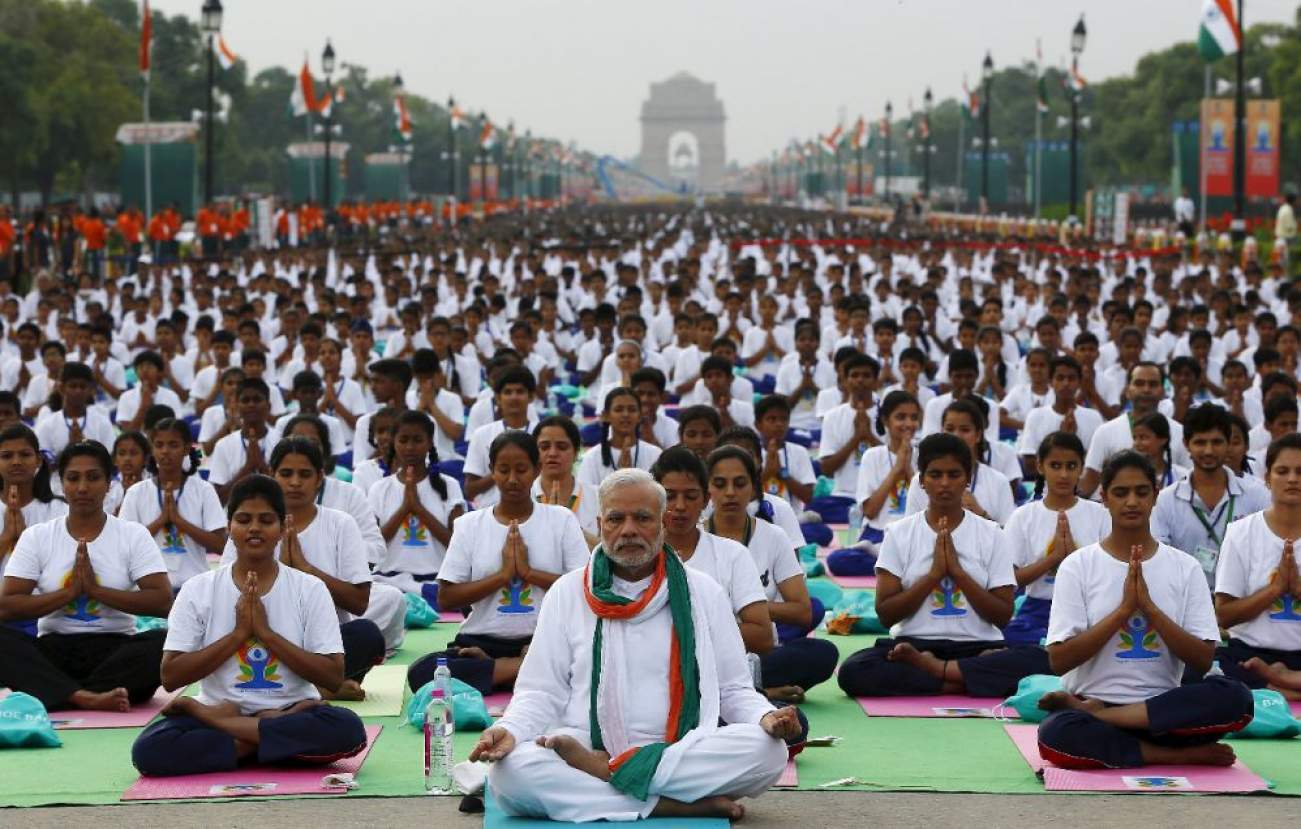 I am currently visiting India, and the political atmosphere in the country today reminds me of that prevalent in 1990. In that year the BJP, now the ruling party but then in opposition, began agitating for building the Ram temple in Ayodhya on the site of the 470-year-old mosque known as the Babri Masjid. Agitation over the Ram Mandir (temple) has soured the communal atmosphere in India as no other incident had since the partition of British India in 1947.

In September 1990, the senior BJP leader L. K. Advani began his famous Rath Yatra (Chariot March) to mobilize India’s Hindu majority to build the Ram temple at the spot where many Hindus believe that the Hindu deity Ram was born. However, this could not be achieved without demolishing the Babri mosque, built during the reign of the first Moghul emperor Babur in the 1520s.

The Hindu nationalist BJP seized upon this emotive issue to reverse its dwindling electoral fortunes by galvanizing Hindu religious fervor on its behalf. Additionally, upper-caste BJP leaders, afraid that lower-caste political mobilization, which was happening rapidly at this time, would render them irrelevant to Indian politics, latched on to this issue with great zeal.

Since upper-caste Hindus numbered less than one-fifth of the Hindu population, the BJP top brass needed a plank that could bind the entire Hindu community into a monolith. The construction of such a monolith was essential for them to continue to enjoy their caste privileges, as well as dominating leadership of the Hindu majority, threatened by lower-caste political parties, especially in the large northern states of Uttar Pradesh and Bihar. However, in order for this strategy to succeed, they needed to manufacture an “other” that could be portrayed as challenging the power and privilege of the Hindu majority. Muslims, the principal religious minority in a country already suffering from the stigma of partition, were conveniently at hand.

The Ram Mandir agitation succeeded beyond the BJP’s wildest expectations. The Rath Yatra rolled through several Indian states, not only mobilizing the Hindu masses on behalf of the Ram temple but also creating bitter divisions between Hindus and Muslims. Advani and his colleagues had achieved their goal by firmly implanting the image of the Muslims as an “other” to be both feared and loathed in the minds of large numbers of Hindus.

The process reached its culmination on December 6, 1992, when a thousands-strong Hindu mob led by Advani and several of his BJP colleagues descended on Ayodhya and demolished the Babri Masjid with bare hands in a matter of hours. The Congress government in New Delhi, led by Narasimha Rao, remained a mute spectator during the entire episode, violating every article of the Indian Constitution that guaranteed protection to religious minorities in India.

The demolition immediately set off communal riots, mostly initiated by kar sevaks (literally “volunteers for a good cause”) returning victorious from Ayodhya and targeting Muslim people and property. Approximately two thousand people, mostly Muslims, were killed. The BJP took full advantage of this Hindu mobilization around the Ram temple issue, eventually coming to power for the first time in New Delhi in 1998. It remained in power until 2004, when it was ousted by a coalition led by India’s Grand Old Party—the Indian National Congress, popularly known as the Congress Party.

2018 appears uncannily similar to 1990. The only marked difference is that the Hindu nationalist BJP is no longer in opposition, but has been ensconced in power in New Delhi for four years. It is also in control of most states. The BJP, therefore, has the entire machinery of state at its command to use for its own narrow political purposes. (This is an established Indian tradition and the Congress had done the same thing when in power.)

Since 2014, when the BJP won the national elections, there has been a marked rise in anti-Muslim rhetoric in India, especially in electronic media. The multiplicity of private TV news channels competing with each other for audience share has encouraged sensationalization, not only of news, but of commentary as well. This has meant that outrageous and irresponsible comments have become the order of the day. Incendiary remarks against Muslims often go unchallenged by anchors with hidden BJP sympathies. There is also organized trolling in the print media by Hindutva groups aimed deliberately at denigrating Islam and Muslims.

The entire atmosphere has become viciously communalized, and anti-Muslim comments that would have been unthinkable even two decades ago are openly expressed in public speeches and private conversations. Senior BJP politicians have several times openly cast aspersions on the loyalty of Muslim Indians to the country. The latest example is the pronouncement by a prominent BJP member of parliament, Vinay Katiyar, on February 7 that Muslims “should go to Pakistan or Bangladesh. What are they doing here?” This statement echoed that made by another senior BJP leader, Giriraj Singh, in the run-up to the 2014 parliamentary elections. In a thinly veiled reference to Muslim Indians, Singh declared that all those opposed to Narendra Modi, the BJP candidate for prime minister, should go to Pakistan, as they have no place in India.

In addition to the escalation of anti-Muslim rhetoric, in the last four years vigilante groups calling themselves “cow protectors” have attacked, killed and injured a number of Muslims and Dalits (formerly known as untouchables), allegedly for trading in cows or eating beef. The prime minister’s silence on this issue has been deafening. Ironically, quite often the police, without adequate evidence, have charged the victims of these attacks for violating the law against cow slaughter.

All this is happening in the lead-up to the parliamentary elections in early 2019. The BJP, which, in addition to its Hindutva card, had come to power promising economic development and prosperity across the board, is now faced with a major problem. Its market-friendly economic policies, which were really a carry-over from the earlier Congress government under Manmohan Singh, have brought economic benefits to sections of the urban population. However, even in urban areas these benefits are very unevenly divided, with the urban poor left out in the cold. The rural sector has, in fact, run into major trouble under Modi’s government despite his rhetoric to the contrary.

Now, with elections around the corner, the Modi government is making an effort to appease the rural farming population and the urban poor. This is clear from the latest budget, presented to Parliament a few weeks ago. However, since resources are limited, this means that the tax load on the urban middle class is likely to grow. When added to the extra burden imposed by the Goods and Service Tax (GST) levied by the government in 2017, this is expected to increase the unease among urban Indians with the Modi government.

The BJP government is faced with a conundrum. On the one hand, much of the rural population is disaffected by its past policies, which is likely to be reflected in their votes in 2019. On the other, the latest budget, when combined with the imposition of GST, could end up alienating those urban sectors that had formed the backbone of BJP support in the past. This is also likely to be reflected in the 2019 electoral results.

The BJP government and its parent body, the RSS, which is the fount of Hindu nationalism, as well as the multiple offshoots of the RSS, have realized that it is almost impossible for the Modi government to return to power on the basis of its economic record. The recent elections to the Gujarat state assembly, where Congress made substantial inroads into the BJP bastion, and by-elections in Rajasthan, another BJP stronghold, where Congress won all three seats up for grabs, have made this lesson clear to the government. Congress’s use of a “soft” Hindutva strategy in Gujarat to successfully wean away votes from the BJP has further convinced BJP strategists of the utility of a Hindutva route to electoral victory.

The RSS and BJP are, therefore, likely to take recourse to the Hindutva card in a big way in 2018 to ensure that the Modi government returns to power in 2019. This has been already demonstrated by the RSS’s decision to launch another major rath yatra beginning on February 13. It will begin in Ayodhya, the site of the Ram Mandir/Babri Masjid dispute, and end at Rameswaram in southern India after traversing a number of states over thirty-nine days. It will be called the “Ram Rajya Rath Yatra” (the Chariot March for Ram’s Rule) and will be flagged off by the chief minister of India’s largest state, Uttar Pradesh—himself a radical and divisive Hindutva political figure. The BJP obviously believes that this chariot march, like its predecessor in 1990, will provide it with handsome electoral dividends.

This march, and the meetings associated with it, will also once again bring the Ram Mandir issue to the forefront of Indian politics. The issue’s prominence has coincidentally been reinforced by the decision of the Indian Supreme Court to take up the Babri Masjid demolition case and deliver a speedy judgment on it soon. The case has been lying there for eight years, on appeal from a judgment rendered by the Allahabad High Court in 2010.