2019 Elections in India: Modi Won't Have It Easy 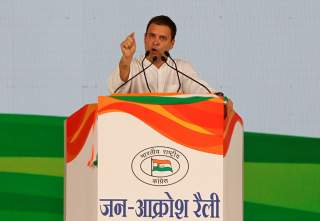 As Indian democracy has evolved, the voting patterns and behaviors in India have also transformed. The advent of social media, rise of populism and the challenges posed by globalization have reshaped voters’ choices and preferences. The local socio-economic and political issues have equally contributed to shifting voting patterns in India.

As a result, elections have thrown up unexpected results that have defied predictions of political pundits and projections of pre-poll surveys. The outcomes of these elections have also shown that the actual voting trends have evolved while our approaches to analyze the voting patterns still remain socially deterministic. Moreover, the West-oriented elite no longer leads India but a more vernacular and local elite, whom voters have elected and consider closer to their roots.

The recent Indian state elections epitomize these voting trends. Contrary to the traditional political punditry that the 2019 elections would be a ritual to re-elect the incumbent Prime Minister Narendra Modi, the miraculous return of the opposition Indian National Congress (INC) under Rahul Gandhi in state elections has thrown a major spanner in Modi’s works.

The INC has thrashed the Bharatiya Janata Party (BJP) in the Hindi heartland states of Madhya Pradesh (114 of 230 seats), Rajasthan (99 of the 200 seats) and Chhattisgarh (68 of the 90 seats), which account for 65 seats in the Lok Sabha (Lower House of India’s bicameral parliament). In the 2014 general elections, the BJP had won 62 of these 65 seats. The road to Delhi in 2019 has become all the more difficult for the BJP. Moreover, the 2019 election will be a referendum on Mr. Modi who is still the BJP’s best bet.

The results of state elections have restored the balance of power in the Indian democracy, and it is has made the 2019 elections well and truly open. Though the BJP would still enter the polls as the favorite, it will not be a walk in the park for the Modi Sarkar. The BJP will have to go back to the drawing board and rejig its election strategy to do well. To win the 2019 election, the BJP will have to win the Hindi heartland but that dominance has been broken by the INC. The BJP needs a major shift in its strategy along with cultivating more electoral alliances and shoring up the existing ones.

When the BJP swept to power in 2014, winning 282 of the 543 seats, it became the first political party in thirty years to win an outright majority in India. Since then, the BJP has enjoyed political dominance across India, particularly in north, west, central, east and northeast India. The defeat in the Hindi heartland is a major setback for the BJP, and it is likely to resonate in the 2019 elections if the BJP’s much-needed course-correction is not exercised. Over the last four and a half years, Narendra Modi’s popularity and the electoral strategies of Amit Shah, the BJP President, have been central to BJP’s dream run. But, it seems that Amit Shah’s electoral model has run its course and it is not delivering the same results anymore.

At the same time, the results of state elections in India have heralded the political revival of the INC and a turning point in Rahul Gandhi’s political career. The INC has gained the much-needed momentum ahead of the 2019 elections. Moreover, the party after this impressive electoral performance will get more space in the media, the main engine that shapes Indian public opinion. The INC also provides a potential center of gravity for other like-minded opposition parties to form an electoral coalition with the singular objective of dethroning the BJP from New Delhi. The kind of strategic regional alliances that the INC will stitch up and sustain in different states will be critical in next year’s elections.

The anti-incumbency factor has cost the BJP big time in state elections. The party could not live up to the hype and over-expectations of its voters. The grandiose promises of job creation for the youth, increasing farmers’ income and development for all have begun to bite. For instance, the farmers are angry for not getting the prices they wanted for their produce. Almost 55 percent of India’s 1.25 billion population is affiliated with the agricultural sector, directly or indirectly, and forms an important voting bloc. In recent weeks, there have been large-scale protests by the farmers in India over falling prices and natural disasters.

Similarly, traders are unhappy with the BJP for slow economic progress, controversial demonetization policy, and the institutionalization of the Goods and Services Tax (GST). Likewise, the lack of jobs and growing unemployment has left the youth disillusioned. Meanwhile, the moderate voters feel alienated because of party’s heavy reliance on the Hindutva rhetoric that has pushed the religious polarization in India to dangerous levels.

The minorities, particularly Muslims, are full of resentment due to growing Islamophobia in India. The emergence of cow-vigilante groups that have tortured Muslims on allegations of eating and trading beef, the so-called “love-jihad” narratives which peddles conspiracy theories that Muslims are dating Hindu women to convert them to Islam have disenfranchised the Muslim electorate.

Meanwhile, the Hindu nationalists are unhappy with the BJP for delaying the construction of a temple at Ayodhya, where a sixteen-century mosque was demolished by Hindu mobs in 1992. The right-wing Hindu extremist groups have demanded the BJP government to proceed with the construction of the temple despite the Indian Supreme Court’s verdict to the contrary.

However, the INC must realize that a win in state elections in no guarantee for a victory in the 2019 general elections. The state and national elections are qualitatively different electoral exercises in their scope and agendas. The results of recent state elections underscore the fall of the BJP, instead of the rise of the INC. Five months is a lot of time and the BJP is quite capable of staging a comeback. So, the INC cannot afford to lower its guard and take the wins in state elections for granted, while the BJP needs to re-think its election strategy and try to win back its alienated voters to do well in the upcoming elections.

The regional and sub-national parties will the x-factor in India’s 2019 election. They would be the kingmakers who will be critical in determining who forms the next government.

The author is an Associate Research Fellow (ARF) at the S. Rajaratnam School of International Studies (RSIS), Singapore. He can be reached at [email protected].