3 Bilateral Agreements That Would Improve Israel's Relationship With America 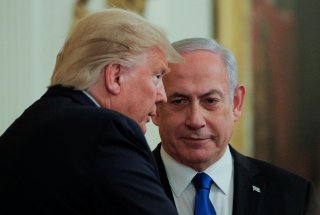 The time has come for the U.S.-Israel relationship to reach full maturity, to move from a relationship of aid and dependency to true mutuality in form and benefit. To accomplish this, U.S. security assistance to Israel should be phased out and replaced by a number of binding bilateral agreements that meet the most essential security requirements of both countries.

Israel has an advanced economy and a sophisticated society. American aid accounts for only about one percent of Israel’s GDP and has become more of a habit and a form of dependency than a real need. Indeed, Israel has more than enough resources at home to pay for American weapons systems. Israel should also want the independence of deciding what it will buy and sell and with whom, an issue that arises often in the context of American concerns about Israeli arms purchase and sales.

An additional factor relates to the impact of this assistance on U.S. policy. American aid to Israel takes up about 55 percent of all American assistance worldwide, and thus the pot of money available for other purposes is extremely limited. Aid to Israel denies the United States the ability to spread its assistance program more widely to countries in much greater need.

In raising the question of stopping U.S. security assistance to Israel, two immediate questions arise. Would such a decision constitute a diminution of America’s support for and commitment to Israel’s security? And, would this signal an erosion in American political support for Israel? These are legitimate questions, for an important consequence of current American aid to Israel is the added deterrence that Israel gains with respect to regional foes.

There is no need to rehearse here the many factors that constitute the ties that bind the United States and Israel. These would not disappear or even be frayed by a change in the assistance program. Political elites in the United States understand well that support for Israel runs deep in the American national psyche, and thus a strong consensus exists within both major political parties to do what is needed to ensure Israel’s well-being. The real argument is that the necessary assurances of such support can be achieved far more effectively and with far greater mutual benefit with alternative policies than through the continuation of U.S. security assistance to Israel.

To replace U.S. security assistance, there are a number of measures that should be undertaken. First, the United States could offer its best efforts to persuade NATO members to agree to Israel's full membership in NATO. We recognize this is a longshot but believe it is worth pursuing.

Whether that succeeds or not, we believe there is a need to consider three bilateral agreements—perhaps treaties, which are more binding—to cement the ties between Israel and the United States. One agreement would define expansively Israel’s access to sensitive U.S. technology and U.S. access to sensitive Israeli technology. The objective would be to try to ensure that both countries can benefit from technology advances. It would include strong safeguards against either country misusing or selling the technology of the other. It would define marketing and business practices that would govern the arms sales policies of the two countries. And it would have a serious dispute resolution mechanism so as to try to avoid the inevitable differences of view that would likely arise on any one of a number of issues.

This agreement would be very difficult to negotiate but it would result in tremendous mutual benefits. It would improve dramatically our mutual military capabilities and avoid much of the rancor that now accompanies issues of access to technology and end-use issues.

A second bilateral agreement would mandate a long term and mutually-funded commitment to joint research and development (R&D) in defined areas, primarily but not limited to military and security programs. The United States and Israel already have such bilateral mechanisms in place, for example, related to agriculture and industrial cooperation research (BIRD, BARD), and many U.S. and Israeli companies already enjoy cooperative relationships. This agreement would significantly boost our mutual capabilities in key areas of national security.

There is a debate on the utility and viability of a third agreement involving mutual defense obligations. The issue has surfaced in the past, with proponents arguing that such a treaty would be a significant boon for Israeli deterrence, in that it would likely define an attack on Israel as an attack on the United States. Such an agreement would also lead to significant new bilateral arrangements relating to, for example, pre-positioned armaments, training, exercises, consultations on threat perceptions, enhanced intelligence sharing, and the like.

The arguments against such a treaty have focused on several critical issues. First, Israeli leaders have always insisted that Israel alone will be responsible for its own security; under such a treaty, especially if there is automaticity regarding a U.S. response to an attack on Israel, this credo of Israel’s would no longer apply. Second, it would be extremely hard to define what would trigger the treaty’s provisions going into effect—a terrorist attack, cross border incursions, conventional attacks only, or nuclear threats only? These challenging questions would also pose difficulties for the United States to decide to extend a defense umbrella over even a strong ally such as Israel when the national sentiment is to refine and even draw down some of America’s overseas military obligations.

As a mature, economically well-off and strong society, Israel should want the independence offered by weaning itself off of U.S. assistance. As Israel’s most committed ally, the United States should want to deepen further its institutional ties with Israel. By ending U.S. security assistance and replacing it with the mechanisms described here, these goals can be accomplished, and the U.S.-Israel bilateral relationship can flourish.

Dr. Yossi Beilin is a former Israeli Minister of Justice, and currently is a visiting Professor at NYU. He initiated the Oslo Process, the Geneva Initiative and Birthright Israel.

Dr. Daniel Kurtzer, former U.S. Ambassador to Egypt and Israel, is a Professor at Princeton University’s Woodrow School of Public and International Affairs.