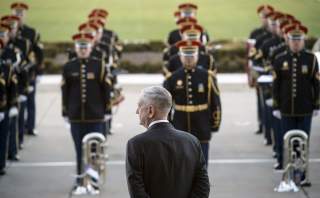 Like many in the broader defense community, I am generally impressed by Secretary of Defense Jim Mattis’s 2018 National Defense Strategy (NDS), which builds on the December 2017 National Security Strategy of President Donald Trump and sets out further guideposts for future defense planning. The strategy has several clear, cogent and convincing emphases. It underscores the importance of technological innovation and development of new capabilities. It insists upon a clear-eyed focus on Russia and China as greater potential threats than ISIS or Al Qaeda. In true Mattis-like fashion, it describes the importance of preserving American operational flexibility and unpredictability (as underscored in the fact that the main body of the document is classified). And it rightly also reiterates a strong commitment to the well-being of America’s men and women in uniform and their combat readiness.

While supporting the strategy’s main emphases, I would nonetheless offer three main caveats or gentle warnings, which are especially important given that we do not know what the classified NDS says and we cannot know what budgets will be available to the Department of Defense in the years ahead to fund the priorities articulated by Secretary Mattis.

One concern is that the NDS, like the NSS as released in December, paints China and Russia with more or less the same brush. Both are indeed serious concerns for the Department of Defense and the nation. But they present very different types of challenges.

Russia is a smaller, ultimately weaker power and yet at present a more dangerous one. We know from President Vladimir Putin’s words and actions that he sees checking American and western influence as perhaps the main goal of Russian national-security policy. He may not be reckless in most situations, but his military forces sometimes do act recklessly near NATO military forces. Moreover, his brutal actions from Georgia to Ukraine to Syria have seriously and directly challenged the international order. He is complicit in the deaths of many people because of the aggressive military actions his forces have taken, and the fact that his nuclear button links to an arsenal of five thousand warheads is highly worrisome.

By contrast, China’s assertiveness in recent years has mostly been limited to uninhabited maritime areas or islands where the direct human consequences of its actions are less risky or sanguinary, and where the international rules of the road are somewhat less clear. China is a rising country attempting to assert itself, but is doing so in ways that are relatively mild by the standards of rising powers. China is still dangerous, and its military budget is already 1/3 of America’s military budget and growing, and its future behavior is of course somewhat hard to predict. But it is, for all its flaws, arguably less intent on directly overturning the current global order and more interested in finding a way to promote its own interests at least largely within that order. It is still dangerous, because a future Chinese leader could be less careful than Xi Jinping and could have even more resources at his or her disposal to pursue ambitious aims. At present, however, it is probably less threatening than Russia—or it is at least threatening in a way that requires a different type of American response.

Second, for a document released in early 2018, the lack of attention to possible regional adversaries in general, and North Korea in particular, is striking. To be sure, many of our immediate plans for enhancing deterrence and promoting combat readiness in and near Korea are necessarily classified. But the issue is hugely important. If war occurred on the Korean Peninsula, it would, as Secretary Mattis said last year, probably be far worse than anything the world has witnessed in recent decades.

The Korea contingency highlights slightly different issues and concerns than does competition with either Russia or China. The Department of Defense needs to devote considerable attention to issues ranging from being prepared for chemical-weapons attack, to handling large barrages of artillery, to defending against a wide range of ballistic missiles, to planning for a possible occupation and stabilization of North Korea, to thinking through how we would manage the risks of inadvertent conflict with China in such a scenario.

And finally, there is the question of money. With government-shutdown threats ongoing and no proper budget in sight, we literally still do not know if the 2018 national-defense budget will be closer to $700 billion than to $600 billion, even though the fiscal year is already nearly 1/3 over. Secretary Mattis was right to complain about that fact, a manifestation of poor governance in Washington. Over the last decade, as Mattis pointed out recently, there has only been one year in which a regular budget was passed on time. But this still begs the question of what the Department of Defense would do if its budget winds up much smaller than hoped, this year or in the future.

We do have one clue from the new strategy. The NDS, and Secretary Mattis himself in a January 19 question-and-answer session after his speech announcing the strategy, have placed more emphasis on developing new “capabilities” than on expanding “capacity.” In other words, the Department of Defense will emphasize innovation, modernization and acquisition more than it will prioritize the expansion of the size of the military.

This prioritization is correct—to a degree. The Trump administration to date, and the military services, have articulated ambitious goals for growing the armed forces: expanding the Navy to 355 ships, growing the Army to well over five hundred thousand active-duty troops, and other services commensurately. These expansions are perhaps not needed in full. More modest increases in the size of the force should be adequate, as the NDS seems to suggest, especially if we can find more innovative and efficient ways to manage the military and employ the forces.

However, if overall defense budgets prove smaller than planned, it would be a mistake to preserve innovation by actually cutting the force. In the event that belts must tighten at the Department of Defense, and even in the absence of such immediate austerity, the department needs to look for ways to economize in some of its modernization plans. Innovations like the B-21 bomber, new opportunities in artificial intelligence and robotics, new unmanned aerial vehicles and unmanned underwater vehicles, greater redundancy in space systems, and stronger hardening of electronics systems against cyber attack or nuclear attack should be fully funded. But the F-35 fighter program, the anticipated ICBM modernization program (at least at current scale and on the current schedule), and the Navy ambition to grow its fleet 25 percent in the next couple decades are among the current priorities that warrant a fresh look.

The NDS is very good. But it is not perfect, and of course it does not and could not settle all major defense issues before the country. How to apply its general ideas to specific problems will remain a major challenge in the months and years ahead.