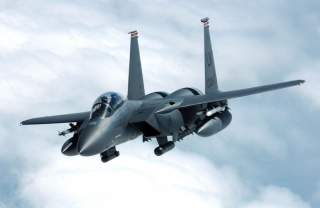 Led by Saudi Arabia, a coalition of Arab states began an intervention in Yemen’s complex civil war. The speed, scope and decisiveness of Saudi Arabia’s action continue to outstand the world, including the United States, which only had a “brief warning that Saudi airpower was about to be unleashed.” The Iranian-backed Houthi rebels, who follow the Zaidi school of Shia Islam, the target of Saudi Arabia’s intervention, have strong reason to fear Saudi Arabia, a country with the logistical capability to assemble a large battlefield coalition and a fearsome arsenal. Saudi Arabia has currently massed over 150,000 troops on its border with Yemen, giving rise to fears of a massive conflagration in the Middle East soon. Here are three Saudi weapons of war that should make the Houthis quake in fear.

On Wednesday and Thursday, Saudi officials said that they had deployed over a hundred fighter jets to drive back the Houthis. According to the Washington Post, “many of those are likely to be F-15SA fighter jets, a configuration of the American-made F-15E Strike Eagle, which the U.S. Air Force continues to fly regularly in airstrikes against Islamic State positions in Iraq and Syria.” The Saudis acquired these planes as the result of a $29.4 billion deal in 2010 when they purchased eighty-four new F-15SA fighters, among other planes. At the time, the Saudis also bought thousands of bombs to be loaded on the planes. The sale was the largest military sale in U.S. history.

Saudi planes have been pounding air bases, military bases and anti-aircraft positions in Sana’a, Yemen’s capital. They also hit a Houthi base in the southern Yemeni city of Taiz. The Saudi planes are clearly doing their job well, as the campaign—in the course of a couple of days—has given Saudi Arabia full control of Yemen’s airspace and eliminated several Houthi leaders.

Saudi Arabia also possesses H-64D Apache attack helicopters, thirty-six of which it bought from the United States in 2010 for use by the Royal Saudi Land Forces (RSLF). These could come in handy during a ground operation. According to some reports, Saudi attack helicopters have been used in Yemen before. In 2009, the Yemeni government launched “Operation Scorched Earth” against the Houthis. The Saudis soon got involved as well after the Houthis attacked Saudi territory.

The 57-foot long Apache has a four-blade main rotor, with a span of 48 feet, and a four-blade tail rotor and is “capable of carrying a variety of armament into combat for employment in day or night environments.” It contains a twin-engine and can seat a two-person crew. “The pilot occupies the rear station and a copilot/ gunner occupies the front station.” It is capable of cruising at a speed of around 100-120 knots, though it may go up to 164 knots. Its combat radius is about 150 kilometers.

Land forces have not yet entered Yemen, however. Yemen’s foreign minister, Riad Yassin, stated that a "short, sharp" campaign was needed to weaken the rebels, adding that while necessary, no one was happy with it. Nonetheless, a ground campaign is a distinct possibility, since Egypt said that it might send troops to Yemen to fight the Houthis with Saudi Arabia. In any ground operation, Saudi Arabia’s arsenal of helicopters would be able to devastate the Houthis. Saudi Arabia is armed with the best American weapons, while the Houthis are a loose guerilla force.

The United States sold several TOW missiles, developed by Raytheon to Saudi Arabia and the United Arab Emirates. In April 2014, Raytheon announced that Saudi Arabia signed a Foreign Military Sales (FMS) agreement with the U.S. Government for 14,000 TOW 2 missiles in a deal valued at approximately $750 million. The TOW 2A is an anti-tank and anti-armor weapon, “a direct-hit weapon designed to be a tank killer.” According to Ed Dunlap, the TOW’s business development manager for Raytheon Missile Systems, the TOW 2B is his company’s main “anti-tank, fly-over, shoot-down weapon.” Dunlap said: “the missile [TOW 2B] flies over the tank and based on its sensors, fires two warheads down onto the top of the tank, which is the softest part of any tank. The TOW 2B uses two warheads that are explosively-formed penetrators, where a molten slug comes out of the warhead and shoots down through the top of the tank.”

The TOW Bunker Buster is a direct-hit weapon, developed in order to “defeat structures, bunkers, and light vehicles.”

If Saudi Arabia chooses to deploy its TOW system in Yemen, it could wreak havoc on Houthis by denying them operational and logistical space. Houthi rebels would have difficulty retreating to fortified mountain strongholds in their highland bases and moving convoys. Much of the Houthis’ advance depended on their ability to move fast without resistance (there was minimal resistance in Sana’a when it fell).

But Saudi Arabia’s deadly arsenal of weapons could seriously degrade and destroy the Houthi movement, giving the Houthis much to fear.