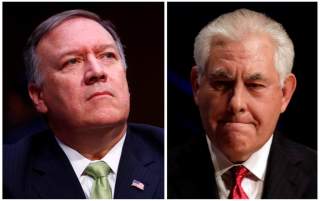 Secretary of State Rex Tillerson leaves office having served his country honorably during a tumultuous time in American politics and an increasingly dangerous situation globally. He is replaced by the highly capable, widely respected director of the CIA, Mike Pompeo. As the media weaves this story into existing narratives about President Trump’s leadership style, here are three things to keep in mind about what the change means for American foreign policy.

First, Tillerson was never that bad. Coming into office, there were concerns about his global connections. The oil and gas business has to go where the resources are, and that means working with sketchy and often violent regimes. His relationship with Russian energy companies—and Vladimir Putin, in particular—raised eyebrows, as did his potential ties to other countries like Iran and Syria. These concerns turned out to be unfounded. Tillerson’s long service on the board of the Center for Strategic and International Studies (CSIS) proved a more reliable indicator of his thinking on foreign policy than any personal business experience. It was at CSIS, in fact, where Tillerson first explained the administration’s trademark conception of the “free and open Indo-Pacific.” It was a masterful performance that demonstrated he had done his homework.

As for Russia, ironically enough, the media now report that his view of Russia—more conventional and critical than Trump’s—was one of the reasons he was let go.

Concern that Tillerson might break with convention peaked early during his fourteen-month tenure at State. He skipped the roll out of State Department’s annual human-rights report, and he gave a speech to staff saying that the U.S. approach to human-rights advocacy had to be pursued on a case-by-case basis. The rhetoric was new, but the policy wasn’t. The United States has often turned a blind eye to abuses committed by friendly dictatorships, even as it isolates others. It has sometimes done so in error. Other times, it has rightly given greater priority to broader strategic interests or, as in the case of the Cold War, to greater moral cause. Tillerson was roundly criticized for recognizing this reality.

And whereas his pass on release of the human-rights report received a great deal of attention, his presence at the rollouts of the religious freedom and trafficking reports went virtually unnoticed.

By the fall, in the aftermath of the Burmese army’s effort to cleanse Rakhine State of its Rohingya minority population, Tillerson became one of the administration’s leading voices speaking out against the atrocity.

Second, Tillerson was never that great. He did a fair job representing the United States with foreign officials, especially as he matured in office. But observers will remember well his first visit to China, during which he parroted Chinese catch phrases like “win-win” and “mutual respect” to describe U.S.-China relations. The problem with this is that the Chinese use those terms to mean very specific things—support for its “core” interests, for instance, which includes its claim to Taiwan. The significance of these implications seemed lost on the Secretary of State.

His public differences with the president on a range of issues—from the Paris Climate Change Accords to the Iran Nuclear Deal to the North Korean nuclear threat—consistently put his credibility at stake. Now, this is not all his fault. The president’s own views are sometimes difficult to track. On North Korea, some in the administration even maintained that the conflicting statements were purposeful strategy. If so, it was a bad one. Consistency in messaging is an important part of statecraft, and if Trump’s closer relationship with Tillerson’s successor facilitates that, it will be for the good.

The very idea that Tillerson’s long career at ExxonMobil prepared him to be Secretary of State of the most powerful country in the world was always suspect. These suspicions were occasionally inflamed by reports of his laser-like focus on reorganization of the State Department and relatively isolated, deliberative leadership style. Reorganization and budget cuts at State are called for, and will continue, under Pompeo. But the Secretary of State has a day job, too. The world moves fast and requires strategic thinking that best utilizes the expertise of Department resources.

Third, Mike Pompeo has the makings of a very good Secretary of State. Pompeo brings to office a familiarity with Washington. After three terms in the House, he understands the role of Congress role in foreign policy. Lawmakers will continue to play a role on all the most urgent issues—Russia, Iran and North Korea. Indeed, they are getting more passionate on foreign policy value-related issues, like Burma. On some issues, like Taiwan, Congress often takes a lead role. Pompeo’s experience will also help him understand where Congress is on trade issues. Reportedly, ongoing trade negotiations were among the priorities Trump had in making the change to Pompeo. Surely, the president knows that in Congress, Pompeo’s support for free trade was 100 percent. He voted for agreements with Korea, Panama and Colombia. He voted to give the President Trade Promotion Authority in 2015.

Pompeo’s experience at the CIA, of course, gives him an immediate familiarity with the most critical issues facing the country. Making a big change to the diplomatic team just as the United States may be approaching talks with North Korea may seem risky, but Pompeo should be deeply familiar with the brief. Moreover, as an outgrowth of his regular intelligence briefings of the president, the two appear to have developed a strong meeting of the minds—something that the President himself has proclaimed.

The bottom line on the change from Tillerson to Pompeo is that, while the messaging may change, and management and priorities may change, America’s national interests will not. The way the United States goes about securing them—U.S. foreign policy—will. There is enough in Pompeo’s record that the nation can afford to hope that he will build on Tillerson’s foreign-policy successes and correct for his errors.