3 Ways an Asian War Could Erupt 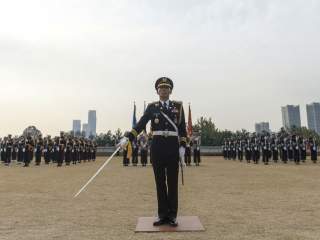 At times of global instability, the places where things remain calm stand out. That is the case with northeast Asia, the area primarily comprised of China, Japan, parts of Russia and the two Koreas. Due to the generosity of the Korean Economic Institute and Korea Foundation, I had the chance recently to travel to Seoul to partake in multiple meetings with government officials, journalists and other experts to learn about what is happening in the region.

South Korea finds itself in an interesting position. It relishes its role as a staunch U.S. ally, yet it also feels compelled to play a dual game of being nice to both Beijing and Washington. It was stressed during my visit that any attention Park Geun-hye’s government pays to China should not be viewed as America “losing” South Korea.

Most revealing, though, was hearing about the knife’s edge on which northeast Asia rests today. Indeed, in talks with prominent thinkers and practitioners, the issue that came up more than once was that the relatively stable regional situation could change—and change quickly—if a few scenarios go the wrong way. Part of the U.S. strategy for the rebalance should be first to understand these flashpoints and then to prevent any rising tensions in northeast Asia from leading to war.

So, what might cause Asia to fall off the knife’s edge?

Chinese-Japanese relations. Beijing and Tokyo will not become friends anytime soon. That has to do with history, but it also has to do with today’s environment. Japan has significantly altered its post–World War II pacifist stance, allowing Japanese military forces to partake in “collective self-defense” and join the United States and other allies and partners in regional security maintenance. China, on the other hand, continues to exert its authority—which it claims it always had—over most of East Asia. Chinese, Japanese and American interests differ on what is suitable for a regional security order in Asia. Mismanagement in trying to align these views and interests could lead to a skirmish, which should be avoided at all costs. The Chinese-Japanese relationship, then, ranks alongside the Chinese-American relationship among the most important for global stability.

The South China Sea. Perhaps the most famous of the potential flashpoints in Asia, the South China Sea could certainly bring instability to the area. Competing claims over islands and other territory in the waters—including newly created islands—have led to greater shows of military force and strong statements from many regional leaders. The United States sees itself as a Pacific power and a security guarantor in the region; therefore, Washington believes it can find a way to make China back off and make many happy. Of course, China has a second-strike capability (not to mention third- and fourth-strike, etc.), so overreaching uses of the military could lead to a “dangerous contest of military might.” In the meantime, proxy competition for and among regional states could be expected—some is already taking place. Ensuring this does not get out of hand now and in the future will keep the lid on this potential Pandora’s Box.

North Korea. While North Korea’s antics get a lot of press, the real issue is what the country’s future holds. Will Kim Jong-un consolidate his power, ensuring his regime’s success for decades to come? Will North Korea build and acquire the technology it craves for self-defense and aggression? Will it, over time, choose to reunite with South Korea? Or will the regime collapse, causing a large-scale crisis? It’s this last scenario that scares most northeast Asia watchers, and certainly South Korean leaders. China, they assert, would get much more involved on the peninsula should North Korea crumble, aiming to impose its will not only on the likely gangster-led fiefdoms in the north but also keeping South Korea and the United States out. A Syria-like war could break out in Korea, possibly pitting China and the United States against each other. South Korea is doing all it can to ensure a collapse situation does not happen, but only the North is truly in charge of its own fate.

What, then, can the United States do to keep northeast Asia from the brink? First, it can follow South Korea’s model of trustpolitik to build confidence among regional actors. The more China, Japan, South Korea and others engage and understand one another, the less likely that a flare-up will lead to a greater crisis. Second, the United States should do all it can to bring China into the global order. Giving China more weight in international institutions, so that it does not create something like the Asian Infrastructure Investment Bank again, is vital. Making China feel welcome as a top global power will lower the chances of it misbehaving.

Third, the United States must work closely with Japan to ensure it uses its newfound military power wisely and correctly. Bringing American and Japanese troops closer together would be smart, as the United States could counsel Japan on the proper ways of deploying troops in this new environment. Fourth, Washington should plan for a more modern version of extended deterrence in the region. Finally, the United States should reaffirm its commitment to regional allies. Certain South Korean leaders felt the United States was absent in terms of its action in the region—this, coming from a country where the U.S. military directly works with South Korean military forces and has a large installation in the middle of its capital city! Many South Korean leaders see America’s “strategic patience” as doing nothing. That perception must be changed, also in Japan, and even further south in the Philippines, Vietnam, Thailand and Australia.

Northeast Asia remains secure, and the hope is that it stays that way. Sadly, hope alone is not enough to sustain the region's security. As America rebalances to Asia, even in the next administration, maintaining the stability that northeast Asia delicately holds now should be one Washington's primary strategy objectives.

Image: Flickr/Chairman of the Joint Chiefs of Staff.