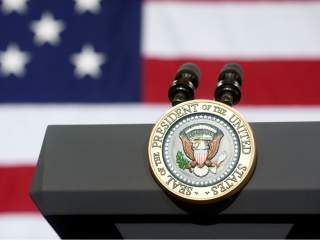 It is difficult to think of another election season in modern history in which so many traditional tenets of U.S. foreign policy were being questioned. This is understandable at some level. The United States has fallen far short of its aspirations in its foreign policy, and it seems that conflicts and threats, rather than opportunities, are dominating our relations with virtually every region of the world.

Recent statements, however, not only by our presidential candidates but also by President Obama, suggest that our national debate is drifting in a concerning direction. The following points are becoming all too common in the national discourse, and must be considered with appropriate perspective as we decide on a sound new U.S. strategy.

1. We should disengage from the Middle East.

The bluntest articulation of this view has come from President Obama and his closest aides. The Arab Spring, according to CIA Director John Brennan, convinced the president that “the Middle East was consuming us.” President Obama concluded that only a few threats—Al Qaeda, Israel’s existence and a nuclear Iran—justify direct military intervention. Otherwise, he stated, “There is no way we should commit to governing the Middle East and North Africa...That would be a basic, fundamental mistake.” Overextension in the region, President Obama fears, could “ultimately harm our economy, harm our ability to look for other opportunities and to deal with other challenges, and, most important, endanger the lives of American service members for reasons that are not in the direct American national-security interest.”

The problem with the president’s critique—shared to varying extent by the presidential candidates—is that it fails to consider the even greater problems that would arise amid a U.S. retreat. The United States protects access to the Persian Gulf, holding the line against a regional conflagration that would instigate an oil price shock. The ill-considered disengagement from Iraq in 2010, the resulting rise of ISIS and the conflict in Syria offer a taste of what would happen amid a further U.S. withdrawal. Already, regional powers were doubling down behind their proxies in the Iraqi and Syria civil wars, but the assertion of Russian power has made these wars even more dangerous. Moscow has returned as a significant player in the geopolitics of the region—a factor that, until now, had been absent since the Cold War. Other great powers, particularly China and the Europeans, are also becoming more involved in the Middle East, which points to the beginning of a chaotic multipolar trend as a consequence of American retrenchment.

Confidence in the United States to manage regional security has already declined. Some states are hedging by building relations with U.S. rivals, including China and Russia. However, it is difficult to see how the United States could avoid defending a critical set of interests beyond what the President has outlined. If sectarian war were to spread to the Shia areas of eastern Saudi Arabia, where ten million barrels of oil are produced every day, could we remain uninvolved? Facing the prospect of a major recession at home from disruptions in global energy markets and a further tilt toward Iran in the geopolitical balance, Washington would be compelled to undertake a large-scale U.S. intervention in defense of Saudi Arabia on the order of Desert Shield and Desert Storm.

We are better off remaining engaged in the Middle East, and shaping events positively, rather than allowing major crises to arise, which would compel us to intervene in much more difficult and costly circumstances.

2. We should strike terrorists kinetically, but avoid getting involved in nation building.

As Sen. Ted Cruz put it, “It is not the job of the U.S. military to engage in nation building to turn foreign countries into democratic utopias.” Donald Trump has also argued against nation and state building abroad.

In fact, the rationale for U.S. involvement in nation and state building has always has been more hard-headed and nuanced than creating “democratic utopias.” Consider the history of why the United States decided to pursue nation building in Afghanistan in the first place.

As a White House official in 2002, I shared the view, espoused by President Bush and his principal advisers, that the United States should maintain a light military footprint in Afghanistan. After spending many months in Afghanistan as a presidential envoy, however, I realized that it would be impossible to prevent the reemergence of terrorist safe havens without rebuilding the country’s institutions.

I, among other skeptics, came to embrace state building, not out of airy idealism, but rather because there was no other way to secure our core counterterrorism interests at a cheaper cost. We concluded that the long-term solution to achieving even basic counterterrorism objectives was to enable Afghans to defend and police their own territory, thereby preventing the infiltration of terrorist groups from Pakistan and the regrowth of such groups from within. Otherwise, Americans, rather than Afghan troops and police, would have to stand watch unless we were prepared to allow Afghanistan to become a terrorist sanctuary again.

A bipartisan majority in Congress—hardly eager to spend taxpayer dollars on Afghanistan—agreed with this analysis. In 2004, Congress funded a $1.6 billion increase in Afghanistan reconstruction programs to build stronger Afghan institutions, knowing that it would create a virtuous cycle that redounded to the benefit of U.S. counterterrorism interests.

While a bipartisan consensus has endured in supporting Afghanistan’s reconstruction efforts, the Obama years have seen a greater emphasis on Special Forces, drone strikes and kinetic operations. The persistence of the terrorism threat and the broader disorder in the Middle East have exposed the limits of these instruments. The United States needs to put much greater emphasis on mobilizing indigenous forces who themselves oppose extremism and terrorism, and who can foster and sustain a positive, alternative vision for the region’s peoples.

Shallow criticisms of state building ultimately distract from the more serious question that needs to be asked: Why is the U.S. government so poorly equipped to handle post-conflict planning and implementation? Growing disorder in the world will compel the United States, whether we like it or not, to engage in state and nation building in difficult settings. The real question is how we can develop stronger capabilities and mechanisms to succeed in these operations.

In my book The Envoy: From Kabul to the White House, My Journey Through a Turbulent World, I propose a number of reforms in both the State Department and USAID to increase our effectiveness in state- and nation-building missions. Establishing a new expeditionary “cone” at the State Department, for example, supported by a civilian reserve of specialists, is one of many cost-effective steps we could take. Doing so would undercut the temptation later on to turn to the military when there is a need to engage in state and nation building.

3. The United States does not need to contain major powers like Russia, China, and Iran, and instead, can rely on our friends to keep them within confined spheres of influence.

A “sphere of influence” approach to managing major powers is making a comeback. President Obama wants Saudi Arabia and Iran to “share” influence in the Middle East, and dismisses the “idea that talking tough or engaging in some military action” in areas “tangential” to U.S. interests are going to “influence the decision making of Russia or China.” The president concedes the “fact” that Ukraine, as a non-NATO country, “is going to be vulnerable to military domination by Russia no matter what we do.” Secretary of Defense Ash Carter has gone further, declaring that the unipolar world is over and that we now live in a multipolar world. Donald Trump, too, in his skepticism of NATO and other long-standing U.S. alliances, has endorsed a de facto sphere of influence strategy for Europe and Asia.

As a Pentagon planner in 1992, my colleagues and I considered seriously the idea of conceding to great powers like Russia and China their own spheres of influence, which would potentially allow the United States to collect a bigger “peace dividend” and spend it on domestic priorities.

Ultimately, however, we concluded that the United States has a strong interest in precluding the emergence of another bipolar world—as in the Cold War—or a world of many great powers, as existed before the two world wars. Multipolarity led to two world wars and bipolarity resulted in a protracted worldwide struggle with the risk of nuclear annihilation. To avoid a return such circumstances, Secretary of Defense Dick Cheney ultimately agreed that our objective must be to prevent a hostile power to dominate a “critical region,” which would give it the resources, industrial capabilities and population to pose a global challenge. This insight has guided U.S. defense policy throughout the post–Cold War era.

Giving major powers the green light to establish spheres of influence would produce a multipolar world and risk the return of war between the major powers. Without a stabilizing U.S. presence in the Persian Gulf and U.S. relationships with Jordan and the Gulf States, Iran could shut down oil shipments in its supposed sphere of influence. A similar scenario in fact played out during the 1987 “tanker war” of the Iran-Iraq war, which eventually escalated into a direct military conflict between the United States and Iran. Iran’s nuclear program makes these scenarios even more dangerous.