4 U.S. Weapons of War That Need to Be Retired Now 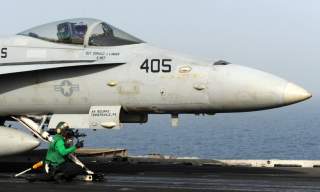 The United States boasts some of the most modern weapons on Earth, but there are also many systems in the American arsenal that are well past their prime.

While some older weapons are worth their weight in gold—the long-serving Boeing B-52 and Fairchild Republic A-10 Warthog come to mind—and continue to prove their worth time and again, there are other systems that have proven to be less than stellar. Other systems have proven to be valuable in the past, but may no longer be needed or affordable in an era when money is tight.

Listed here are four weapons systems that America should consign to the scrap heap.

The long-serving 1960s-era LGM-30G Minuteman III forms the land-based component of America’s strategic nuclear deterrence. The Minuteman III is the last American land-based intercontinental ballistic missile to remain in service—the newer, and much more capable LGM-118 Peacekeeper having long since been retired. Even after the 1991 demise of the Soviet Union and the end of the Cold War, these long-range Minuteman III ICBMs missiles have kept up a silent vigil for the event of a third world war.

Though the missiles have been upgraded many times, the weapons are old and increasingly costly to maintain. Nor has the U.S. Air Force, which is charged with maintaining the doomsday arsenal, been a particularly good steward of these systems. Bad behavior has been rampant—many officers have been caught cheating on exams and abusing subordinates. Morale has all but collapsed.

Meanwhile, the weapons will need to be replaced at some point—and that will cost billions. But does America really need a nuclear triad? Is the small chance of a nuclear war worth spending untold billions to maintain a land-based ICBM force? That is a question policy makers must answer before making such a huge investment of taxpayer dollars. It is almost universally accepted that the U.S. Navy’s submarine-launched ballistic missiles are infinitely more survivable—and one might argue that adopting a strictly sea-based deterrent might be a far better deal for the American taxpayer.

The original Boeing F/A-18 Hornet was an excellent fighter and attack aircraft to replace the U.S. Navy’s LTV A-7 Corsair II and McDonnell Douglas F-4 Phantom II and to complement the Grumman F-14 Tomcat. While the so-called “legacy” Hornet remains an excellent fighter that continues to serve the Navy well, the aircraft are old. In fact, the Navy has been forced to repeatedly extend the service life of the Hornet from the originally envisioned 6000 hours to more than 10,000 hours in some cases.

Extending the service life of the Hornet is proving to be costly and difficult. Much more difficult than the Navy or Boeing ever imagined. Add to that the fact that there is a shortage of technicians who can perform the work, which means there is a massive backlog of Hornets that are in need of repair.

Moreover, those life-extended  aircraft—which are ancient by fighter jet standards—are increasingly difficult and costly to maintain. It could be argued it’s just not worth the time or money.

Instead, the Navy—and moreover, Congress—should consider funding the purchase of additional F/A-18E/F Super Hornet fighters, which are the larger and much more capable versions of the venerable carrier-based jet, to replace the old legacy Hornet fleet.

The Raytheon AIM-120 AMRAAM was the world’s most advanced air-to-air missile when it was originally introduced in the early 1990s at the end of the Cold War. Compared to its AIM-7 Sparrow predecessor, the AIM-120 was a massive improvement with its combination of inertial guidance and active radar homing. However, as time has gone by, potential enemies have learned how to defeat the  AMRAAM.

The missile is very vulnerable to digital radio frequency memory (DRFM) jammers—which are found on the most advanced Russian and Chinese fighters like the Sukhoi Su-35S Flanker-E. American pilots say they expect they will have to fire several missiles to hit a single target. “Even with my six AIM-120's in the F-22, sometimes it is not enough,” one senior Air Force pilot told the National Interest. “The Pk [probability of kill] of those missiles is low against a DRFM jamming fourth gen+ threat.”

The AMRAAM must be replaced sooner rather than later—it’s great to have the world’s best fighters, but it’s a huge problem if their weapons can’t hit the broadside of a barn.

The U.S. Army has known that the long-serving M-16 and its M-4 progeny are terrible weapons since the Vietnam era. However, the Army continues to insist on keeping the M-16 and its derivatives in service.

The fundamental problem with the M-16 series is its direct gas impingement design—that design is prone to fouling, because the firing mechanisms are exposed to the exhaust from the cartridge when the weapon is fired. That means the weapon must be kept meticulously clean at all times—something that is not always possible in combat.

There is no solution to the problem short of replacing the M-16 series with a new weapon—ideally with a gas-piston design—like the Heckler & Koch HK416. The M-16 series has let the troops down repeatedly over its long career, but the Army will not replace it because of the cost. Not only are weapons like HK416 more expensive individually, the logistical train would have to be completely revamped. That costs money—money the Army would rather spend on other priorities.