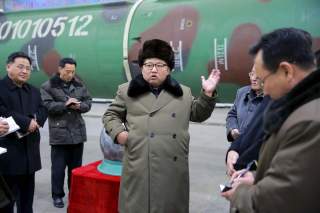 Kim Jong-un has been at it again: another intercontinental ballistic missile test and a further verbal threat against the United States. Yet, despite all of North Korea’s technical developments and rhetorical bluster, the United States and its allies are almost certainly safe from a deliberate nuclear strike. Kim Jong-un is a rational actor driven by one all-consuming goal: survival. To intentionally attack the United States or its allies with nuclear missiles would almost certainly result in nuclear retaliation or a regime-change driven invasion. As Robert Kelly noted in the National Interest, “Pyongyang knows there is no way to use their weapons for gain that would not immediately provoke massive counter-costs.”

This does not mean, however, that the world is entirely safe from a North Korean nuclear attack. There are at least four scenarios that could lead to the pariah state’s nuclear weapons being used: foreign invasion, domestic uprising, nuclear accidents, or acquisition by terrorists.

The high-costs versus low-reward calculus that currently holds Kim Jong-un back from using his nuclear weapons could change if the Trump administration responded to North Korea’s ongoing missile provocations, nuclear threats and abhorrent human-rights record with a major military intervention. In that situation, Kim could feel sufficiently certain that his regime was destined for collapse and his own life forfeit that he decides to use nuclear weapons. These might be deployed against the invaders as a weapon of last resort—hoping to destroy either their material means or political will—or as a final act of vengeance against their homelands.

It is difficult to gauge whether Kim would act in this way because in the two most recent interventions—America’s overthrow of Saddam Hussein in Iraq and NATO’s push to depose Muammar Gaddafi in Libya—the regimes in question had abandoned their Weapons of Mass Destruction some years earlier. Would either dictator have used nuclear weapons as a last-ditch survival attempt or as revenge for their imminent demise had they possessed them? We will never know.

To gain a better understanding, we must reach back in time to the end of World War II, when Adolf Hitler ordered vast swathes of Nazi occupied territory to be destroyed (albeit using conventional methods) once it became clear that his forces were all but defeated. He issued two famous orders: that Paris be turned “into a pile of Rubble” and Warsaw be “levelled to the ground.” Hitler thought that this would impede allied progress as a scorched-earth strategy and help to stamp out all partisan resistance against the German occupiers. He also wanted to deprive the world of these two cities on the basis that if Germany could not have the cities, no one else should have them. At the same time, Hitler felt able to disregard the risk of retaliation from the allies in response to these atrocities because they were already engaged in a total war with the Nazi regime.

In Paris, the unthinkable never happened because the general assigned to carry out the command—Dietrich von Choltitz—was not a member of the Nazi party and had come to believe that Hitler was sufficiently insane that this order should be ignored (although von Choltitz was scarcely a saint—he had previously destroyed other population hubs). Tragically, in Warsaw, the task was assigned to the ideologically fervent and high-ranking SS Officer, Erich von dem Bach-Zelewski, who executed his task with horrifying brutality and razed Warsaw to the ground, killing 150,000–180,000 people. Unfortunately, the political indoctrination and subordination of the armed forces to the regime in North Korea means that the commanders to whom Kim Jong-un would issue his nuclear attack orders would be more likely to be party loyalists like Bach-Zelewski than more independent thinkers like von Choltitz.

The rationality calculus facing Kim Jong-un could also change as a result of domestic rebellion within North Korea. The extreme security measures employed by the regime makes an uprising extremely improbable, but in the unlikely event that one did erupt and it was winning, Kim Jong-un might find himself staring over the abyss. He could then decide that threat was sufficiently pressing that nuclear weapons should be used, either against the rebels themselves or any outside allies who were supplying aid and support.

Although no state has ever used nuclear weapons to suppress internal dissent, other weapons of mass destruction have been employed for this purpose. Saddam Hussein, for example, used chemical weapons against his own people when facing significant threats against his rule in 1988 and again in 1991. More recently, in the ongoing Syrian Civil War, Bashar al-Assad has deployed chemical weapons in rebel held areas on numerous occasions. The notion that the even more fanatical regime of Kim Jong-un might be willing to use nuclear weapons against his own population or outside supporters of a rebellion, if his regime appeared to be similarly tottering on the brink of collapse, is not at all far-fetched.

Alternatively, North Korea might launch or detonate a nuclear weapon unintentionally. The comparatively short lifespan of the country’s nuclear program, along with its relative isolation from the expertise of other nuclear powers, means that its nuclear safety measures are likely to be dangerously under developed. This increases the chance that a nuclear missile could be fired or a warhead detonated involuntarily as a result of a hardware failure or software errors. To make matters worse, the regime seems to be in a colossal hurry to increase the size of its stockpiles of nuclear weapons and ballistic missiles. This is a problem because when states place a premium upon expanding their nuclear arsenals at all costs, it may come at the cost of making parallel advances in nuclear and missile safety. Unless North Korea slows down the current pace of its weapons-enlargement efforts to ensure that it is developing equivalent safety systems, the warheads and missiles that it produces could be accidents just waiting to happen.

Another challenge is the potential for North Korea’s early warning systems to misread the presence of harmless artifacts in its airspace as being an inbound nuclear missile and reacting with a nuclear response. Even the most developed and experienced of nuclear powers have faced this challenge and only survived due to the good judgement, immense courage, and risk-taking of key individuals. One example happened in 1983, when Soviet Lt. Col. Stanislav Yevgrafovich Petrov identified what appeared to be five inbound intercontinental ballistic missiles hurtling towards the Soviet Union. Under intense pressure, Petrov decided that the reading must be incorrect because if the United States was really attacking, he would expect to see hundreds of missiles rather than just five. He was proved right, but the strain proved immense, leading him to later retire from the armed forces and suffer a nervous breakdown. Had a less critically minded or a more ideologically zealous person been in charge, they might have told their superiors that a nuclear attack was imminent and advised retaliation. In North Korea, the totalitarian nature of the regime increases the probability that the people staffing the early warning systems will interpret what they see on their screens literally—and without Petrov’s critical eye. This could lead North Korea to fire nuclear missiles against a purely imagined attack. This risk is heightened by the paranoia of the regime about the outside world, which has led its nuclear weapons to be placed permanently on high alert and which further piles on the pressure for everyone involved. This makes an accidental nuclear weapon launch even more likely.

Finally, North Korean nuclear weapons could be obtained by one or more terrorist groups. The Kim Jong-un regime is already a major black-market seller of conventional weapons, missile materials and nuclear technology, and it would not be a huge leap for it to begin peddling fully functional nuclear bombs to the highest bidder as well, which could potentially include terrorist groups. This could happen if North Korean endured a fresh bout of unexpected economic turmoil or agricultural distress and the regime opted to sell its way out of the problem. Alternatively, the weapons could end up in the hands of terrorists by being stolen and smuggled out of the country. The risk of this happening was highlighted in the Nuclear Threat Initiative’s 2016 Nuclear Security Index Report, which gave North Korea a dismal score of just thrity-eight out of one hundred for the security it provides against potential theft of its nuclear weapons when they are being used, stored or transported. An American military strike to disable North Korea’s nuclear facilities could actually backfire because it might damage the existing security infrastructure around one or more of North Korea’s nuclear storage facilities, which could make them easier to steal until they are repaired.

The acquisition of North Korean nuclear weapons by a terrorist group would be alarming because rationality in these groups is often lower and more complex than with state actors, allowing them to act with fewer constraints. One historical example of an at least partially irrational terrorist group was Aum Shinrikyo, whose leaders and followers genuinely believed that Armageddon was coming and that they needed to strike against their enemies with weapons of mass destruction to achieve salvation. The cult’s members did not fear nuclear retaliation because they believed that the end of the world was imminent anyway. They used biological and chemical weapons, but had been eager to acquire nuclear weapons and would likely have employed these as well if they could. Moreover, it is notoriously difficult to deter even rationally acting terrorists because they often operate in highly diffuse networks that are hard to track and difficult to destroy, they are usually highly mobile, and typically do not have a fixed territory in the same way that state governments do. Ultimately, if a terrorist group was to successfully obtain a nuclear weapon from North Korea, it is not at all improbable that they might use it.