4 Ways out of the Korean Crisis 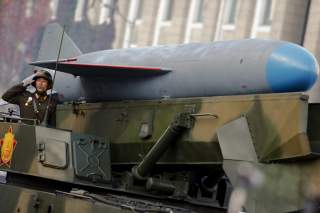 Ken Burns’ exceptional documentary on the Vietnam War reminds us once again that the conduct of U.S. strategy in the Asia-Pacific region has been less than flawless. The millions of victims of that needless conflict, including fifty-eight thousand American servicemen who made the ultimate sacrifice, should never be forgotten. As Ambassador Don Gregg recently wrote in a letter to the New York Times, the Burns documentary and the lessons of Vietnam have much to teach about avoiding “misguided decisions,” in the current Korean nuclear crisis. U.S. misunderstandings and misdeeds in Asia did not begin with Vietnam, however. Even as we always remember the unalloyed triumph of the Pacific War over Japanese militarism first and foremost, one need only reflect on the bloody Philippines intervention from the late nineteenth century or peruse the magisterial work Sand Pebbles by Richard McKenna to learn about U.S. military operations in China during the early twentieth century, in order to glimpse the rather ambiguous foundations of U.S. hegemony in the region.

During the mid-1960s, the main concern for American strategists was, as it remains today, the misbegotten project of hemming in Chinese power. That project, crystallized in the 2011 announcement of the “rebalance,” badly soured U.S.-China relations, making it that much harder to reach practical consensus on key issues of bilateral concern, notably with respect to Korea. It is worth asking how much more progress could have been made on the Korean issue if U.S. and Chinese diplomats had not spent the last decade locked in verbal combat over the fate of various, rather meaningless “reefs and rocks.”

Yet, the main responsibility for today’s awful predicament on the Korean Peninsula must fall squarely on the George W. Bush administration that recklessly linked North Korea to the 9/11 attacks and sent Kim Jong-un’s father on a headlong rush for the bomb that culminated four years later in Pyongyang’s initial nuclear test. In an ironic and dangerously perverse twist of fate, some of the same incautious thinkers that dreamed up and pressed the “Axis of Evil” doctrine in the first place are now in positions of influence regarding the present crisis. The press was all too busy unraveling the fiasco of the Iraq War to ascertain its second order effects in Northeast Asia, much less to call to account those responsible. Is it any wonder that President Donald Trump’s speech before the UN in September had an eerie similarity in tone to Bush’s infamous 2002 speech? By now, Americans are quite sick and tired of neoconservative bromides that make for ringing rhetoric, but have had disastrous policy outcomes. However, to put disasters into true perspective, a new Korean War would quite obviously make the Iraq War look like a garden picnic.

Instead, Americans now seek practical solutions—call it the “Art of the Deal” if we must—that should empower creative diplomats rather than just military planners. Of course, the U.S. armed forces have a key role to play in assuring deterrence and also applying some reasonable pressure, serving as the “iron fist within the velvet glove.” Deterrence has worked and will continue to work: a small demonstration of the power of the U.S. military deterrent, for example, was the picture of a U.S. Navy nuclear-attack submarine pulling in for a stop at Busan, South Korea, that graced the cover page of China’s newspaper Global Times (环球时报) on April 26, 2017. However, the tendency everywhere visible for Americans to simply hope that the U.S. military could somehow make North Korea suddenly disappear is completely far-fetched and downright dangerous in so far as it feeds the bunker mentality in Pyongyang and leads Kim Jong-un to press his missile brigades to adopt hair-trigger practices as part of the well-known “use’m or lose’m” problem in nuclear strategy. With the recommendation that American strategists begin to discuss diplomatic solutions in earnest (and the hope this is well underway behind the scenes), this Dragon Eye will focus on four diplomatic initiatives that could help move this situation back from the edge of apocalyptic war.

Before elaborating these proposals, however, it will be essential to dismiss two unfortunate myths. The first is that any negotiations with North Korea are bound to fail. That conclusion is primarily derived from the experience of the 1994 Agreed Framework, and recent analyses of that episode show more than a little blame also belongs with the U.S. side regarding haphazard implementation. That critical agreement may well have been killed for ideological reasons, as one expert rendering reveals. A second extremely widespread myth concerns the supposed viability of new and enhanced sanctions to halt North Korea’s nuclear weapons program. The logic is flawed on many levels, not least that North Korea is a very different country than Iran. But the core problem is actually that nobody knows how to “collapse” a regime possessing nuclear weapons. Perhaps Pyongyang suddenly caves and becomes malleable. Alternatively, perhaps the Kim regime calculates the end is near and so places all bets on the desperate, irrational gamble of (nuclear) war. In short, the sanctions logic of ever intensifying pressure puts far too much stock in the rational mind while ignoring the fact that irrational and passionate impulses are everywhere evident in human behavior—to the point that such impulses may be called “normal.” With a healthy respect for a rational and reasonable negotiated solution to the current crisis, the discussion below outlines four possible structures for a negotiated settlement.

Chinese diplomats have been active in promoting diplomatic solutions to the increasingly tense standoff on the Korean Peninsula. Foreign Minister Wang Yi outlined a double suspension (双暂停) in March 2017 under which Pyongyang would freeze both nuclear and missile tests in exchange for a suspension of the large, annual U.S.-ROK military exercise. Regrettably, the proposal has not received adequate discussion, analysis or debate by experts in U.S. media. The more comprehensive and similarly sounding “dual track” (双轨制) proposal was fully discussed in a 2016 academic article that was published in the journal Northeast Asia Forum (东北亚论坛) by Wang Sheng and Ling Shengli. The essence of the proposal seems to be a joining of the denuclearization goal together with a second track that rests on a “cessation of hostilities—peace treaty mechanism” (停和机制). They suggest that this peace process would need to be realized gradually, encompassing four phases. In the first phase, Pyongyang’s agreement to freeze its program would require some “sort of ‘compensation’” (定的补偿). During a second phase encompassing year three to year five, the United States and ROK could reduce or halt their exercises, as North Korea agreed to inspections and denuclearization, while opening up its economy. A third phase from year five to year eight would witness enhanced security through making denuclearization irreversible, establishing conditions in which North Korea “could become a normal member of the world community” (成为国际社会的正常一员). In the final phase, year eight to year thirteen, a permanent peace treaty could be signed and, now that North Korea had increased trust with its neighbors, Pyongyang’s national interests could be served by a reemphasis on economic goals versus military goals (国家利益的重心由军事向经济的大转移).

The above proposal has some definite strengths in that it remains firm on the goal of denuclearization and yet seeks to take the security and economic interests of Pyongyang seriously. Moreover, these Chinese analysts agree that “sanctions are a necessary tool” (制裁是必要手段). But there is a general lack of specificity and one can perhaps detect hints of a frustrated “big brother” attitude, for example, in the call for Pyongyang to demilitarize and seek greater “opening to the outside world” (对外开放). Such goals are laudable, to be sure, but it is not realistic for the agreement to attempt serious reforms of North Korea’s governing practices. I outlined a practical way forward in my book: a “cooperation spiral” that puts a premium not on internal reforms, but rather on conferring concrete strategic (or alternatively prestige) benefits to all parties. The spiral evolves from smaller, more symbolic steps to larger compromises. To make a start, the United States could propose that Chinese and U.S. military staffs walk some of the battlefields of the Korean War together. Another rather simple initiative could involve China, the United States, South Korea and, yes, also North Korea in relatively simple multilateral patrols in the Yellow Sea to monitor fisheries or practice search-and-rescue operations. The next steps in the spiral would involve a symbolic withdrawal of U.S. troops in exchange for Beijing and Pyongyang agreeing to invigorate the now rather moribund 1961 defense treaty, enabling the symbolic reentry of Chinese troops back into North Korea. Once that balance has been established, a further step could initiate direct talks between the United States and North Korea, while China would oversee a freeze in North Korea’s nuclear arsenal. That freeze would secure the establishment of diplomatic relations between the United States and North Korea and after some institutionalization of China-ROK military ties to reassure Seoul, the biggest leap could complete the spiral. In that final “grand bargain,” Washington would offer a very significant (but not total) withdrawal of forces from the Korean Peninsula in return for a complete and verified denuclearization process (with proliferation safeguards) overseen by China.