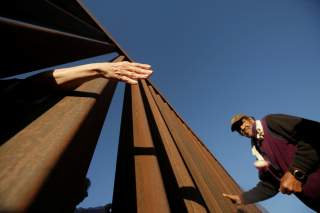 Few issues vex Washington lawmakers more than border security and immigration, so don’t blame President Donald Trump. The debate over how to fix America’s broken borders and flawed immigration system raged for two decades before he got the key to the Oval Office. Trump just threw napalm on a forest fire.

This all can be fixed. Despite the fact that he is the center of the storm, Trump may be the best one to fix it—but only if he adopts a comprehensive agenda that focuses on addressing the problems rather than just making a deal. A real agenda would include effective border security and regional engagement, enforcing immigration laws, assimilation, and legal immigration reform.

Real reform would start with being clear about the biggest bugbear in the debate: what to do about those already unlawfully present in the United States. The answer should be simply this: people who are in the country illegally don’t have a right to stay.

The debate over border security and immigration has become toxic because politicians have made it all about their politics. The squabble has become a partisan morass, with reasonable Americans trapped between zealots on both sides in an alley to nowhere.

Compromise is no way to cut through intractable divides such as this. Reagan tried that. The Immigration Reform and Control Act of 1986, otherwise known as the Simpson-Mazzoli Act promised enforcement, border security, and legal reforms in exchange providing amnesty to illegal immigrants already here. The compromise didn’t work. Two decades later the problem was worse than before.

A compromise on immigration is not like a compromise on other issues. It undermines the efficacy of border and immigration management. For instance, it makes no sense to pass a law that strengthens border security and incentivizes illegal migration (by, say, offering amnesty).

Dismissing Einstein’s definition of insanity, both George W. Bush and Barack Obama repeated Reagan’s failed formula. Thus, comprehensive efforts failed to get through the legislative process in 2007 and 2013. The sins of those efforts will be present in any bill that tries to address too many topics at once. The trade-offs necessary to compromise will peel off potential supporters and mire the legislation with political and policy problems.

One way to break out of damnation alley is that one side wins the political debate, allowing politics to be put aside and the focus to turn to solution-oriented legislation. In a Manichean world, where the president’s opposition advocates for open borders in all but name, odds are Americans might well opt for Trump. While his rhetoric might be just as extreme as his opponents, in practice his policies have proven far more practical looking. Most Americans are on board with improving border and immigration enforcement, preserving national sovereignty, modernizing the legal immigration system, and improving the wealth and welfare of all Americans.

If Trump wins the political fight, then the last move he should make is to assemble a grand bill that attempts to accomplish all this at once. It would only squander a mandate. Rather than bundle legal immigration, border security, and enforcement reforms into one comprehensive package, legislation addressing each area should be debated separately, each advancing on its own merit. That’s the best way to keep a pro-immigration and pro-enforcement agenda on track.

How to Do the Hard Part

A prime reason that reforms fail is the compulsion to start with the most controversial challenge: how to handle many illegal immigrants already here in numbers that exceed the capacity of enforcing the law, many of them deeply rooted in their communities.

The right answer is: don’t start there. Amnesty is not the answer. Don’t look for an expansive legislative solution that accounts for every person illegally in the United States. If legislators start knowing the administration won’t go there, then the process can turn to legislating on the steps where they can agree, and everything isn’t held hostage to amnesty.

That said, the administration can fairly, efficaciously, and humanely deal with the unlawfully present population, reducing the population without a sweeping amnesty in a manner that respects the rule of law, helps deter future illegal immigration, and serves the best interests of all Americans.

There are four appropriate ways to address the unlawfully present population: deportation and removal; voluntary departure; temporary relief from deportation; and cancelation of removal. By segmenting the unlawfully present population and using the right tools for the right groups, the administration can proactively address the challenge of illegal immigrants without a comprehensive bill or a general amnesty.

There is no good argument for not deporting aliens who have criminal records, whether they are violent crimes or identity theft, drug possession or trafficking or other so-called “victimless crimes.” In addition, the government must deport individuals whose crimes might be limited to just violating immigration laws. The government doesn’t have the resources to deport every illegal immigrant, but they must demonstrate that the law is and can be enforced—otherwise, laws have no deterrent effect. To that end, the administration should continue to emphasize cities and states cooperating with immigration enforcement and discourage practices like “sanctuary cities and states,” which seek to nullify federal immigration law and obstruct its enforcement.

U.S. law already includes provisions for grants of voluntary departure. Others may seek to depart without a formal application. When illegal aliens voluntarily depart the country rather than face removal proceedings, this contributes to enforcement through attrition. This does not require a concerted strategy to harass individuals or deny social services. Nevertheless, by creating a culture of compliance with U.S. laws, some illegal immigrants will recognize the declining perceived value of unlawful presence. Their departure will not only reduce the unlawfully present population but could also serve to discourage future illegal migration. There are over one million illegal aliens in the United States who have already been ordered by the courts to leave the country but who have not compiled. At the least, the goal of U.S. policy should be to seek their voluntary compliance.

There is nothing wrong, under extenuating circumstances, with allowing illegal aliens to remain present for a period of time for reasonable reasons. What is wrong is to try to turn this tool into a loophole to avoid the enforcement of immigration law. For example, former President Barack Obama overreached with his Deferred Action for Childhood Arrivals (DACA) program. He didn’t consult Congress and there was no end-date to “temporary.”

What is reasonable is not to change the authority for temporary relief from deportation to allow de facto amnesty or a path to citizenship. Any legislation that addresses the status of DACA recipients, persons in temporary protected status, or persons in other programs, should not allow open-ended residence in the United States or create a path to citizenship. Temporary relief from deportation or removal should be for a reasonable, defined period. Aliens should be required to reapply for admission to the United States after deportation.

The laws allow relief from deportation for a limited number of illegal immigrants in specific circumstances. Congress might consider adjusting the requirements to qualify for cancellation of removal, but only after substantial and sustained reductions in illegal immigration. No program should include an automatic pathway to citizenship. Otherwise, under current law, illegal aliens who have been unlawfully present in the United States for over one year (with the exception of aliens who entered the United States before April 1, 1997), and are deported or removed must wait at least ten years before applying for permission to enter the United States. Again, based on significant reductions in illegal immigration, it might also be appropriate to adjust this requirement to offer an incentive to illegal immigrants to leave the U.S. voluntarily and seek to return through lawful immigration or a nonimmigrant visa.

The administration ought to stand up now and declare that these are the tools it will use to address the unlawfully present and take the promise of a general amnesty off the table once and for all—then Trump should get about dealing with the other parts of the problem—border security, immigration enforcement, legal immigration reform and patriotic assimilation.