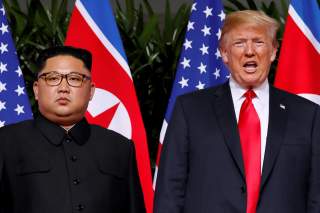 Last June, amid dramatically rising tensions on the Korean Peninsula, President Donald Trump traveled to Singapore to meet with DPRK supreme leader Kim Jong-un. While unorthodox, there is little denying that the president’s top-down approach created an opportunity for a breakthrough that eluded his predecessors. The two leaders agreed in principle on the goal of the denuclearization of the Korean Peninsula. Largely symbolic with many essential details left unresolved, the meeting dramatically reduced tensions in the region and created space for diplomacy to succeed. As retired Generals, Admirals, Ambassadors and Senior Executives we believe that, as the President prepares to return to the region, his focus must be on obtaining results. He must move beyond symbolism if he hopes to make real headway towards ending the danger of the North Korean nuclear program.

The nuclear issue is a proxy for the viability of the regime. That is, the threat is not North Korea’s acquisition of nuclear warheads, but it is the status and influence of the regime in the region. President Trump’s conversations with Kim Jong-un about denuclearization require strategic diplomacy unlike making real-estate deals or negotiating a business merger.

Intent on advancing U.S. interests and safeguarding peace in the region, we must consider the concerns of those sitting on the other side of the table. Negotiations require intense and sophisticated preparation.

So, just what does Pyongyang want? Before he sits down with Kim Jong-un again, the president and his advisors need to try to answer that question. Fortunately, like his father and grandfather before him, the younger Kim (although responsible for horrific abuses) is neither irrational nor are his goals unknowable. Three generations of Kims have played weak hands well, surviving amidst bigger stronger states as the Soviet Union dissolved, China moved from Mao to markets, and their fraternal twin became a global model for economic development and democratic transition. History has taught Pyongyang that their isolation and autarky is the linchpin to their survival. Washington must not continue to mistake the DPRK as overly beholden to China. Also, although economic incentives may tempt Kim Jong-un more than his predecessors, he knows that North Korea has spent far more developing nuclear weapons than it could ever expect to receive for abandoning them. Ultimately, what three generations of the Kim dynasty have sought—and what Kim Jong-un will seek later this month—is the security that would come with a transformed relationship with the United States and the confidence that, if he abandons his nuclear deterrent, the United States will not quickly lose interest in his country or seek to overturn his regime. Although nuclear issues understandably attract the most attention, embracing and crafting that new relationship is the fundamental challenge President Trump faces.

An element of that new relationship is the difficult and drawn-out work of defining denuclearization: freezing DPRK nuclear and missile production and development and, ultimately, producing a comprehensive roadmap to a complete verified irreversible nuclear disarmament. While the president and Kim can start this effort in Vietnam, nuclear programs and mutual animosities that took decades to put in place will take months and years to undo. In this regard, patience, vigilance, and dedication are not just virtues. They are the only possible way forward—taking precedence over pace.

In Vietnam and beyond, we urge President Trump to consider that the DPRK pursued nuclear weapons in spite of the enormous direct cost of the program and the equally high indirect cost of the ensuing international isolation. While sanctions hurt North Korea, Pyongyang was willing to endure them in order to achieve its greater strategic goals. Relieving sanctions would go a long way towards demonstrating U.S. commitment to a new relationship, but we should not assume the DPRK will suddenly shift its priorities. That is not to say that North Korea’s interests exclude sanctions relief as they are clearly prioritizing economic development, but lifting sanctions is only one of many tools that promote progress on denuclearization. Our negotiators must not view sanctions relief as a guarantor of regional security and safety.

Finally, the president can take one other short-term step to create a more constructive atmosphere for the relationship and a new narrative in the region. Agreeing to establish liaison offices in each other’s capital, and committing to upgrade those offices to embassies is an early step in the right direction. Having direct lines of communication would not only facilitate communications on denuclearization issues, but it would also be a platform to talk to Pyongyang about other issues—such as the need to address North Korean human rights abuses and narcotics trafficking and to accept the U.S. commitment to the ROK. The best outcome for the meeting is to move towards more fully normalized ties and a more normal, enduring relationship, that underlie peace and security in the region.

This statement was organized by the American College of National Security Leaders, a network of retired Admirals, Generals, Ambassadors, and Senior Government Executives.