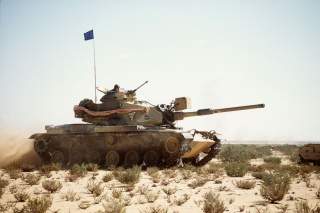 The Middle East is the cradle of civilization—and the cradle of organized warfare between states and tribes. The oldest recorded battles in history, as well as some of the most impactful, are all from this region. While not a comprehensive list by any means, here are five of the greatest battles fought in the Middle East.

The Battle of Kadesh was fought between the Egyptians and Hittites (from modern Turkey) in 1274 B.C.E. at a site in modern Syria near the Lebanese border. Both powers had been fighting to dominate the Levant for a while. This battle is of particular importance to the history of warfare and diplomacy because it is the earliest recorded battle for which details and tactics are known. Additionally, the subsequent peace treaty is the oldest known surviving peace treaty to date. Not only that, but both the Egyptian and Hittite copies have been found.

Putting aside the obvious importance of the battle for historians, Kadesh was quite significant. It was the largest chariot battle in history, with about 6,000 chariots involved. Subsequently, chariots became a lot less common because of improvements in horse breeding and equipment that made cavalry more useful. Constant warfare between the two states was a factor in the collapse of many of the Bronze Age civilizations shortly after when the Sea Peoples destroyed the Hittite. The actual battle itself began when the Egyptian Pharaoh Ramesses II moved swiftly north to capture the city of Kadesh only to have his forces separated in their haste and to find a Hittite force near him. Though the Egyptians almost lost, they gained momentum due to tactics, bravery, and from taking advantage of the Hittites stopping to loot the Egyptian camp. Historians believe the battle was a draw and both powers claimed victory.

Fate works in strange ways. Empires that are strong and seemingly undefeatable for centuries crumble in merely a few years. This is what happened to the Assyrian Empire, which had dominated the Middle East for three centuries, ruling over or obtaining tribute from the Israelites, Babylonians, Elamites, Medians, Persians, and many others. Yet the Assyrian Empire, mighty as it was, collapsed very abruptly after the Battle of Nineveh, near Mosul in Iraq, in 612 B.C.E. when the Babylonians, Medes and Persians from modern Iran, and Scythians from the modern Russian steppes brought the Assyrians down.

The Assyrians were a shockingly brutal empire, even by ancient standards. Their rise to power began in the 10th century B.C.E., and they aimed to totally annihilate their enemies by displacing and resettling defeated populations. Assyria peaked around 627 B.C.E. but was constantly exhausted by war, civil war, and dealing with resentful enemies. It had recently conquered Egypt and had to deal with that land too.

After a bitter struggle lasting many years, various peoples allied against Assyria arrived at the walls of Nineveh, the capital of the empire and captured the city after a three month siege. According to a Babylonian record, “they carried off the vast booty of the city and the temple and turned the city into a ruin heap.” Although the Babylonian Empire rose on the ashes of Assyria to rule over much of the same territory, it was never as powerful, and it should not be forgotten that Assyria was only brought down with help from peoples outside of the original area of power and civilization in the Fertile Crescent. Afterwards, power in the Middle East steadily began to move away from Syria and Iraq and towards Persia, Anatolia, and Greece.

The Battle of Gaugamela was one of history’s most important battles in which Alexander “the Great” of Macedon defeated Darius III of Persia in 331 B.C.E. Up till then, the Persian Empire had been the greatest empire the world had ever seen. Alexander invaded it ostensibly as revenge for the Persian invasion of Greece over a hundred years before, but mostly for glory.

And what a glorious campaign it was. Though heavily outnumbered, he won battle after battle and had already seized Anatolia and Egypt after defeating Darius at the Battle of Issus (333). Darius tried to arrange a truce and give Alexander half his empire but Alexander decided to be the sole master of the region; thus the two armies met at Gaugamela near Mosul, Iraq.

Greek records undoubtedly exaggerate the strength of the Persians, but the Persians did have a larger force at the battle. Why did the Persians lose so badly despite their numbers and history of successful empire building? Alexander used both psychology and tactics well. He outflanked the Persian forces, drawing their best troops to their sides and then charged at Darius in the exposed center. Darius then broke and fled, along with his army.

Much of the Persian Empire then fell into Alexander’s hands and Darius’ commanders grew restive, including one who murdered him. The fall of the Achaemenid Persian Empire broke Persian power for five centuries and began a period of Greek influence and dominance through the Middle East, and the rise of many Hellenistic Kingdoms. I would be wary, though, of casting this, as some major battle between East and West that resonates into modern times; rather it was the victory of one people over another and the subsequent spread of the victor’s culture, a situation common in history.

In the seventh century C.E., the dominant superpowers of the Middle East were the Byzantine (Eastern Roman) Empire and the Persian Sassanid Empire. All other states in the region were minor kingdoms or tribes. Nobody at the start of that century would have conceived that the history of the region would change forever very soon, but that’s what happened at Yarmouk near the present day Syrian border with Jordan and Israel in 636 C.E. This battle resulted in the Muslim Arab conquest of Syria and Palestine, and Egypt being cut off from the rest of the empire, making that easy to conquer shortly after. In other words, the modern Muslim Arab Middle East was a direct consequence of Yarmouk.

The first two Caliphs Abu Bakr and Omar began attacking their neighbors, partially to direct the energies of revolting tribes elsewhere. The Arabs had already conquered Damascus and a large Byzantine army went to Syria to put an end to the Arab threat. Under the Arab general Khalid ibn al-Walid, the Arab forces raiding Syria pulled back and concentrated in one spot to fight the Byzantines. A smaller Arab force then defeated a larger Byzantine one over six days using a variety of tactics and a Byzantine failure to use cavalry when needed. Jerusalem fell to the Arabs not too long afterwards, and the Muslim era of the Middle East began in full swing.

It is indeed consequential to world history that within ten years of Muhammad’s death, the Arabs defeated and conquered large parts of both the Byzantine and Persian empires. But while the Byzantines survived, the Sassanid Persians were not so fortunate. While the Arabs were seizing the Levant, they were also fighting the Persians, who they defeated decisively at Qadisiyyah also in 636, conquering Iraq. At this point, all was not lost to the Persians, who were still secure in Iran and Central Asia. But unlike the Byzantines with their distant capital of Constantinople, the Persian capital of Ctesiphon (near Baghdad) was lost. Therefore, the Persians felt obligated to regain Iraq, which lead to further Arab campaigns against Persia, that had not been previously planned.

Thus befell the Battle of Nahavand in 642, a great disaster for the Persians and the “victory of victories” for the Arabs. Nahavand is located in western Iran near Hamadan and the mountainous terrain was thought to have favored the Persians. Again, the Arabs were outnumbered by their enemy. They resorted to a ruse, spreading a rumor that the Caliph had died, which caused the Persians to emerge from their defences onto a plain where they were defeated in the span of three days. After this battle, Persia could not be salvaged, exhausted as it was by war with the Arabs and Byzantines. The entire Iranian plateau was then laid bare to the Arabs who soon conquered Iran and then Central Asia.