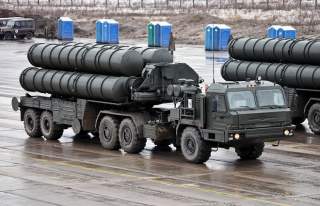 Relations between China and Russia are currently quite good. The two countries enjoy brisk bilateral trade ($90 billion in 2014), are both members of the Shanghai Cooperation Organization and are the only heads of state guaranteed to show up at the other’s World War II anniversary commemorations.

Sino-Russian ties haven’t always been this good. The Soviet Union and China briefly went to war in the late 1960s along the Ussuri River line, a disputed area claimed by both sides. Russia inherited the disputed area from the Soviet Union. What would happen if 21st Century China pressed territorial claims against Russia?

China is building an arsenal of long-range weapons systems that are commonly thought to be for use against American forces in the Western Pacific. But with range comes versatility: in the event of war, many of these weapons could easily be pointed north and west against Russia.

Both Russia and China would be in tremendous peril were the other an adversary. Large conventional forces, a long shared frontier, economic disruption and nuclear arsenals on both sides make a war between Asia’s juggernauts a nightmare scenario. If relations between the two countries suddenly went south, here are five Chinese weapons of war Russia should fear.

China has been aggressively pursuing research into so-called hypersonic weapons. Hypersonics travel much faster than conventional weapons, cutting enemy reaction times and imparting tremendous kinetic energy on their target. Such weapons would allow China to quickly cover the vastness of Russia; a hypersonic weapon launched from western China could strike Moscow within twenty minutes.

On June 7th, China tested its WU-14 hypersonic weapon for the fourth time in eighteen months. Boosted by a repurposed DF-21 intermediate-range missile to speeds of up to Mach 10, the unpowered weapon then glides to target. The high speed and flight profile of boost-glide weapons makes them difficult to intercept by conventional surface-to air-missiles and anti-ballistic missiles.

Although not a deployable weapon, the WU-14 will be instrumental in developing real hypersonic weapons systems in the near future. Future hypersonic weapons could be launched from aircraft, ships and land-based launchers, providing a fast, accurate, conventional or nuclear, first-strike weapon.

The Chinese cruise missile program has been under development for decades, and the latest and most potent outcome is the DF-10A cruise missile. The DF-10A—sometimes referred to as the CJ-10 and DH-10— is placed under the command of China’s Second Artillery Corps, the military service branch charged with controlling China’s conventional and nuclear missiles.

China’s newest cruise missile is reportedly similar in appearance to the American Tomahawk, with a pair of stubby wings and a turbofan engine. Indeed it may have benefitted from American Tomahawk missile technology recovered from the Sudan, Somalia, Serbia and Afghanistan.

The DF-10A’s range with a 500 kilogram warhead is estimated to be approximately 941 miles. Accurate to less than ten meters, the DF-10A could be used by China to strike targets throughout Russia’s Far East and Siberia, flying in under Russian radar defenses and striking critical targets.

The J-20’s mission set is currently unknown and the plane could eventually become a long-range air superiority fighter like the Su-27, long-range strike fighter like the F-15E Strike Eagle, or even a tactical bomber along the lines of the Russian Su-24. Whatever the role, the J-20’s twin engines and long legs would make it relevant in any conceivable conflict with Russia.

One Chinese weapon system that would make the Russian military sweat in wartime is… a Russian weapon system. The S-400 surface-to-air missile, which Russian President Vladimir Putin recently approved for purchase by China, would be an extremely dangerous foe for the Russian Air Force to deal with.

According to reports, China is purchasing six battalions of S-400s. The radar system is capable of tracking up to 100 targets at a time and engage twelve simultaneously. It also has some limited capability to detect stealthy and low-observable aircraft.

Each S-400 battalion consists of a command post, radar systems and twelve launch vehicles, each with four 40N6 missiles. Each S-400 missile has a range of 200 kilometers, meaning each battalion could conceivably cover 400 kilometers. Theoretically, six battalions could cover 2,400 kilometers of frontage — enough to cover sixty percent of the Sino-Russian frontier.

In a future war, it is quite likely China will attempt to make Russia a landlocked country on its eastern border. The seizure of Vladivostok — and further inland, Khabarovsk — would unseat Russia in the Far East. Vladivostok, in particular, is the home of the Russian Pacific Fleet.

One way to take Vladivostok is by sea. China currently has four Type 071 amphibious landing platform ships, each capable of landing approximately a battalion of Chinese marines.

Each ship displaces 20,000 tons and is nearly 700 feet long. The Type 071 ships can carry a battalion of marines—roughly 400 to 800 troops—and up to 18 armored vehicles. The ship is equipped with both a well deck for launching amphibious craft and a helicopter hangar and landing deck for launching helicopters.

Supplementing the Type 071s will be the Type 081 landing platform dock ships. Similar to the American Wasp-class amphibious ships, the Type 081s will have a full-length flight deck allowing them to deliver even more marines by helicopter. Four Type 081s are planned, and together with the Type 071s would be able to land a force of two brigades of combat-ready marines.