5 Latin American Priorities for the next U.S. President 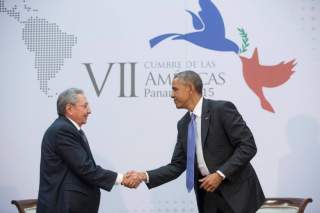 For much of the last century, Latin America has seldom been a major focus for U.S. foreign policy. Yet President Obama’s controversial Cuba policy appears to have brought the region back into play. But Obama’s days in the Oval Office are numbered. How will the next occupant of the White House treat our neighbors to the south? Here’s a five-step approach the next president should take to get Latin American relations on a positive track.

President Obama stunned many when he announced his intention to normalize relations with the Castro regime. While the administration gave Havana a cornucopia of concessions—from removing Cuba from the list of State Sponsors of Terrorism to supporting the ending of the embargo—it appears to have demanded nothing in return. All it has offered, to date, is wishful thinking.

The White House insists that commercial engagement with Cuba will usher in democracy.  A brief look at history quickly disproves that notion. Communist regimes in the Soviet satellites fell because of economic weakness and internal opposition supported by Western governments. When freedom-loving leaders such as Lech Walesa and Vaclav Havel emerged, the United States enacted policies to support their efforts. As a result, countries like Poland and the Czech Republic are now free and prosperous democracies.

Our next President should model his or her Cuba policy off of these experiences. Rarely are we granted the unique opportunity to simultaneously uphold democratic principles and ensure U.S. national security. Our future president must recognize that freedom doesn’t flow from normalizing relations with a dictatorship. It flows when the seeds of political change sprout and are then properly nourished.

In response to last summer’s humanitarian crisis on the southwest border, the Obama administration developed the absurdly overpriced “U.S. Strategy for Engagement in Central America.” This $1 billion request triples current foreign assistance levels to countries in which there is little government accountability. The overwhelming majority of the funds requested would be dedicated to economic development assistance—an area riddled by waste and corruption. Meanwhile, the strategy calls for no boost in funding activities of the Department of Defense, the principal agency in maritime and aerial drug interdiction.

The United States cannot afford to ignore the region’s deteriorating security conditions. This does not mean the future president should blindly support increasing foreign assistance. Questions remain about these governments’ capacity to use assistance effectively and their political will to implement and sustain economic and rule-of-law reforms. Without buy-in and commitment from the Central American governments, increased assistance will have negligible effect in improving conditions there.

Push for a responsible outcome in Colombia’s negotiations with the FARC terrorist group.

Twenty years ago, Colombia was on the verge of failed-state status thanks to the predations of FARC (Revolutionary Armed Forces of Colombia), an internationally designated terrorist organization. Now, in 2015, the Colombian government is a few steps away from fully defeating the terrorist group. Yet for the last three years, Bogota has been engaged in conciliatory “peace talks.” FARC negotiators have essentially extorted concessions from the Colombian government, issuing a host of demands, including impunity for war crimes and the legal right to run for political office. All the while, the FARC has violated ceasefires and continued its illicit activities, which run the gamut from narcotics to kidnapping. Most recently, FARC slaughtered ten Colombian soldiers. Unfortunately, the White House has given the Colombian government’s appeasement agenda its seal of approval.

The future of these negotiations matters greatly to the United States. On top of high levels of bilateral trade, since 2000, almost $10 billion in U.S. military and economic assistance has gone toward combatting the FARC and the illicit narcotics industry. Plan Colombia is regarded as the United States’ most successful endeavor in security cooperation. As such, the next president should be wary of any deals that grant the FARC impunity, particularly FARC members on our treasury department’s Specially Designated Nationals List.

Prepare for a humanitarian crisis in Venezuela.

Venezuela’s unraveling has been two decades in the making. A legacy of socialist mismanagement and corruption has destroyed the once-wealthy nation’s economy and its political system. Sky-high inflation rates and decreased oil revenues have forced the most oil rich country in the world to ration electricity, food, and even toilet paper. The security situation is also spiraling out of control. Venezuela now has the world’s second highest homicide rate, and you are more likely to be kidnapped in Venezuela than in Afghanistan, Colombia, Iraq, Libya, Syria, or Yemen. The ongoing political crisis complicates the situation as well. Last year, massive anti-government protests rocked many parts of Venezuela. As a result, political opponents, including members of the government, were jailed.

There is little doubt Venezuela is a powder keg, and the looming crisis will have far reaching implications for the western hemisphere. PetroCaribe nations dependent upon Venezuelan fuel subsidies find themselves particularly vulnerable. The government’s support for illicit activities and its intimate relationship with Iran, Russia and other U.S. adversaries have also spawned imitation among its regional allies. Mitigating the coming crisis should be a priority.

Revitalize the idea of the Free Trade Area of the Americas (FTAA).

Two decades ago, the noble effort to create a Free Trade Area of the Americas began. Initiated at the first ever Summit of the Americas in 1994, the plan sought to integrate the economies of the Americas. Led by the United States and supported by regional allies, the initiative was derailed by Hugo Chavez, the former president of Venezuela, in the mid-2000s.

Since then, Latin America has essentially been divided into two groups following two different models of economic development. On one side are the Bolivarian Alliance (ALBA) countries that have followed Venezuela. In these nations, inward looking, state-centric led development has resulted in low levels of economic freedom and declining levels of prosperity. On the other side is the trade and economic integration bloc, the Pacific Alliance (PA). Composed of Chile, Colombia, Costa Rica, Mexico, Peru and soon, Panama, the PA has become the poster child of successful economic integration. Its countries have much higher levels of economic freedom. As a result, the peoples of these countries enjoy higher per-capita incomes, and the countries of the PA are more attractive to foreign investors.

It would be futile to try to revive the FTAA at this moment. But that does not mean the principle of increasing economic integration should be lost. Eleven of the U.S.’s current twenty free trade agreements are with countries in Latin America. The next president should add more to the list. Additionally, the United States should work at developing open market policies in Latin America. Currently, we are only a PA observer state. Full membership would benefit all involved.

Ana Quintana is a policy analyst specializing in Latin American issues at The Heritage Foundation’s Allison Center for National Security and Foreign Policy.