Europe's 5 Most Lethal Weapons of War 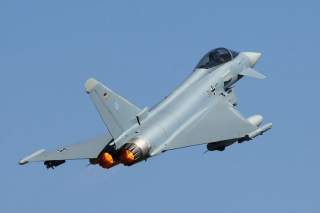 For roughly four centuries, world affairs centered around Europe. Much of Europe’s centrality was based on its superior military power.

Through the middle of the 20th century, Britain, France, Spain, Portugal, and others controlled vast stretches of land in Africa, Asia, and the Americas; some possessions dwarfed all of Europe in size and population. Only two world wars, at the cost of tens of millions of lives, exhausted Europe’s world-dominating military capabilities.

The recent dysfunction in the European Union obscures the continent’s impressive military legacy. Even after the United States eclipsed Europe as the principal Western military power, NATO members developed sizeable arsenals to counter the threat of the Soviet Union and its proxies. With the collapse of the U.S.S.R., Europe’s governments dramatically cut their defense spending. The rise of non-Western nations like China and India further displaced Europe’s global position.

Still, many countries in the European Union, and particularly NATO members, field some of the world’s most advanced military technologies. Some countries, like France, Britain, Germany, and Sweden, maintain domestic arms industries. Many governments benefit from state-of-the-art American technologies like the F-35 Joint Strike Fighter.

Europe may no longer be the global force it was in centuries past, but its armed forces operate potent instruments of hard power. Below are five formidable European weapons of war:

The Eurofighter Typhoon is the product of a four-nation consortium including the United Kingdom, Germany, Italy, and Spain. Eurofighters are multirole combat aircraft, capable of performing a range of missions. Entering service in 2003, the Typhoon promises to remain a staple in both European and non-European militaries until the 2040s.

Twin EJ200 Turbofan engines give the Eurofighter a combat radius of up to 1,389 km, and Typhoons can reach speeds as high as 2,125 km/hour. A special “supercruise” feature allows the jet to maintain speeds above Mach 1 without using its afterburner.

The Eurofighter has 13 hardpoints to carry weapons. It can be configured for air-to-air and surface attack missions. Typhoon jets can carry both Beyond Visual Range Air-to-Air Missiles (BVRAAM) and Short Range Air-to-Air Missiles (SRAAM). For ground strikes, the Eurofighter can carry Enhanced Paveway EGBU-16 laser guided bombs and advanced anti-armor systems. The Typhoon’s speed and versatility make it an attractive option for states in Europe and beyond. In addition to the initial four countries that sponsored the Eurofighter project, Typhoon jets have entered service in Austria and Saudi Arabia, and several other governments are considering purchase the aircraft.

Great Britain’s Royal Navy once reigned supreme on the world’s oceans. Although the United States Navy eclipsed its prowess, the United Kingdom still maintains one of only three blue water fleets in the world. Although London recently decommissioned its Invincible Class aircraft carriers, the Queen Elizabeth models will soon take up the Invincible’s role. The first vessel, the HMS Queen Elizabeth should be commissioned in 2016 and will enter service in 2020. A second carrier, the HMS Prince of Wales, is also under construction.

Queen Elizabeth Class ships will be significantly larger than previous British models. Each carrier will have a displacement of 70,600 tons and a length of 283 meters. Propelled by two Rolls Royce MT30 gas turbines and four Diesel Generator Sets, the Queen Elizabeth and Prince of Wales will be able to reach speeds of up to 25 knots.

London’s new carriers are built to support the latest military aviation technology, including up to 50 fixed wing and helicopter aircraft. Queen Elizabeth Class vessels can carry a compliment of up to 36 F-35B Short Take Off/Vertical Landing (STOVL) planes. Further into the future, these ships may also support operations for the navalized F-35C variant.

France, along with Britain and the United States, is one of three countries that presently possess a blue water navy capability. The Marine Nationale fields the Charles de Gaulle aircraft carrier in order to protect French interests worldwide and support allied combat operations. The Charles de Gaulle entered service in 2001, but France initially planned to build a new aircraft carrier similar to the British Queen Elizabeth Class. However, these plans were discarded in 2013. Thus, the Charles de Gaulle remains an integral component in Paris’s sea operations, and will for years to come.

The Charles de Gaulle is propelled by twin PWR Type K15 nuclear pressure reactors. This system allows the carrier to achieve speeds of up to 27 knots. This French vessel’s nuclear propulsion system was refitted and modernized in 2007, making the Charles de Gaulle an ever more capable asset. To protect against anti-ship weapons fired by hostile airplanes, the Charles de Gaulle comes equipped with a special surface-to-air missile system developed by Eurosam. A Euroslat-designed anti-torpedo warning system helps the carrier avoid water-borne threats.

Although the United States led the development of Lockheed Martin’s F-35, significant support arrived from several European countries, including the United Kingdom, Italy, the Netherlands, Denmark, and Norway, who co-sponsored the Joint Strike Fighter program. Each of these nations will soon employ a range of F-35 variants, the first fifth-generation jet to be deployed by a European military.

The F-35’s Pratt and Whitney F-135 engine give the JSF a maximum speed of Mach 1.6 and a combat radius of over 1,100 km. The F-35 is a stealth aircraft with a reduced radar signature, allowing it to fly even more inconspicuously than the advanced Eurofighter Typhoon. Although the JSF can store weapons externally, it can also fly with a clean configuration. This vastly improves its aerodynamics and stealth capabilities.

Several variants will be produced, giving Europe’s militaries options to perform a range of missions. The navalized F-35C is designed for carrier take offs. Meanwhile, the F-35B can support navy missions and other specialized tasks thanks to its short takeoff and vertical landing capabilities. The F-35 is equipped with several air-to-air weapons, including AIM-120AMRAAM missiles and a General Dynamics GAU-22/A 25mm cannon. Paveway IV laser guided bombs and small diameter bombs allow the JSF to hit surface targets.

The British committed $2 billion to the F-35 project, and are ultimately expected to buy roughly 130 of the planes. London is accordingly designated as the project’s only Level I Partner. Italy, which pledged $1 billion, and the Netherlands, investing $800 million are Level II Partners. Norway and Denmark each gave $125 million to the project and are designated Level III Partners. For all of the controversies and problems that plagued the F-35 in development, the JSF promises to become a staple in many militaries.  Beyond the United States and Europe, Canada, Turkey, Australia, Japan and Israel all plan to deploy the F-35, while other governments around the world are exploring the option.

Three centuries ago, Sweden was a major military power that dominated the Baltic Sea, from Germany to Russia. Though Stockholm has since retreated from its great power status, it maintains a well-respected domestic arms industry that produces a range of high quality products. Sweden is currently developing a new submarine model, the A26, to succeed its already formidable fleet of Gotland-class submarines.

The A26 is still in development. The project emerged at the end of the Cold War, when Sweden was still concerned with the Soviet threat. As a neutral non-NATO state, Sweden developed its own independent military deterrent. With a newly assertive Russia on the Baltic’s eastern shores, the A26 is increasingly relevant. The A26 will have a displacement of 1,900 tons, stealth capabilities, and a Sterling air-independent propulsion (AIP) system that will allow the vessels to operate quietly.

With renewed design work underway in 2009, the A26 will likely enter service in 2018-19. The Swedish companies SaabKockums and ThyssenKrupp will lead development in the port city of Malmö, on the Baltic Sea.

Evan Gottesman is an editorial assistant at The National Interest.