5 Reasons AIPAC Is Dead Wrong about the Iran Deal 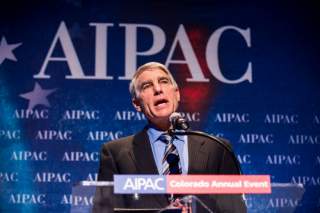 Congress now has less than 60 days to review the Joint Comprehensive Plan of Action (JCPOA) negotiated by the P5+1 and Iran. Over the next few weeks, the members and their staff will need to sift through the 159 page agreement, hear testimony from administration officials, intelligence and nonproliferation experts – as well as a barrage of talking points and misrepresentations from skeptics and opponents—before casting a momentous vote on a resolution of approval or disapproval of the agreement.

The fundamental choice is whether to support this agreement—which will verifiably block all of Iran’s potential pathways to nuclear weapons for the next generation, or more—or follow the advice of pressure groups like the American Israel Public Affairs Committee (AIPAC), which argues that the agreement falls short of expectations and should therefore be rejected in the hope of a better deal down the line.

On July 15, the President of AIPAC, Robert A. Cohen, announced that his organization is opposing the agreement “because it does not achieve the minimum requirements necessary for an acceptable deal.”

Not only is AIPAC’s post-July 14 assessment of the Iran deal selective and flawed, but its demand that “Congress should reject this agreement, and urge the administration to work with our allies to maintain economic pressure on Iran while offering to negotiate a better deal ....” is reckless and irresponsible.

A comparison of AIPAC’s June 2015 paper “5 Requirements for a Good Deal,” which outlines about 22 distinct goals in 5 areas, shows that the final agreement clearly meets AIPAC’s criteria in at least 19 of these 22 requirements. AIPAC now says the final agreement does not meet its requirements in these three areas, but its critique in these areas is based on technically dubious assumptions about what is necessary for an effective deal.

The following is a summary assessment of how the JCPOA stacks up against AIPAC’s list of “5 Requirements.”

1. The Agreement Allows for Robust Inspections and an Effective Verification System

In a July 15 press release opposing the final agreement, AIPAC claims that it fails to provide “anytime, anywhere” IAEA access. That is true only if AIPAC expected Iran to submit to random inspection of any site without reason or notice—something that is not necessary to effectively verify Iranian compliance with the agreement. If the United States had demanded such terms, it would have been rejected by Iran as an attempt to use the nuclear deal as a pretext for unconstrained spying, killing the prospects for an agreement.

The agreement will put in place a stringent and intrusive verification regime that gives the IAEA the tools necessary to monitor compliance with the final agreement and detect covert nuclear activity.

The deal sets up a layered monitoring regime, with continuous or very frequent International Atomic Energy Agency (IAEA) access to, and monitoring of, Iran’s declared nuclear facilities, including its centrifuge sites at Natanz and Fordow.

Iran will also be required to implement and ratify even more robust IAEA inspections under the terms of its additional protocol to its comprehensive safeguards agreement, giving international inspectors timely access to any Iranian facility of proliferation concern, including military sites.

To guard against attempts by Iran to delay access for more than 24 days to a site of concern, the agreement stipulates that any one of the P5+1 has the option of immediately re-imposing earlier UN Security Council sanctions on Iran. Furthermore, the IAEA’s sophisticated environmental sampling technologies would detect any nuclear material after 24 days even if Iran attempted to cleanse the site or remove equipment and material, and any effort to do so would be easily detected by satellite intelligence.

The agreement will also require Iran to adopt the modified code 3.1 safeguards that require early notification to the IAEA of design changes or new nuclear projects in Iran. These provisions will last indefinitely to help detect and deter future nuclear weapons related efforts.

The agreement will go beyond the additional protocol by allowing continuous IAEA monitoring of Iran’s uranium mines and mills for 25 years, and centrifuge production, assembly, as well as storage facilities, for 20 years. This continuous surveillance on the entire nuclear supply chain will make it extremely unlikely that Iran could divert materials or components for a secret nuclear weapons program without detection.

UN sanctions will only be suspended if and when Iran fully explains and answers questions regarding its past activities with possible military dimensions (PMD), and the IAEA verifies that it has completed other major nuclear nonproliferation and transparency steps. Under the final nuclear deal, Iran has agreed to provide the information and access the IAEA needs to complete its investigation by October 15th. If Iran meets that deadline, the IAEA aims to deliver its assessment of that information by December 15. Until Iran cooperates with the IAEA on this matter, the UN Security Council sanctions and other sanctions will remain in place.

With the cooperation from Iran on the PMD issues that is required by the JCPOA, the IAEA will have more information with which to inform its monitoring and verification strategies in the future.

Nevertheless, in its July 15 press statement, AIPAC erroneously claims the JCPOA “does not clearly condition sanctions relief on full Iranian cooperation in satisfying IAEA concerns over the possible military dimensions of Tehran’s program.”

If AIPAC was expecting the P5+1 to hold out until Iran “come[s] clean” and admitted that it sought nuclear weapons in the past, there would be no deal. And even if such an admission could be extracted from Iran leaders, it would not erase the knowledge Iran may have gained from weapons related experiments.

What is more critical is putting in place the limits and monitoring measures necessary to guard against an Iranian nuclear weapons effort in the future—which the JCPOA accomplishes.

The JCPOA meets all of AIPAC’s June 2015 “requirements” concerning sanctions relief, including conditional relief from sanctions, no “signing” bonus (i.e. early release of frozen Iranian financial assets), established consequences for noncompliance, and a clear and tough dispute resolution mechanism, which favors the United States and its European partners).

Contrary to AIPAC’s June 15 press statement, sanctions will not be lifted as soon as the agreement is adopted. Rather, sanctions relief from the European Union, the United States, and the UN Security Council will not occur until the IAEA verifies that Iran has taken all of the key nonproliferation and transparency steps, which will be at least several months after the “adoption” day for the agreement.

A key highlight of the agreement is that it allows for U.S. and European economic and financial sanctions and earlier UN Security Council sanctions to be re-imposed quickly if Iran fails to live up to its end of the deal.  The dispute resolution mechanism in the JCPOA stipulates that if a disagreement over implementation arises and cannot be resolved in 35 days and any one of the P5+1 believes Iran in in noncompliance, previous UN Security Council resolutions can be snapped back. The JCPOA will maintain the snapback provision for 10 years, and the P5+1 have agreed to re-impose sanctions in the event of a major Iranian violation for at least an additional five years.

The agreement also sets up a mechanism to ensure that Iran can only obtain nuclear-related materials and technologies through an approved procurement channel that will be carefully monitored and enforced to prevent Iran from secretly obtaining these items for a clandestine weapons program.

In his letter outlining the reasons for AIPAC’s opposition to the P5+1 and Iran nuclear deal, AIPAC’s Robert Cohen also complains that the JCPOA releases Iran from restrictions on ballistic missile development in eight years, and a heavy arms embargo (put in place by the UN Security Council to provide leverage on the nuclear issue) in five years. Given the fact that these restrictions were put in place to push Iran to negotiate a verifiable, long-term nuclear deal, it is a significant accomplishment that the United States succeeded in extending these restrictions for so long.

It is also important to consider that the United States has other tools available to curtain Iran’s access to heavy weapons and components for ballistic missiles, and that Iran’s ballistic missiles are far less of a strategic threat without a nuclear payload. Only through the implementation of the JCPOA can the P5+1 block Iran’s pathway to arming ballistic missile with nuclear warheads.

4. Iran’s Pathways to Nuclear Weapons Are Blocked for More Than A Generation

The JCPOA requires very substantial reconfiguration of Iran’s nuclear program so that it cannot amass enough bomb-grade uranium in any less than 12 months for a period of 13 years.

The JCPOA accomplishes this vital objective by reducing the number of installed centrifuges from nearly 20,000 to 6,000 IR-1 machines, of which only 5,060 would be allowed to enrich uranium and to no more than 3.67 percent fissile U-235.