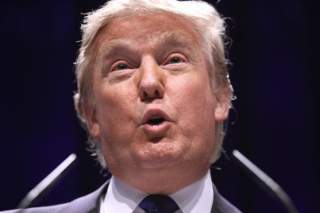 One remarkable element of American politics is the extent to which unthinkable developments become commonplace once they happen. Consider simply the men who have become president by defying the conventional wisdom that said they could never reach that office, because they weren’t right for the times and the times weren’t right for them. They include Abraham Lincoln, considered a western bumpkin with only a single congressional term under his belt and no discernible sophistication about him. Or Ronald Reagan, considered a failed actor, a man whose detractors felt he was simply too dumb to be president. And let’s not forget Barack Obama, clearly an accomplished and polished politician whose race, it was believed by many, would constitute a barrier because the country wasn’t yet ready for a black president. But when these men actually reached the White House it seemed entirely natural. The country casually absorbed the reality of something that previously had seemed impossible.

Now we have Donald Trump emerging as the presumptive Republican presidential nominee, a development utterly unthinkable until it happened. When he first announced his candidacy, it was considered a joke. When he emerged as the leader in polls, it was said he would falter as soon as actual voting commenced. When he began winning primaries, we were assured it wouldn’t last. When he kept winning, the party elites mounted plans to outmaneuver him through convention manipulations, because this simply couldn’t happen.

And yet here he is, occupying a position once thought unthinkable. And now it seems possible that he actually could become president. How did this happen? How did the unthinkable become commonplace? Herewith a stab at identifying the five greatest reasons for the Trump emergence, offered with a proviso that whenever the unthinkable becomes reality, there are always understandable and compelling reasons that simply weren’t perceived beforehand.

The disciplines of this powerful movement had become so entrenched in the American culture that we didn’t really perceive just how much seething anger it was generating among Americans who didn’t view the world as the enforcement legions of political correctness demanded. Of course, everyone now knows how this bludgeon of right thinking has practically destroyed free speech and free thought on American campuses, as spineless administrators have stood by or joined in. That clearly disturbs many Americans, particularly those who want their children to seek an education in an environment that is at least open to political thinking consonant with their own views and principles. But it wasn’t clear until Trump’s emergence just how much ordinary citizens chafed at this cultural phenomenon in terms of the impact on their own everyday lives. Political correctness has sought, with much success, to narrow the range of political discourse by labeling as illegitimate certain views and thoughts that, just a few years ago, were considered entirely acceptable.

Thus, if you believed in secure borders for America, you ran the risk of being labeled a racist or a xenophobe. Same thing if you wondered aloud whether, given the historical antagonism between the West and Islam and the anti-Western fervor of Islamist fundamentalism, it might be best to curb the Muslim inflow into the West. If you harbored traditional views about marriage that, a generation ago, were considered entirely normal by the vast majority of Americans, suddenly you found yourself labeled an extremist or a bigot. If you believed that a civilized society requires a certain respect for law enforcement, you watched in disgust as an assault on the nation’s police generated diffidence among officers and their leaders, and contributed to a sudden rise in crime.

A stark reflection of this could be heard in a radio news report in Seattle recently about a high school youth there who put up a sign saying, “Build the Wall.” He was ordered to take it down, which was appropriate enough if the school had a policy against overt political expression on campus. But the principal had another rationale for the action. “We don’t tolerate racism at this school,” she told the radio station. The student was forced into a groveling apology. Thus did we have a student expressing the views of a politician who had collected nearly 11 million votes in the GOP primaries—yet was forced to recant upon pain of being cast out of polite society as a racist.

Donald Trump stood up to all of that, and he did so with pugilistic resolve. No presidential politician had done that before, and now it’s clear that many Americans were waiting for someone to express their frustrations over the zealous cadres of political correctness. The most stark example was Trump’s call for a temporary ban on the entry of Muslims into the country, pending a better understanding of the domestic terrorism threat. His suggestion was considered outlandish, if not utterly outrageous, and he was roundly attacked from both left and right. But exit polls during the primary season revealed that significant numbers of Americans agreed. Political correctness may have silenced many of those people, but it couldn’t convert them.

Before Trump’s emergence on the political scene, no politician had demonstrated a credible seriousness about sealing the U.S. border. The country had never really managed to get beyond what might be called the Great Fraud of 1986—amnesty for illegal immigrants already in the country in exchange for promises of a sealed border. But then the illegal influx increased dramatically under the noses of inert government officials. Nobody believed their leaders in Washington were really serious about the problem. Meanwhile, liberal commentators and intellectuals delighted in suggesting that the game was up, that the influx of immigrants was transforming the country’s politics in ways that disfavored traditionalists and Republicans and anyone who felt that the old cultural sensibilities of the country were worth protecting and sustaining. So the message was: Get over it. Republican leaders, with their straight-line analysis, generally embraced the view that they would have to get on board this bandwagon or the party would be swamped by newcomers who found distasteful the old Republican principles of self-reliance, nationalism and secure borders.

Then along comes Trump, who not only takes on the globalist elites, with their casualness toward open borders, but does so with force and an open disdain for the political correctness that previously had enveloped the debate. In doing so, he declared unmistakably that this was one politician who took the issue seriously and would do something about it. By transforming the terms of debate on the issue, he transformed also the dynamics of the issue.

Late last year the Pew Research Center reported that America’s middle class had shrunk to less than half the population, compared to 61 percent in the late 1960s. These are the people who once were considered the bedrock of American society and the engine of much of its growth and progress. Many factors contributed to this decline, but one was the deindustrialization of America. As the country’s industrial base was hollowed out, so was the working class that propelled those industrial factories and enjoyed the fruits of those solid blue-collar jobs. Many of those people traditionally did well even without college degrees. But now that has changed. “Those Americans without a college degree stand out as experiencing a substantial loss in economic status,” said the Pew report.

Research by an MIT professor named David Autor, reports the Financial Times, suggests that “the earnings gap between the median college-educated US male and the median male with a high school education doubled between 1979 and 2012.” This during a time when there wasn’t much overall wage growth in the country at large.

Much has been written about the social havoc this economic decline as wreaked on America’s traditional middle class, with significant increases in divorce, alcoholism, drug use and suicide. Many of these people feel that they have been left out and left behind by the political elites of the country, focused as they are on helping the poor and bringing in immigrants who put downward pressure on wage rates. Few politicians spoke to them or their plight—until Trump. His answer is to attack the deindustrialization of the country through protectionist tariffs. Whether that can work is an open question, but it evinces a concern for those people left out in the cold by the country’s industrial decline.

I have written in these spaces about globalism and nationalism as representing probably the most fundamental political fault line in the country today. Globalists don’t like borders. They believe goods, money and people should be able to move freely around the world without much interdiction or burden. They don’t hold much truck with nationalism—a relic, in their view, of the 1648 Peace of Westphalia, which codified the recognition of coexisting nation states. Nationalists believe in the nation state, particularly their own. That’s why they believe in borders. Globalists seem enchanted by overseas adventures either to foster American greatness (neoconservatives such as George W. Bush) or to salve the hurts and wounds of humanity (Wilsonian interventionists such as Hillary Clinton). Globalists dominate the country’s elite institutions—the media, academia, big corporations, big finance, Hollywood, think tanks, NGOs, charitable foundations.