A 5-Step Plan for a New Indian Maritime Strategy 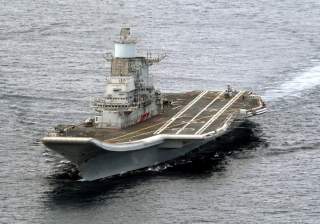 Whither Indian maritime strategy? New Delhi reportedly wants to fit out a 200-ship navy by 2027, centered on aircraft-carrier task forces, a mix of conventional and nuclear-powered submarines, and missile-toting aircraft and surface combatants. That’s up from 124 by my tally. What will India do with a navy whose numbers mushroom by over 60 percent in a dozen years?

It’s a fair and indeed vital question to ask. India would be far from the first seagoing nation to build ships for shipbuilding’s sake. Now, it’s important to preface any foray into naval matters with a caveat, namely that it’s crucial not to get transfixed by brute numbers of hulls. Big round numbers exert a particularly potent allure—witness America’s bid for a 600-ship U.S. Navy during the 1980s, and its struggle to maintain a 300-ship navy today.

Anyway. Estimating the combat punch of a 200-ship Indian Navy requires observers to ask: which 200 ships is the navy procuring? After all, an unarmed tanker counts the same as a flattop in bean-counting terms. They’re both hulls—even though one of these things avowedly is not like the other.

So don’t be taken in by raw numbers when contemplating naval matters. They can befuddle you, lie to you, or seduce you into false or dangerous conclusions. For instance, a navy composed of 200 light combatants resembling coast-guard cutters would be a fine thing for many purposes, but it would suffer a grim fate in a slugfest against a fleet of 200 guided-missile cruisers. You have to gauge the armament and aggregate battle capacity of each vessel, the mix of ship types, and the fleet’s overall fighting power relative to likely foes. Combat strength, in other words, is a relative thing. You measure yourself not against some abstract standard but against rival pugilists on real-world oceanic battlegrounds.

And then there’s the all-important human element. The finest weapon is no better than its wielder. The state of seamanship, tactical acumen, and élan among mariners helps determine the victor in high-seas combat. In short, a navy’s adequacy derives from a complex mélange of material and human factors. Measuring it demands more than arithmetic.

So much for the preliminaries. What sort of strategy should guide India’s nautical endeavors, assuming it makes good on its shipbuilding ambitions? The Indian Navy published a flurry of strategy or strategy-like documents some years back. The governing directive is its 2007 Maritime Military Strategy. For all its merits, that document was meant for a status quo power inhabiting largely tranquil surroundings. It reads more like a primer on what maritime strategy is, and on what navies do in generic terms, and less like a plan of action for fulfilling goals in a competitive environment.

Few would agree that the Indian Ocean remains quiet today. The Maritime Military Strategy antedated the surge in piracy off Somalia, a seaborne terrorist attack on Mumbai, and China’s encroachment in South Asia. Accordingly, it’s worth setting aside past strategic documents for the sake of discussion and starting from a blank slate. Herewith, my Five-Step Plan for devising Indian maritime strategy:

An ongoing debate among strategists is whether a potential combatant needs an enemy to have a strategy. The drift of opinion appears to favor yes. Which is helpful from a strategy-making standpoint. Strategy is about prevailing in interactions with some antagonist bent on thwarting your will. No antagonist, no interaction; no interaction, no strategy. China’s rashness of recent years simplifies the problem of finding a focal point for Indian maritime strategy—just as it did for the American sea services, whose latest strategy took on a far keener edge than its kinder, gentler 2007 predecessor exhibited. Likewise, the Indian Navy should name names—and frankly admit that war is possible and warrants careful forethought and preparation.

In 2007 it made sense for New Delhi to softpedal the prospects for strategic competition in India’s environs. Beijing hadn’t yet telegraphed its desire to mount a regular if not standing presence in the region. Prospects for amicable relations on the high seas remained. Nor had China’s leadership yet jettisoned its charm offensive, which depicted China as an innately peaceful sea power. Yet its conduct in the China seas long ago gave the lie to any charm offensive, its most recent military-strategy white paper vows to pursue “open seas protection”—code for naval operations beyond Asia’s offshore island chains, in expanses like the Bay of Bengal and Arabian Sea—and China’s navy has been probing regional waters through submarine cruises.

To deter such competitors, India must field impressive maritime might, display the resolve to use that might under certain circumstances, and convince competitors that it will actually make good on its deterrent threats. Deterrence, in other words, demands the ability to win, to foil an antagonist’s ability to win at a cost acceptable to him, or to frustrate his ability to win altogether. Persuade some rival that defying your will is pointless, and you boost your chances of deterring him. At the very least you postpone a reckoning—and can try to improve your competitive standing in the interim.

When designing forces to discourage mischief, moreover, remember that appearances count. Sea power isn’t a beauty contest, but it—like all human competition—is an exercise in constant one-upsmanship. Strategists point out that whoever most observers think would prevail in combat emerges the victor from peacetime encounters involving maritime forces. Ships festooned with missile launchers, big guns, and embarked aircraft, then, may win out over modest-looking opponents in the eyes of layman spectators—even if the plain Janes could easily best them in action.

So outward appearances help determine whether peacetime deterrence or coercion works. The Indian Navy mustn’t forego combat capability for the sake of looks—but naval architects and shipwrights must remain mindful that looks matter when making political use of sea power. It should factor into ship design.

Take a page from the greats:

What kind of strategy would let Indian mariners deter in peacetime while accomplishing their goals in wartime? Studying the red team’s playbook is one place to start. China’s armed forces assume they’ll start off as the weaker party to any showdown with the U.S. military and its allies in the Western Pacific. Such an assumption also befits the Indian military as it contemplates prospects for a showdown with China in the Indian Ocean.

But it need not despair. Mao Zedong relates how the lesser contender fighting at or near home can exploit its home-field advantage to wear down a superior foe, even and then reverse the force balance, and triumph through a conventional counteroffensive. Consulting Mao’s works may help India glimpse an effective “active defense” strategy for South Asia. New Delhi need not import a made-in-China strategy wholesale, but it can certainly borrow from the Great Helmsman.

And there’s more than one variety of active defense. Even as they look abroad for insight, Indian seafarers should also go back to their roots. The Indian Navy is a descendant of the Royal Navy and heir to the British naval tradition. Writing not long before Mao, British sea-power theorist extraordinaire Sir Julian Corbett fashioned a saltwater concept of active defense—a concept eerily similar to Mao’s terrestrial variant. (No word on whether Mao faces an honor-code violation for plagiarism.)

Corbett recounts, for instance, how Royal Navy commander Admiral Lord Torrington balked a stronger French fleet’s efforts to land troops in Ireland in 1690. The upshot: the lesser force can confound a greater one if handled deftly—buying time to bolster its forces, seek allies, break enemy alliances, or induce the enemy to disperse his own forces into beatable detachments.

Active defense, in short, denies a more powerful red team its goals while the blue team seeks the upper hand. Not a bad approach for an Indian Navy that trails its most formidable competitor by many measures—yet will bestride its home field should oceanic conflict come.

While looking to foreign thinkers is right and fitting, sea-power-minded Indians have a theorist of their own to consult, namely K. M. Panikkar. A steady stream of works poured forth from Ambassador Panikkar’s pen, most notably India and the Indian Ocean (1945). His geostrategic wisdom can help Indian officialdom adapt insights about maritime strategy to the subcontinent’s special geographic position.

Were he writing today, for instance, Panikkar might remind posterity that India juts out into the Indian Ocean, while shipping lanes crisscross nearby. He might also advise them that the subcontinent’s fortuitous “interior” position confers opportunities to employ shore-based implements of sea power against outsiders. In this age of long-range precision firepower, sea power is about more than fleets, and indeed about more than navies.