5 Things South Korea Can Do to Wrest Control from Washington 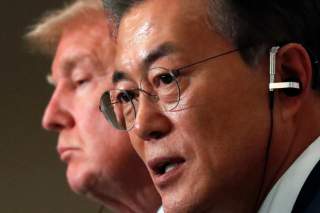 I have never met South Korea’s president, Moon Jae-in; nor am I likely to have the opportunity. Even if that were to happen somehow, the most I could expect is a handshake and a perfunctory exchange of pleasantries. He certainly wouldn’t ask me for foreign-policy advice. South Korea does not lack for savvy experts on statecraft, and he would, and should, turn to them. Ultimately, South Koreans must decide their country’s policies.

Still, as the crisis on the Korean Peninsula has been heating up, I have had extended conversations with South Korean friends and officials, current and former. I have a learned a great deal from them, but I have been reluctant to opine on what their government should—and should not—do. They understand the significance of North Korea’s quest for nuclear weapons better than I, and it would be presumptuous for an outsider to provide unsolicited advice. But my interlocutors haven’t always let me off the hook. Some have said, in effect, “We’ve provided our assessment. Now tell us what precisely you would do in our circumstances.”

Here is how I have responded:

First, South Korea requires an independent strategic vision that corresponds to its considerable strategic weight and isn’t essentially an extension of American preferences. Some context to clarify what I mean: South Korea has made enormous advances since the 1950s. Back then it was a poor country. Its per-capita GDP in 1957 was roughly equal to Ghana’s GDP. Not only has South Korea left Ghana far behind, it has become a wealthy society. It has a per-capita income of nearly $40,000—ahead of New Zealand, Spain, and Italy, and edging toward Japan, Britain, and France. Its $1.93 trillion GDP ranks fourteenth in the world—ahead Canada, Spain and the Netherlands. Its exports total nearly $512 billion, placing it fifth; only China, the United States, Germany and Japan export more. Whether it’s automotives, ships, computers and telecommunications, advanced electronics, or nuclear power plants, South Korean firms have made their mark in western markets—something unimaginable in the 1950s. South Korea is also a major military power. According to the Stockholm International Peace Research Institute, South Korea’s defense spending was $37.27 billion in 2016 and ranked eighth internationally. (Incidentally, that figure exceeded North Korea’s entire Gross National Income: $32.76 billion according to the widely-cited estimates of South Korea’s Central Bank.) Even careful studies conclude that assaying the military balance between the two Koreas is complicated, especially because of the many unknowns (what Clausewitz called “friction”) that shape the outcome of wars. Tallying the number of armaments (tanks, artillery, aircraft, warships, submarines and missiles) misleads by highlighting the North’s numerical edge and obscuring the South’s overwhelming qualitative superiority. Which competent general would choose Seoul’s state-of-the-art military over Pyongyang’s outmoded, shopworn counterpart? At minimum, the standard story that South Korea would be overrun without the backing of American troops is questionable.

Despite this strategic heft, when it comes to national security South Korea remains an American dependency. Under the UN Command System created during the Korean War and the Combined Forces Command arrangement established in 1978, South Korea’s armed forces were placed under the command of an American general. That arrangement was changed in 1994: South Korea gained control of its military in peacetime. In the event of war, however, command reverts to the United States.

South Korea should terminate this arrangement, which it has been reluctant to do, and gain full control of its armed forces—at all times. It should not hesitate out of fear that the American defense commitment will be weakened. The United States hasn’t deployed troops in South Korea (presently 28,500) for more than half a century out of beneficence but because successive American administrations have concluded that a substantial military presence in Northeast Asia serves the national interest. That assessment won’t change, especially given the growth of Chinese military power. Besides, by taking full control of its armed forces, South Korea need not cease military cooperation with the United States. Seoul would, however, acquire greater agency in the partnership. That, in turn, will encourage more independence in South Korean strategic thinking. President Moon favors national control of South Korea’s armed forces in wartime, as did his ill-fated predecessor, Park Geun-hye. So a change on this front now appears probable. It is certainly long overdue.

Second, the South Korean government should make it unequivocally clear that it will not support an American attack aimed at preventing the deployment of a fully operational North Korean nuclear force. (Pyongyang is already close to achieving its goals but still needs to solve technical problems, such as reducing the size of its warheads and ensuring their survival in the heat and turbulence they will encounter upon reentering the Earth’s atmosphere.) A preventive war would prove catastrophic for South Korea (as well as for the North) for reasons that have been detailed in numerous analyses. Talk of a surgical preventive attack amounts to fantasy, and South Korea should not stake its future on magical thinking.

Seoul should go further. It should refuse to permit its landmass, territorial waters and airspace to be used for launching a preventive war. It should also reconsider the wisdom of conducting military exercises with the United States during a time of mounting crisis. North Korea has not been cowed by these shows of force, let alone induced it to stop its nuclear and ballistic missile tests. The maneuvers and other forms of saber rattling have, however, certainly ratcheted up the tension (though North Korea is scarcely blameless). That, in turn, has increased the danger that accidents, misperception, or technical failures could trigger a spiral from crisis to war.

A glance at a map of the Korean Peninsula shows why the interests of Washington and Seoul diverge when it comes to preventive war. This has become even clearer now that the White House is occupied by a president who repeatedly demonstrates stunning ignorance about the realities on the Korean Peninsula, who publicly undercuts the diplomatic efforts of his (already hapless) secretary of state, and who declares that it would be an honor to meet North Korean leader Kim Jong-un on one day but threatens to “totally destroy” North Korea the next. These wild, Twitter-enabled oscillations make it all the more imperative that Seoul oppose the preventive war forthrightly and not allow itself to be swept away by the tide of events.

Third, South Korea should rethink its decision to forgo nuclear weapons. Seoul considered building them in the 1970s, but declassified U.S. government documents show that it relented under American pressure. In 1975, it finally ratified the Nuclear Non-Proliferation Treaty, which it signed in 1968, and in 2004 agreed to the implementation the provisions of the International Atomic Energy’s Additional Protocol. Undoing all of this would be a big deal. But the strategic ground has now shifted. No matter how much South Koreans may desire a denuclearized North Korea, that outcome has now become all but impossible. North Korea, poor, friendless, fearful and suspicious (even of China, its main benefactor), regards nuclear weapons as the great equalizer that will deter an American attack. On more than one occasion North Korea’s state media and officials have remarked that Muammar el-Qadaffi and Saddam Hussein might still be around had they possessed nuclear weapons. Kim Jong-un has made the acquisition of an operational nuclear force a top priority. Shows of force by the American military, economic sanctions, behind-the-scenes diplomacy by China and Russia, and Trump’s threats and tantrums haven’t changed his mind. Indeed, we should anticipate additional tests—and soon.

Once North Korea’s nuclear-tipped missiles can strike the American homeland, it won’t matter that the United States has—and will long have—many more warheads with which to retaliate against a North Korean attack than Pyongyang will to strike the United States. The game will change irrevocably for South Korea once its northern neighbor acquires a viable nuclear force. What’s known as extended nuclear deterrence will be all but worthless: the United States won't risk, say, Los Angeles to save Seoul. It could, of course, be argued that North Korea’s nuclear weapons will be useful solely to deter an attack, that a nuclear strike on the United States or South Korea would produce a devastating American response, and that Pyongyang will discover, as other nuclear powers have, that nukes aren’t particularly useful for extorting concessions from nonnuclear countries. That’s a valid conclusion; but the accompanying message that Seoul needn’t fret about Pyongyang’s nuclear arms won’t persuade many generals or civilian military strategists in South Korea.

South Korea’s decision to jettison its no-nuclear-weapons policy will make big waves, to put it mildly. Japan, China and the United States will protest, and Seoul will come under intense pressure to stick to the status quo—from them and from other quarters. The change of policy will also provoke controversy at home, even though discussions about the nuclear option are now more common in South Korea than ever before and (according to a recent poll) 60 percent of South Koreans favor creating a national nuclear force. President Moon has said that his country won’t go down this path. But South Korea should not rule out the nuclear choice unless it has full faith in extended deterrence.