5 Things to Watch For in North Korea's Peace Negotiations 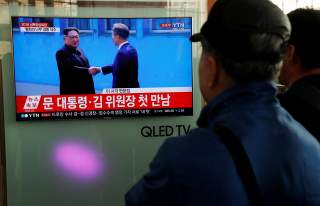 On April 27, South Korean President Moon Jae-in and North Korean leader Kim Jong-un held the third inter-Korean summit that issued a joint declaration promising their commitments towards the complete denuclearization of the peninsula and ending the Korean War within this year.

The summit was historic given that it was the first time a North Korean leader had stepped on South Korean soil since the armistice in 1953. The two previous summits were held in Pyongyang; one between Kim Dae-jung and Kim Jong-il in 2000, and another between Roh Moo-hyun and Kim Jong-il in 2007. The two Koreas also held several high-level joint communiques and declarations in 1972, 1992, 2000, 2007 and 2018 to take incremental steps toward peace, cooperation and unification.

Friday’s summit was significant given that its greater focus on tension reduction. However, much of the declaration were broad in-principle agreements with vague wording. Indeed, the vague wording was one of the key reasons why an agreement was reached, leaving the specifics to be ironed out in future inter-Korean summits and the U.S.-North Korea summit. But the vagueness also run the risk of the stakeholders having different interpretations over the specifics, which are apt to become sticking points in negotiations.

The summit was also highlighted by Kim Jong-un’s character. The South Korean and international media noted that Kim Jong-un was diplomatic, sociable and witty in his exchanges. Yet such characteristics were also experienced with those who interacted with Kim Il-sung and Kim Jong-il. Thus, while Kim Jong-un may be trying to demonstrate himself as a modern-day statesman, there is no change to the fact that he remains to be a totalitarian dictator. The critical question is not so much about how Kim Jong-un behaves in meetings, but how he formulates and executes his strategies.

Going forward, there are several uncertainties that warrant attention.

First, the peace-building process hinges on the series of upcoming summits, starting with the U.S.-South Korea and U.S.-North Korea bilateral summit. The two Koreas also agreed to trilateral meetings involving the two Koreas and the United States, as well as a quadrilateral involving the two Koreas, the United States and China. There are also questions over whether any future dialogues will include Japan and Russia, reviving the Six Party Talks but in different form. But the glaring question is North Korea’s demands. While the complete, verifiable and irreversible dismantlement of North Korea’s WMD program will be vital, Pyongyang will make counterdemands for security guarantees that could not only include the lifting of economic sanctions, but also the normalization of U.S.-North Korea relations, a peace treaty with compensation, decoupling of the U.S.-South Korea alliance, as well as the withdrawal of the American security umbrella from East Asia. Naturally, the negotiations and summits are going to be tough, making it all the more important to go in well prepared with the right strategies. Yet it is also critical to ensure that the two Koreas and other stakeholders (namely China and the United States) do not settle for a rushed agreement with vulnerabilities that could revive tensions in the future.

Second, on what terms will the two Koreas declare the end the Korean War? Will there be a conditional or unconditional peace treaty, or will it simply be an in-principle declaration? Much depends on how Seoul and Pyongyang work with their pledge to “carry out disarmament in a phased manner” and alleviate tensions through confidence-building. measures Working out the details will prove to be a challenge in the upcoming dialogues between defense ministers and general-level officers over the posture and capabilities of the militaries on both sides of the 38th Parallel. Specifically, there are questions over how North Korea will deal with its WMD but also the 1.3 million-strong, massed military with much of it deployed below the Pyongyang-Wonsan line. Moreover, there are also territorial matters, particularly in setting the “maritime peace zone” in the Yellow Sea that would inevitably impact the Northern Limit Line that is still under dispute.

Third, how regular will the inter-Korean summits be? A South-North hotline is already installed, and the joint declaration ended by stating President Moon’s visit to Pyongyang in the fall. Kim Jong-un also reportedly expressed his will in going to Seoul if invited. Should the inter-Korean summit become a regular event, it will be a significant step in building a sustainable working relationship. Although Friday’s summit was thoroughly prepared, rehearsed and protocoled, it nevertheless left a strong impression that the two leaders were working to build a close relationship, hugging and holding hands, planting a tree together, having off-the-record conversations during a walk and breaking bread with their respective spouses. Such chemistry will prove to be pivotal in facilitating progress, but also in dealing with the challenges that may emerge along the way. However, the question would be whether the two leaders can produce a framework that can be inherited by the future administrations in Seoul to ensure a consistent and sustainable cooperation and peace-building process.

Fourth, how will the ending of the war be linked to the long-term roadmap for unification? While a peace treaty will end the war itself, depending on how it is worded, it may bolster the existence of the two Koreas that would require constitutional amendments and other legal and policy reconfigurations on both sides to acknowledge the other Korea as a sovereign state. Moreover, greater complexities are also seen in how the two Koreas are on divergent paths. On the one hand, South Korea embarked a new chapter in its democracy with the impeachment of Park Geun-hye. On the other hand, North Korea continues to further bolster Kim Jong-un’s totalitarian rules and continues to be the encyclopedia of human rights abuses while encouraging greater market activities. Although how unification takes place depends on a variety of scenarios (largely relating to Pyongyang’s fate), dealing with the political differences would raise myriad questions in the future.

Finally, the most pressing question concerns North Korea’s sincerity which has a poor track record. Pyongyang could adhere to the atmosphere of the summit by making significant steps toward peace and reconciliation or betray it by returning to bellicose actions. But Kim Jong-un’s recent maneuvers indicate that his new strategy lies somewhere in between the two—the unchartered waters we are now entering.

Friday’s inter-Korean summit raises more questions than answers. While the summit was no doubt significant, it is critical to not look at it as a single event, but rather as a part of a process that has just begun. Kim Jong-un has come into the process well prepared with a strategy. The question is, do we?