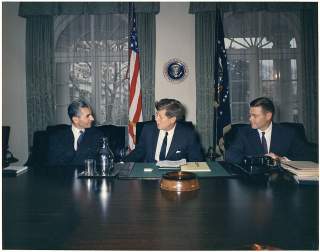 What should we make of Russia’s interference in the 2016 U.S presidential election? Ask a member of Congress and that person will be quick to argue that Moscow’s intrusion into America’s democratic process is one step short of a full-blown declaration of war. From some of the rhetoric, you might assume that Washington, DC and Moscow are now competing in a Cold War 2.0. “Putin the Great” is scheming behind closed doors with his generals, Russia hawks are barking in President Trump’s ear to respond with forceful measures and lawmakers like Sen. John McCain are using Russia’s aggression around the world as justification to increase the U.S. defense budget by hundreds of billions of dollars.

To Republicans and Democrats, Russia’s breaking into the Democratic National Committee’s servers is a concerted assault on democracy that cannot be tolerated. “The Russian government, directed by Vladimir Putin, launched a brazen attack on our elections that demands an aggressive response,” Sen. Jeanne Shaheen said. Ditto for Sen. John McCain, who said, “Every American should be alarmed by Russia’s brazen attack on our democracy.”

Let’s not sugarcoat it: what the Russian Federation did was unacceptable. Hacking into the email accounts of one of America’s political parties and selectively releasing information in order to tilt the scales of a national election in a sovereign state is the very definition of a sovereignty violation. But we should should keep Moscow’s behavior in perspective. The United States may be up in arms about a Russian war on democracy and a violation of state sovereignty today, but for decades Washington, DC was known as the place where behind-the-scenes actors plotted coups, attempted to overthrow governments and tampered with the election processes of other countries.

For two years, presidents Harry Truman and Dwight Eisenhower authorized the Central Intelligence Agency to undergo a covert campaign against Jacobo Arbenz. Arbenz was the democratically elected president of Guatemala who campaigned on a platform of decreasing the wealth disparity between landowners and peasants. The Truman and Eisenhower administrations viewed him as a threat to America’s dominance in the Western Hemisphere and a challenge to the Monroe Doctrine. At the time, anticommunism in Washington, DC was at such a fever pitch that any foreign leader who was remotely thought to be susceptible to Soviet influence was seen as an extension of the communist project.

Arbenz eventually resigned and fled the country—in part due to Washington’s material support to the anti-Arbenz campaign. Eisenhower signed a $2.7 million budget for “subversion” against the Arbenz government, which included the drafting of a list by the CIA of individuals in Guatemala to be removed from the political arena—either through assassination or exile. Half a century later, the then-Guatemalan president would apologize to Arbenz’s son for removing his father from power and ushering in a period of internal violence that resulted in more than one hundred thousand civilian casualties.

Chilean politician Salvador Allende was the number one enemy of the United States in Latin America during the early 1970s. Chileans saw him as someone who would usher in economic reforms, but the Nixon administration viewed him as a communist beachhead in South America—a place where the Soviets could cause trouble. According to the CIA’s own historical analysis, the agency attempted to prevent Allende’s election in 1970 by disseminating weapons to select anti-Allende groups. When that effort failed, Allende won a plurality in the elections and the CIA caught wind of a coup being planned by the Chilean military. The United States didn’t interfere with the process—an action that Chilean officers likely took as a defacto acceptance of their coup attempt.

Historical documents that have been declassified and released to the public show just how much of a threat Allende posed to the Nixon administration. During meetings in the White House, President Nixon made clear to his advisers that Allende’s government was a danger to U.S. national security, a possible ally for the Soviet Union and an administration that should at the very least be contained by making the economy bleed. Allende eventually committed suicide in 1973 when he was surrounded by Chilean military forces. Following his death, Augusto Pinochet led a seventeen-year dictatorship. He was eventually indicted for murder.

Perhaps no CIA-orchestrated coup has had as significant of a long-term effect as the joint U.S.-British operation against Iranian prime minister Mohammed Mossadegh—a man who sought to nationalize Iran’s oil industry. Britain had control over Iran’s crude oil resources and approached the United States to hatch a plan to remove Mossadegh from power. The British wanted to replace him with a more palpable figure who would strike a better deal with the West on oil revenue. Just as the British were concerned about oil resources being taken away from them, Washington, DC was increasingly convinced that Mossadegh would open Iran to the Soviets. This led CIA director Allen Dulles to authorize funding to bring about Mossadegh’s removal.

The gambit eventually worked, due to anti-Mossadegh propaganda sprinkled into the Iranian press and a large segment of the Iranian military ready to take action. Mossadegh was eventually overthrown and Mohammad Reza Shah returned as the leading authority. Actions committed during this time frame have had a far greater impact on U.S.-Iranian relations than Eisenhower could have dreamed. Ayatollah Ali Khamenei continues to cite the fall of Mossadegh in his speeches to the nation, and Iranian hard-liners continue to use that period of time as an example for why Washington, DC cannot be trusted.

A discussion about U.S. coup attempts in the third world wouldn’t be complete without a mention of Fidel Castro and his Cuban revolution. There was no greater bogeyman for the United States in Latin America during the Cold War than Castro. He drove a U.S.-supported dictatorship off the island and would come to rule the country for six decades before handing power to his brother, Raúl.

According to the Church Committee investigation, the CIA tried to assassinate Castro on at least eight separate occasions. Some of the plots were so fantastical that lawmakers at the time couldn’t believe they were actually being seriously considered. “The proposed assassination devices ran the gamut from high-powered rifles to poison pills, poison pens, deadly bacterial powders, and other devices which strain the imagination,” the report states. And that was only the assassination plots. The CIA orchestrated two large-scale covert operations: the Bay of Pigs in 1961 and Operation Mongoose in 1962. Both operations aimed to overthrow the Castro regime and replace it with a U.S.-sponsored client government. Needless to say, all of these operations failed and Fidel Castro remained on his perch for over half a century.

These are only four cases in which the United States conspired to pull the levers in a foreign country’s domestic political system. This century, Washington, DC has already led two regime change missions in the Middle East (Iraq in 2003 and Libya in 2011) and would likely have contemplated a third mission in Iran if diplomacy wasn’t successful in capping Tehran’s nuclear enrichment capability. Washington, DC is still very much a place where regime change is seen as a viable and worthy policy option to consider.

So, the next time you hear lawmakers denouncing Russia for a violation of state sovereignty and an incursion into America’s democratic system, remember that in the past the United States hasn’t exactly practiced what it has preached.