5 Tips for Negotiating a Nuclear Deal with Kim Jong Un 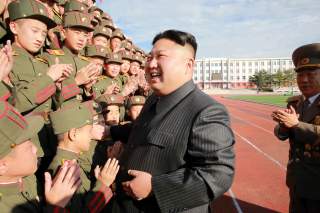 President Donald Trump, North Korean leader Kim Jong-un, and their respective delegations are scheduled to finally meet in Singapore on June 12, the first time in history that an American and North Korean head-of-state will talk to one another directly. As Trump is fond of saying, the summit will be “yuuuge,” a groundbreaking event in the world of international diplomacy that will be covered around the world. Trump is all about publicity and the showmanship, no doubt relishing the opportunity to show his political adversaries that he has the stamina, strength, and intellect to do what every other U.S. president could not: denuclearize the Korean Peninsula.

Assuming the summit next month is still on (Pyongyang has been making noise of late that it will cancel the meeting if Washington doesn’t lower its triumphalist tone), everything will need to go right if Trump hopes to fly back to Washington with positive diplomatic news to boast about at home. As successive U.S. administrations have discovered at one point or another, negotiating with the North Koreans about anything—let alone about its treasured nuclear weapons program—is an exceedingly difficult enterprise with numerous sinkholes and steep hills along the way. It is now Donald Trump’s chance to display to his foreign counterparts that he is indeed the world’s most preeminent dealmaker. He can help himself by following these five tips:

If there is any single American the Kim regime disdains with a red-hot passion, it is Trump’s current national-security adviser. John Bolton has been a caste member of international arms control for decades, even serving as the State Department’s top nonproliferation official during President George W. Bush’s first term. Bolton knows his brief, so it would only be natural for him to have some role in the upcoming nuclear talks between the United States and North Korea.

The problem, however, is not Bolton’s intellect or diplomatic skill, but his very selective interpretation of what diplomacy means in practice. Bolton’s history across three separate administrations (Trump is the fourth president Bolton has worked for) and during his tenure at the American Enterprise Institute illustrates just how hardline he is on negotiations of any sort. Diplomacy naturally involves a considerable degree of give-and-take, ego-striking, hand-holding, and patience—none of which Trump’s national-security adviser has emulated throughout his time in government. The word “compromise,” which diplomats consider a necessary tactic on the road to a good bargain, is depicted by Bolton as appeasement and weakness by a superpower in the face of a lesser and more dastardly power. If Bolton is awarded a spot on the U.S. negotiating team or is charged with overseeing the entire process at the White House, then Trump risks putting what could be his first major foreign-policy accomplishment at the mercy of a man who hasn’t supported a single arms control agreement or negotiation in decades.

Some members of the Trump administration, predominately John Bolton, have suggested that the United States should settle for nothing less from the North Koreans than a nuclear deal modeled on the 2003–04 Libya agreement. That accord was based on a simple concept: after Muammar el-Qaddafi files a complete declaration of his weapons of mass destruction programs and permits U.S .and British officials to fly his capability out of the country for destruction, Tripoli will receive an end to economic and political isolation. Bolton often speaks of a “Libyanization” of North Korea’s nuclear weapons program as the right and only way to deal with rogue personalities on the top of rogue regimes.

Yet Kim Jong-un looks back at the Qaddafi experience and sees something completely different: diplomatic trickery by the United States to disarm the Libyan government, making it extremely vulnerable to a Western military attack. If the Kim regime was skeptical about denuclearizing before 2011, then they are downright cynical now after the fate that befell Qaddafi in the wake of the Arab Spring protests, which ravaged his country. The Libyan dictator was eventually caught by his armed opponents and broadcast to the world as a disheveled, dirty, weak and humiliated man who was executed shortly thereafter. Kim has learned from Qaddafi’s public humiliation to not trust anything an American promises at the negotiating table. For the Trump administration to bring the conversation back to Libya in any context is not a constructive way to facilitate the June 12 summit.

Don’t Get Your Hopes Up

If President Trump believes he can land Air Force One in Singapore and reboard after only a few hours with a denuclearization agreement, then he had better put an end to that fantasy. The president can go to sleep and dream of such a scenario, but an accord in which Pyongyang agrees to dismantle its nuclear facilities on an accelerated timetable in exchange for economic and political benefits to be named later is simply not going to happen. Trump needs to set his sights far lower, both for the sake of the talks and for his own sanity. Instead of concentrating on immediate denuclearization, work towards a generic joint statement of intent from Kim Jong-un in which the North Korean leader commits to a general denuclearization-for-normalization framework whose specifics are to be negotiated later at the expert level. Such a document would not be the exciting public spectacle Trump is anticipating and would look like any number of previous declarations that Pyongyang has signed over the last quarter-century. But it is likely the only thing Washington will be able to extract from the Kim regime so early in the process.

According to a May 16 report from Time magazine, Trump has not devoted an extensive amount of time and effort towards preparing for the June 12 summit. If the report is accurate, it would be an understatement to say that this is cause for concern. A highly unpredictable and at times volatile commander-in-chief who is unfamiliar with North Korean history and is inexperienced with these high-stakes geopolitical negotiations cannot—and indeed should not—enter the room without some general awareness of what he is aims to achieve and communicate to the other side. Trump may think he can use his personality and small-talk to break the ice with Kim, but no amount of friendliness and cajoling is going to mean anything if the White House doesn’t establish its bottom-line negotiating position to the North Koreans immediately. This is what talking points and background briefings are for—to educate a president about the diplomatic tactics of the other side. The more prepared Trump is, then the less likely it is that the North Koreans will take him for a ride.

Get Congress into the Process Early

Any agreement made between Washington and Pyongyang will require congressional support. Executive agreements signed by one president can easily be overturned by the next, jeopardizing everything the previous administration worked for. Having pulled the U.S. out of the Iran nuclear agreement, Trump has first-hand experience with this dynamic. If he wishes to avoid the same scenario that he bestowed upon President Barack Obama, Trump should be communicating and debriefing members of Congress early and often throughout the talks. As a coequal branch of government, Congress deserves information about what the United States is hoping to achieve, what the country is prepared to concede, and when the United States is prepared to walk away from the table. The White House, in turn, deserves information on what the legislative branch expects and what terms it can live with. The sooner the administration treats Congress as an independent branch with constitutional prerogatives rather than a peanut gallery to be bypassed, the better. International agreements of this sort do not survive for long if the American people, through their elected representatives, are not supportive of it.