5 Weapons Iran Would Love to Buy From Russia 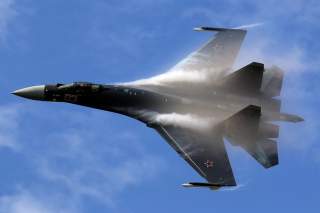 The recent announcement that Russia will begin deliveries of S-300 air defense missiles to Iran rocked western governments—and Israel. Russia is set to deliver five battalions of the S-300 long range surface-to-air missile system, concluding a deal that was originally agreed upon by the two countries in 2007. Deliveries are projected to begin within 18 months.

Iran has anxiously awaited the arrival of the S-300s, which will help the country defend its airspace from hostile aircraft. The presence of the S-300 system will make a raid by American or Israeli aircraft on a resurgent Iranian nuclear program riskier than ever before.

But air defense missiles aren’t the only thing Iran needs. Now that Russia has re-opened the pipeline of arms to Iran, which other weapon systems might Iran want to buy? Due to a Western lack of trust in Iran’s motives—and potential misuse of weapon systems in Syria, Iraq and elsewhere—Russia will likely remain one of two nations (the other being China) willing to sell Tehran arms for the foreseeable future. With that in mind, here are five Russian weapons of war Iran might want to purchase.

Iran has a long history of using anti-ship missiles to threaten shipping in the Persian Gulf. Iran famously used Chinese-made Silkworm missiles against Iraq, Kuwait and U.S.-flagged shipping. Iran also allegedly has a small number of Chinese C-802 missiles, and reportedly manufactures its own version of the weapon.

The purchase of new anti-ship missiles like the Klub would once again give Iran the capability to threaten foreign shipping, and even close the Straits of Hormuz. The new generation of Russian missiles are faster and smarter and are even capable of being launched from camouflaged platforms. The Klub could be the next Silkworm.

The Klub is a turbofan-powered missile that cruises at high subsonic (0.8 Mach) speeds just above the wave-tops. Moments before impact, the Klub pops-up and accelerates to Mach 2.9 and drives onto its target nearly vertically. That dramatically shortens the reaction time for enemy anti-missile defenses. This could be particularly problematic for foreign navies operating in the confines of the Persian Gulf.

The Klub packs a large 881lbs warhead, one version of which has a stated maximum range of 186 miles. A longer-range version, Kalibir, was used by the Russian Navy last month against Islamic State targets.

Iran might be particularly interested in the Klub K, a version that is camouflaged as a standard 40-foot shipping container. The missile system is a self-contained unit that carries four missiles and can be carried innocuously by a container or cargo ship, flatbed train car or truck transport.

Like much of Iran’s military, the Iranian army really needs an infusion of new—or newish—equipment. Iran’s armored corps in particular has suffered in the years since 1979. The Iranian army boasted approximately 2,000 modern tanks before the Islamic Revolution. Iran currently has more or less the same number of tanks, but most are at least twenty—if not thirty or forty—years old. A sizable percentage of Iran’s tank fleet consists of American M60 and British Chieftain tanks purchased by the Shah.

The purchase of a 1,000 or more T-90 main battle tanks would go a long way toward rehabilitating Iran’s tank fleet. Although derived from the T-72, the T-90 is still a useful tank. The T-90’s 2A46M main gun is lethal, and the gun’s ability to fire the Refleks anti-tank guided missile gives it a potential one-shot kill capability out to more than 4,000 meters.

Modern defensive add-ons can help protect the T-90’s crew from current threats. Together, a combination of reactive armor tiles, the Shtora laser jamming system and the Nakidka camouflage system can work together to passively protect the tank. Active protection can be provided by the Arena system, which detects and knocks down incoming anti-tank missiles with radar-aimed rockets.

Iran’s fighter fleet, like the rest of its military, is in need of fresh equipment. Bizarre projects like the Saeqeh, an F-5 Tiger fighter modernized by adding twin tails and homemade avionics, are a sign of Iran’s desperation to match the high-tech air forces of the United States, Israel and the Gulf States.

The Su-35 was designed as a stopgap solution for the Russian Air Force until viable numbers of fifth-generation PAK FA fighters—currently under development—were fielded. The Su-35’s airframe is partly made of titanium and radar absorbent materials are used in key areas. NPO Saturn AL-41F1S engines and thrust vectoring nozzles give the Su-35 a potent combination of range, power and maneuverability.

A multi-role aircraft, the Su-35 can engage targets both in the air and on the ground with an advanced electro-optical targeting system. The Irbis-E passive electronically scanned array radar can search for and target attack aircraft at up to 400 kilometers—and was designed with detecting stealth aircraft in mind. The Su-35 also includes a whopping twelve hardpoints for carrying air-to-air and air-to-ground missiles and bombs, fuel tanks and sensors. A long-range multi-mission fighter, it packs plenty of capability into a single airframe that can travel long distances.

However, while the Su-35 might be the most capable version of the Flanker available on the market, Iran has expressed more of an interest in the two-seat Su-30 variant.

Traditionally thought of as a land power, Iran is also very much a maritime nation. Indeed, the country’s entire southern border lies on the Persian Gulf. The ability to transport Iranian ground forces across the Persian Gulf and land them in Saudi Arabia, Kuwait, Bahrain, Qatar, the UAE, Yemen and Oman could potentially be very useful.

A solution to this could be to order a fleet of Ivan Gren-class tank landing ships. The Ivan Gren-class displaces 5,000 tons and is capable of carrying up to thirteen 60-ton tanks or thirty-six armored personnel carriers and up to 300 troops. The ship is fitted with a helicopter landing deck and self-defense weapons. A force of three Iranian Gren-class LSTs could land a battalion of ground troops at a time, and in three crossings of the gulf could land an entire brigade—assuming the ship survive the voyage.

The Gren-class is meant to replace the aging, Soviet-era Alligator-class, which the Russian Navy still relies upon. Due to funding constraints, the first ship took nine years to complete. Six ships were originally ordered, but reports suggest the Russian Navy might be cutting the number of ships to concentrate on a replacement for the canceled Mistral-class ships.

An Iranian order for six ships (each was originally projected to cost $300 million each) could provide Iran with a powerful amphibious capability.

During the Iran-Iraq War both countries showered one another with Scud missiles. Iran has continued to develop ballistic missiles, but its designs are marred by technological shortcomings. Iranian missiles suffer from the use of liquid instead of solid fuel and poor accuracy.

Iran already has ballistic missiles that can be used as terror weapons, but a force of proven, accurate missiles, even with shorter range, could be very useful. In that respect, the 9K720 Iskander short-range ballistic missile might be ideal.

Iskander is a tactical missile designed to knock out enemy command and control centers, radars and surface-to-air missile sites, airfields and other critical military targets. Iskander can carry a munition payload of 1,000lbs to 1,500lbs, including a high explosive warhead, submunition dispensing warhead or fuel-air explosives. Iskander was originally designed to be used against heavily defended targets but advances in anti-missile technology could potentially make defense against the short-ranged ballistic missile viable.

The export version of Iskander is limited to a range of 186 miles under the Missile Technology Control Regime agreement. This is still adequate to still put many of economic, military and political targets in the Gulf States in the Iranian bullseye.