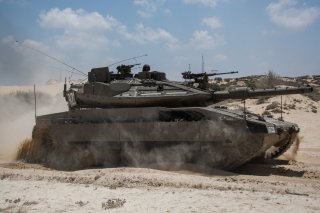 Today marks fifty-five years since the start of the 1967 Six-Day War. Few are familiar today with the strategic circumstances and dramatic crisis atmosphere that surrounded the war’s outbreak. Most probably recall, vaguely, that Israel won some big victory and associate it more with the contemporary West Bank and settlements issues. In fact, the war was a turning point in the entire history of the Arab-Israeli conflict.

The war changed the conflict’s primary focus, from Arab opposition to Israel’s very existence, to the attempt to regain the territories lost in 1967. During Israel’s War of Independence, from 1948-1949, no Arab state lost territory, just the putative Palestinian state that was to have been established under the 1947 UN Partition Plan, but which was rejected both by the Arab states and Palestinians. Egypt, Jordan, and Syria’s traumatic loss of territory in 1967—Sinai, the West Bank, and Golan Heights, respectively—began a long-term transformation of the conflict from an existential one, into an ultimately more resolvable dispute over territory.

Israel’s crushing victory forced the Arab world to begin to come to terms with the reality of its existence. The nascent process was not about recognition of Israel’s legitimacy, nor reconciliation, but acceptance of a bitter reality. Until 1967, much of the Arab world believed that Israel’s existence was an aberration of history, that it would soon put right with Israel’s destruction in the battlefield. Arab defeats, up to that time, were written off by various conspiratorial theories. The defeat in 1967 was so overwhelming, however, that it could no longer be explained away, and the recognition began to set in that Israel was here to stay. The process is still ongoing, but has taken hold, to varying extents, throughout the Arab world.

The war ended with Israel in control of strategically important territory and, for the first time, “defensible borders.” Sinai became a wide buffer with Egypt, the West Bank added over thirty miles to Israel’s 8.7 mile-wide “narrow waist,” and the Golan Heights placed much of Israel’s north out of Syrian range. The new borders enabled Israel to absorb the surprise attack in 1973 without preempting, but did not prevent it, nor repeated hostilities since then. Moreover, the loss of territory in 1967 strengthened Arab motivation to go to war, sowing the seeds for the 1973 war.

The Six-Day War transformed Israel’s sense of security and that of the entire Jewish people. The extermination of 6 million Jews, just two decades earlier, following two millennia of dispersal, persecution, pogroms, and vulnerability, was still very much a living memory, and fear of a second Holocaust was palpable. Israel, just nineteen years old at the time, still did not quite believe that it had survived the earlier wars and won its independence. Rabbis in Israel consecrated parks and other public spaces as cemeteries in preparation for mass casualties. Jews around the world prayed for Israel’s survival, in desperate need of proof that its existence was not merely a fleeting historical moment, that Jews were not just fodder for concentration camp ovens and that they could stand up for themselves. When the war ended with Israel’s victory, diaspora Jews took new pride in their Jewishness. The effect on many heretofore assimilated American Jews was dramatic. Identification with Israel, among Jews and non-Jews alike, became chic.

The war’s immediate aftermath dashed hopes that an exchange of “land for peace” would rapidly put an end to the conflict. The Arab League, at its annual summit held that year in Khartoum, just three months after the war, enunciated the infamous “three no’s of Khartoum”—no recognition of Israel, no negotiations, and no peace. Israel prepared for long-term occupation and positions on all sides hardened.

The above notwithstanding, the war was a critical stage on the road to peace. The nascent process of Israel’s acceptance engendered by the war was greatly reinforced by the 1973 war. If Israel could not be defeated even after being taken totally by surprise, the Arabs’ only realistic hope of regaining the 1967 territories was through diplomacy. It would take another decade and another war, but by sowing the seeds of Israel’s acceptance and focusing the conflict on lost territory, the Six-Day War laid the basis for future peace with Egypt in 1979. Peace with Egypt, the most powerful Arab state, transformed Israel’s strategic circumstances. Without Egypt, the Arabs no longer had a conventional military option against Israel. It is not by chance that there have been no major wars since Egypt made peace.

The “land for peace” formula ultimately proved successful only with Egypt. Syria was unwilling to sign a peace agreement despite Israel’s willingness to withdraw from the Golan Heights in 2000, and the Palestinians rejected three peace proposals that would have given them an independent state on essentially all of the West Bank and Gaza (two in 2001 and one in 2008). Questions thus arose whether the conflict had, indeed, become a territorial and resolvable one, or continued to be about Israel’s existence.

The war had a major impact on U.S.-Israeli relations, setting the stage for the later emergence of the “special relationship.” U.S.-Israeli relations were quite limited at the time. The United States had long viewed Israel as a weak state and feared that Israel might become a moral and strategic burden on it. Given the Arabs’ numerical superiority and oil wealth, this was a burden that the United States was loath to assume, especially at the height of the Cold War. Following 1967, the United States realized that Israel had become a militarily capable state and military ties began to expand. 1973 was the true turning point and today’s institutionalized and strategic relationship only began evolving in the 1980s and 1990s.

The 1967 war reinforced Israel’s fundamental belief in the principles of self-reliance and strategic autonomy. Russia severed relations; France, Israel’s strategic ally at the time, abandoned it shortly thereafter, and the United States declared neutrality. Indeed, the American failure to live up to a pre-existing commitment, to ensure Israel’s freedom of navigation in the Red Sea, was a critical factor in its decision to go to war.

The humiliating defeat weakened the Arab regimes, especially that of Egypt’s heretofore electrifying leader, Abdul Nasser, easing their grip over the Palestinian national movement. Yasser Arafat emerged as the head of the Palestinian Liberation Organization (PLO) in 1968 and in 1974 the Arab League, at its Rabat summit, recognized the PLO as the “sole legitimate representative of the Palestinian people,” ending Egypt’s and Jordan’s historic claim to represent them. Occupation of the West Bank brought the Palestinian problem into Israel itself. Until 1967, most Palestinians had lived either under Egyptian control, in Gaza, or Jordanian control, in the West Bank. Israel now assumed the burden both of their day-to-day affairs and national aspirations. The conflict became one of two opposing national movements.

Palestinian terrorism began long before the Six-Day War and subsequent occupation, indeed, long before Israel’s establishment. Israel had successfully kept terrorism to a level that its society could tolerate, but it became a factor of strategic importance, nevertheless. The massive wave of Palestinian terrorism during the second intifada (2000-2004), at the height of the peace process, together with the Palestinians’ repeated rejections of the dramatic peace proposals, decimated Israel’s peace camp, swayed a few elections in favor of the right-wing and led to its overall ascendancy in Israeli politics to this day.

The Six-Day War began the political divide and stalemate in Israel over the future of the West Bank, which has only deepened over the decades. Less than two weeks after the war, Israel offered to withdraw from Sinai and the Golan, in exchange for peace and security arrangements. The cabinet decision was silent, however, regarding the West Bank, a reflection of the political divisions that already existed at that early stage. For many Jews, control over the entire land of Israel, for the first time in 2,000 years, including Judea and Samaria, where the primary biblical story took place, and Jerusalem, the very heart of Judaism, was the realization of prophecy and the beginning of an almost messianic era. For others, it marked the emergence of religious and nationalist forces in Israeli society that have come to pose a threat to its national future.

The initial settlements, following the war, were designed primarily for defensive purposes, to ensure control over critical bits of territory just beyond the pre-existing border. With the “three no’s” in the background, and the religious fervor inspired by control of Judea and Samaria, the settlements took on a momentum of their own and, over the decades, spread throughout the area. The settler movement has become the most highly mobilized and single most powerful political force in Israel, able to impose its will on a general public that is less involved and, in any event, divided over the nature of a diplomatic solution.

By settling the West Bank, Israel is turning itself into a binational state. 40 percent of the combined populations of Israel and the West Bank is Muslim, hardly a Jewish state. Surprisingly, perhaps, polls demonstrate unequivocally that an overwhelming majority of Israelis, well over 90 percent, oppose a binational, one-state, outcome. There are many examples in democracies of people voting counter to their interests and beliefs. Few cases are quite so stark.