6 Challenges in the Middle East after ISIS 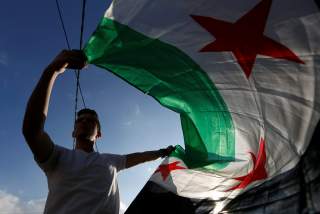 For the U.S.-led anti-ISIS coalition in Iraq and Syria, the key word in November has been “stabilization.” This term increasingly encompasses operations in Syria and Iraq after Raqqa was liberated from ISIS in October and the last urban area ISIS held in Iraq was liberated in mid-November. “We are progressing into a stabilization phase,” a November 24 statement by the White House said, detailing President Donald Trump’s discussions with Turkish president Recep Tayyip Erdogan.

What exactly stabilization means depends a lot on the interpretation of different policymakers at the Pentagon, State Department, the White House and among the leaders of Combined Joint Task Force–Operation Inherent Resolve. What is clear is that it means that after three years of war against ISIS alongside seventy partner nations, the United States is going through a transition in the Middle East. This will include continued training of the Iraqi Security Forces, of which 124,000 have already been trained by the coalition, according to spokesman Col. Ryan Dillon. It will also include some form of partnership with the Syrian Democratic Forces in Syria, which were an effective partner against Islamic State.

The lesson of the war on ISIS is that the region cannot be seen as a collection of independent states. A survey of the Middle East reveals the degree to which it is intermingled today. Turkey has forces in Syria and Qatar. Saudi Arabia and its Gulf allies are fighting a war in Yemen and have cut relations with Qatar. Iranian-backed proxy forces, including the Hashd al-Shaabi in Iraq, Hezbollah in Lebanon, and various militias in Syria, are playing a greater role than at any time in history. In Iraq they are part of the official security forces. ISIS is still active in Syria, Iraq, Egypt and beyond. Israel has carried out more than one hundred airstrikes in Syria, according to Israeli Air Force chief Maj. Gen Amir Eshel. Additionally, the United States, Russia and Jordan have signed a ceasefire agreement for southern Syria. Therefore, as ISIS fades a series of major challenges lay on the horizon.

Here is a review of the six major challenges that the United States faces:

On November 25, Israel’s Channel 2 reported that Prime Minister Benjamin Netanyahu conveyed a message to Syria’s Bashar al-Assad that Jerusalem would strike permanent Iranian bases in Lebanon. The warnings against Iranian bases have become an almost weekly occurrence in Jerusalem. In June, Netanyahu issued similar warnings after Iran fired a missile at ISIS near Deir ez-Zor. Israeli president Reuven Rivlin made similar warnings on a visit to Germany in September.

Iran has also warned Israel over any conflict with Hezbolah. Islamic Revolutionary Guard Corps commander Mohammed Ali Jafri said on November 24 that any war with Israel would lead to the Jewish state’s annihilation. In June, Hezbollah leader Hassan Nasrallah said that any future war with Israel would include Shiite fighters from Iraq and Iran.

Iran and Israel have had tensions before, particularly in the lead up to the Iran deal, the Joint Comprehensive Plan of Action signed in 2015. Netanyahu held up a cartoon of a bomb and a read line in 2012 at his UN General Assembly Speech. Things are different now because the war in Syria has brought Iran closer to Israel’s border. On November 10 the BBC reported that Iran was building a base at El-Kiswah south of Damascus, fifty kilometers from Israeli forces on the Golan. Hezbollah has been bled while fighting in Syria, but it is thought to have 150,000 rockets, according to Israeli estimates. Its threat to bring fighters from Iraq and Syria indicate it is thinking about a war in depth, not only tussling over south Lebanon where it and Israel were bloodied in thirty-three days of battle in 2006.

For Israel the prospect of Iran carving out a corridor to the sea via Iraq and Syria is largely coming true as Iraqi and Syrian regime forces meet at their shared border near Albu-Kamal. Both Baghdad and Damascus are close to Iran. Haider al-Abadi went to Iran on October 26 after meetings in Saudi Arabia that month.

Israel has sought to put red lines in Syria, warning that Iran must keep its bases away from the Golan. To accomplish its task in Syria, it has gone through Russian president Vladimir Putin who Netanyahu has cultivated a close relationship with over the last few years. However, when Russia, Jordan and the United States agreed on a ceasefire in southern Syria in July, Israel’s concerns were mostly shunted aside. Over the next year Israel’s warnings will need to be carefully weighed because eventually an Israeli airstrike in Syria could lead to a large conflict with Hezbollah and Iran.

Saudi Arabia versus Hezbollah and Iran

On November 4, Lebanese Prime Minister Saad Hariri appeared on TV in Saudi Arabia and resigned. The surprise announcement sent shockwaves through Lebanon because Hariri, whose father was likely assassinated by Hezbollah in 2005, said his country was being taken over by the “state within a state.” Within days Saudi Arabia was in a war of words with Hassan Nasrallah. The Kingdom intercepted a missile fired from Yemen that came close to the capital. Both Hezbollah and Riyadh accused one another of “declaring war.” Saudi Arabia’s minister for Gulf Affairs, Thamer Al-Sabhan, called Hezbollah the “party of Satan,” a riff on its actual name “party of God,” and spoke in particularly harsh terms.

Saudi Arabia has been increasingly critical of Iran over the past few years. Saudi foreign minister Adel al-Jubeir has accused Tehran of sending operatives to aid the Houthis in Yemen, which is where Saudi Arabia is fighting a war. The Kingdom complained often during the Obama era that it was being abandoned by U.S. policy and, consequently, embraced Trump with fanfare during the May summit in Riyadh. In October, Saudi Arabia supported Trump’s speech condemning Iran. Crown Prince Mohammad bin Salman appears to have greatly consolidated power since sweeping anti-corruption arrests in early November. Now, his team of Jubeir and Sabhan are in place to ramp up the confrontation.

Saudi Arabia has a problem though. Its army has been bogged down in Yemen since March of 2015. Nasrallah pointed out in his November 5 speech that Saudi Arabia cannot attack Hezbollah because it has no border with Lebanon, and he said Israel would not fight a war on behalf of the Kingdom. In addition, after two weeks in Riyadh, Hariri left for France, then Egypt and Cyprus, before returning to Beirut on November 21, where he put his resignation on hold.

Saudi Arabia has therefore failed to manifest its intention to confront Iran beyond rhetoric. It sent Sabhan to Syria in October to discuss rebuilding efforts in Raqqa, a potent symbol of tentative interests in eastern Syria. It has also worked to patch things up with Iraq by opening a border and operating its first flight in twenty-seven years to Baghdad in October. It is not clear what Riyadh’s strategy is in Iraq to try to encourage Baghdad to wean itself off of its reliance on Tehran.

Turkey, the United States and the SDF in Eastern Syria

After Trump spoke to Erdogan in late November reports circulated that the United States would end its supply of weapons to the Kurdish People’s Protection Units (YPG). The actual readout provided by the U.S. Embassy in Turkey doesn’t indicate that. It doesn’t mention the YPG. Instead, it says that there are “pending adjustments to the military support provided to our partners on the ground in Syria.” The United States asserts that it is entering a new “stabilization phase,” which indicates that it intends to stay in eastern Syria and continue working with the SDF of which the YPG is a component.

For Turkey this is unacceptable. Ankara views the YPG as the Syrian branch of the Kurdistan Workers Party and has continually expressed its outrage at any U.S. relations with the YPG. The U.S. coalition in turn has promised that “as we have done since offensive operations began in Raqqa, any divestiture of equipment to Kurdish elements of the SDF is shared with Turkey. We have been transparent on these divestitures with our NATO ally and fellow coalition partner.”

There is a coming clash between the United States and Turkey over eastern Syria. Turkey has been working more closely with Russia and Iran—especially since the Kurdistan independence referendum in northern Iraq. On November 22, Russia hosted Iranian president Hassan Rouhani and Erdogan in Turkey. Afterwards, the Turkish press was full of glowing reports of the new honeymoon. Hurriyet said that there would be “intense diplomatic traffic,” while Daily Sabah praised the “glimmer of hope for peace in Syria” and Erdogan was quoted by Anadolu News Agency as noting that Ankara and Moscow would talk “perhaps every 15 days or once a month” about Syria.