7 Myths about Trump's 'Doomed' Path to the White House 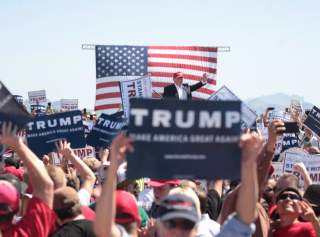 Donald Trump won the Republican presidential nomination in part because his primary campaign message was far more in tune with an angry electorate than that of his rivals. However, Trump’s winning campaign was also helped mightily by a “Fatal Eight” set of miscalculations made by the opposition.

These key mistakes included treating Trump as a mere celebrity rather than a serious candidate, failing to strategically attack the fledgling Trump candidacy in its crib, refusing to recognize that a candidate with a solid base can win in a crowded field even with negatives polling well above 50 percent, and assuming that evangelicals and self-identified conservatives would shun the thrice-married and socially moderate New Yorker.

Today, political elites on both sides of the aisle are once again weaving together a compelling set of “Never Trump” narratives that, taken together, predict a twenty-first-century Goldwater lamb being devoured by a Clinton lion. The question, of course, is whether these elites will finally get it right and turn Trump into an embarrassing historical footnote—or once again be spectacularly wrong. The answer will inevitably hinge on whether each of these “Seven Pillars of Beltway Wisdom” turn out to be on point—or wildly off the mark.

Democrat Hillary Clinton leads Republican Donald Trump in some of the most diverse battleground states - including by double digits in two of them - according to four brand-new NBC News/Wall Street Journal/Marist polls. — NBC News, August 12, 2016

The conventional wisdom says Trump faces a steep uphill battle in which he must hold on to every red state Mitt Romney won in 2012, and then run the Rust Belt table in Michigan, Ohio, Pennsylvania and Wisconsin. Obama handily won all four in 2012. If Trump can turn the Rust Belt states while keeping the states Romney won in 2012, that alone is enough to get to the winning magic number of 270 electoral votes. And that may well be doable, because Trump’s strength on the trade issue in the Rust Belt is mirrored by Clinton’s weakness. She was thumped by Bernie Sanders in Michigan and Wisconsin; Trump ran stronger than Clinton in Pennsylvania, and some early polls show a very close race in the perennial swing state of Ohio.

Even outside the Rust Belt, Trump’s independent-friendly and likely centrist campaign may have the power to significantly redraw the traditional blue, red, and swing state map. Trump could be the first Republican to take “Live Free or Die” New Hampshire since 2000—four Electoral College votes there. Nevada and its six votes last went Republican in 2004, but the Silver State may also have a real affinity for a casino/hotel mogul with major properties in the state.

Trump might even force Clinton to spend time and money defending her position in their mutual home state of New York, with its a whopping twenty-nine Electoral College votes. Bringing New York into contention would be a “yuge” game-changer, as the last Republican to win there was Reagan in 1984. Romney lost New York to Obama by nearly thirty percentage points in 2012.

Most important of all, Trump should run better than recent Republican presidential candidates in Florida, the mother of all swing states. This is Trump’s adopted second home, where he trounced “favorite son” Marco Rubio in the primary. With Trump at the top of the ticket, Republicans at least have a fighting chance to score Florida’s twenty-nine electoral votes, since Trump got almost exactly the same number of primary votes as Clinton.

The conventional wisdom that has Trump losing badly in Florida because of his tough stand on immigration might not be well-received by the state’s rapidly rising share of Hispanic voters. Which brings us to our next piece of conventional wisdom.

#2: Clinton Will Run Up The “Tear Down That Wall Mr. Trump” Hispanic Vote

According to the most recent Gallup poll . . . 77 percent of Hispanics view Mr. Trump unfavorably. . . . Despite calling for a “big, beautiful” wall at the Southern border (which Mexico will pay for), the deportation of all illegal immigrants, and labeling some Mexicans rapists and drug dealers, businessman Donald Trump won more than half of the GOP Hispanic vote in New York City. — Kelly Riddell, Washington Times, April 20, 2016

The inherent contradiction in Riddell’s reporting—bad Hispanic poll numbers for Trump, great election results—injects a much higher degree of uncertainty into Clinton’s actual level of Hispanic support than Trump’s rhetoric might suggest. What is certain, however, is that the Hispanic vote will be a major determiner of the general-election outcome.

Since passage of the landmark Immigration and Nationality Act of 1965, the nation’s foreign-born population has ballooned from ten million to an astonishing forty-five million immigrants. Today, as a result of this immigration tsunami, whites have fallen from 85 percent of the population to 62 percent, while the Hispanic share has risen from 4 percent to 18 percent.

Meanwhile, Latino support for Republican presidential candidates has been in free fall—from George W. Bush’s 44 percent in 2004 and John McCain’s 31 percent in 2008 to Romney’s 27 percent in 2012. That falling Republican share of a rising Hispanic voting bloc may indeed make it impossible for Trump to even compete in red-leaning Hispanic-rich states like Colorado, New Mexico and Nevada—or so the conventional wisdom goes.

This particular conventional wisdom is based, however, on the arguably flawed assumptions that Hispanics monolithically support an open border and view immigration as their top issue. Au contraire, says Brian Joondeph from American Thinker, citing these poll results:

“Immigration ranked fifth in importance to registered Latino voters, behind education, jobs, healthcare, and the deficit. These are core conservative issues and will attract more voters than running on amnesty and ignoring economic issues. In fact, more than half, ‘of Latino registered voters say they would vote for a candidate who disagrees with them on immigration policy if that candidate agrees with them on most other issues.’”

There may indeed be a wedge opening here for Trump—and one not without this irony: he will be the first nominee for president in history who, with his various casino and hotel properties, has actually employed tens of thousands of Hispanics.

Trump’s message will be simple: “I will not only create new jobs at decent wages for you with my economic and trade policies. I will prevent illegals from taking your job and driving down your wages with my immigration plan.” In fact, this is a message that may resonate across what many claim to be Trump’s yawning chasm of a racial divide. Enter our next pillar of conventional Beltway wisdom about the black vote.

#3: Clinton Will Command the Black Vote

Statistics scream the Democratic Party has a hammerlock on the black vote. Obama won it in 2008 with 99 percent and again in 2012 with 95 percent. And it hardly takes a black Democratic face to get over 90 percent—Kerry, Gore and Bill Clinton all did it, dating back to 1992.

That said, Obama will leave office with his daughter on the way to Harvard while much of the rest of America’s black youth are more worried about bail than Yale. As PJ Media’s Roger Simon warns:

“The African-American community is in a miserable condition that has been getting worse for decades and has reached its nadir under Obama -- two-parent families disappearing, unemployment rates skyrocketing, incarceration rates catastrophic, drug addiction epidemic. We all look on in despair as gang members shoot children in the streets of Chicago and murders -- almost all black-on-black -- proliferate in Baltimore after years of decline.”

Trump will bluntly ask black (and brown) Americans whether they are more interested in more welfare checks and food stamps, which Hillary Clinton will happily supply, or whether they want the kind of job opportunities and rising wages a Trump presidency will offer. This prospect alone scares black liberals like Tavis Smiley, who warns:

“If Donald Trump is indeed the Republican nominee, it might be a miscalculation for Democrats to take for granted that black voters are a lock for their nominee, even with the [so-called] first black president [Bill Clinton] and Barack Obama both campaigning for her.”

Trump might also tap at the resentment blacks have for the wave of illegal immigration that has pushed blacks out of lower end jobs and suppressed wages. As National Review’s A. J. Delgado notes:

“The black unemployment rate is almost 11 percent, far higher than that of any other group profiled by labor statistics. African Americans are disproportionately employed in lower-skilled jobs—the very same jobs immigrants take.”