8 Misguided Arguments on Refugees and Terrorism 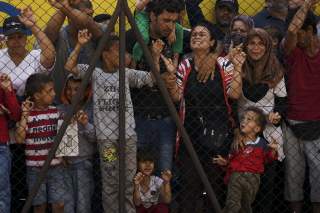 Refugee resettlement in the United States is as politicized as it has been in generations. That is a shame, because our current dumbed-down debate distracts us from reforms that could attract consensus support, decreasing security risks while ensuring the program’s viability.

To detractors, the current system endangers American lives and undermines democracy; the program’s architects are well-meaning, but naïve and dismissive of security concerns. For proponents, resettling refugees is a moral obligation and an unalloyed national good; critics are frightened, if not xenophobic and selfish.

Following the September 18 terrorist attacks in New York, New Jersey, and Minnesota—and news reports that perpetrators Ahmad Khan Rahami and Dahir Adan were immigrants—the internet seethed with both denunciations and formulaic defenses of refugee resettlement in the United States.

In response to the administration’s September 15 announcement that it plans to resettle 110,000 refugees in fiscal year 2017, including a “significantly higher number” of Syrian refugees (than the approximately 13,000 resettled in FY 2016), some members of Congress may again oppose full funding of resettlement-related Department of State and Department of Homeland Security operations.

At least thirty-one governors have now come out in opposition to resettlement of Syrian refugees, including Texas Governor Greg Abbott, who announced September 30 that Texas (which has the second largest program in the country) would end its cooperation with the federal program.

People on both sides are guilty of misstatements and exaggerations. Since we seem to be headed toward another round of rhetorical artillery from both sides, here are eight common positions taken by defenders or detractors of refugee resettlement, and why they are misguided:

1. “The United States Must Resettle (Its Fair Share of) Refugees.”

Given the scope of the current global refugee crisis, it is not surprising that refugee advocates are saying the United States has a duty to raise its resettlement quotas. But what is America’s “fair share?”

Resettlement of refugees is not obligatory under international or domestic law. While the obligation not to return people to persecution in their home countries (“non-refoulement”) is the most important provision of the 1951 Refugee Convention (and 1967 Protocol, which the United States has ratified), once a refugee reaches a first country of asylum, “third countries” do not have an obligation to provide onward immigration.

We can as a matter of policy slow or halt refugee admissions from certain countries or end the program entirely. Our humanitarian tradition is something Americans should be proud of, but it is not the only legitimate national interest.

The U.S. government also has responsibility for public safety, government budgets, diplomatic interests, economic prosperity, and promoting “general welfare” in the broadest sense. If resettlement of refugees, in whole or in part, was found inconsistent with those other equities, longstanding practice could be changed. Political debate tends to focus on two numerical decisions—the administration’s fiscal year refugee resettlement goal, including country-specific targets, and Congressional funding for associated State Department and Department of Homeland Security implementation. Thus, Congressional hearings that feature administration officials explaining the program and being asked tough questions (like the September 28 hearing chaired by Senator Sessions) are vital and appropriate, even when they are messy and disputatious.

Calls by foreign leaders, UN officials, or refugee advocates for the United States to take a “fair share” (variously defined) of the world’s refugees are requests, not directives, and some of those demands come from governments seeking to evade their own humanitarian responsibilities. One tendentious criticism sometimes lobbed at the United States is that we do not host refugees in the same proportion, when compared to our overall population, as other refugee host countries.

The reason we don’t have millions of refugees sitting in camps to be counted is that we ensure resettled refugees (more than 3 million through the formal resettlement pipeline since 1975) get legal status immediately and can apply for citizenship after five years in the country. And that 3 million does not include millions more who ultimately regularize their legal status after being granted “temporary protected status” in the United States in response to dire conditions in their home country; entering on tourist, work, or student visas and claiming asylum; or coming to America unlawfully and being granted permission to stay.

Countries that refuse to allow resident refugees to work, go to school, or obtain broader political rights may be able to claim generations of refugees, but their behavior does not qualify as humanitarian. The reason America does not host more “refugees” than some other countries is that we make so many of them citizens.

The choice whether to continue, change, or end the resettlement program is ours. If we are wise, however, we won’t make radical changes to the program without careful consideration of both risks and benefits, including a review of why resettlement of refugees has enjoyed strong bipartisan support historically, has been adequately funded by Congress, and has been actively solicited by officials from cities and regions around the country, particularly those with aging populations and slumping economies.

America has provided legal status and a path to citizenship for millions of the most vulnerable refugees since the end of the Second World War, rescuing them directly from their oppressive home countries or from countries to which they fled. It is not just altruism. Those new Americans made our country stronger and more successful, as is true of immigration generally.

With a declining birthrate (1.86 births per woman, according to the World Bank, well below the commonly cited 2.1 “population replacement rate”), the United States needs immigrants to avoid population decline and the associated economic and geopolitical harm. Immigrants, including resettled refugees, disproportionately take dangerous, unpleasant, poorly paid jobs (think livestock slaughter) that are necessary but less sought after by native-born Americans.

Immigrants are also well represented among the most successful Americans. For example, more than 40 percent of Fortune 500 companies were founded by immigrants or children of immigrants. And American business people with ties to other countries enhance the commercial market access of our exports.

Refugee resettlement is also a useful “soft power” foreign policy tool. America’s willingness to welcome refugees of many faiths and nationalities undercuts the propaganda of our enemies—whether states or non-state entities—alleging (mendaciously, but nevertheless loudly) that the United States is xenophobic, Islamophobic, racist, selfish, irresponsible, and hypocritical.

Our ongoing struggle with terrorist groups like al-Qaeda and ISIS looks likely to include a multi-generational ideological competition for the minds of those who could be, but might not be, radicalized to support terror attacks against us. Our reputation for humanity may be as important a determinative of success in that war as our military might.

3. “We Should Not Institute An Ideological/Religious Litmus Test for Immigrants”

Critics of calls from presidential candidate Donald Trump and his supporters to ban all Muslim immigration (or at least immigration from Muslim majority countries), have termed it, among other things, “The World’s Dumbest Idea.”

Their philosophical objections are often grounded upon a reverence for constitutional protections for religious liberty and appreciation of the history of immigrants coming to America in search of religious freedom. In his December 6 address following the terrorist attack in San Bernardino, California, President Obama said, “It is our responsibility to reject religious tests on who we admit into this country.” Congressman Don Beyer introduced a bill (HR5207) to try to preempt the Trump ban containing a “Prohibition on Denying Admission [to the United States] Because of Religion.”

It is not clear why Obama and Beyer think inquiries into religious or related ideological factors are inappropriate in the context of security reviews, however, or why they would reject the view that some beliefs are so extreme and dangerous that they would be sufficient themselves to constitute a justifiable bar to entry of refugees or other intending immigrants. From long, sad experience, we know how often the most pathological human hatreds have been exacerbated by perverted strains of religious fervor.

To say the obvious, such vetting should apply to people of all religious faiths, not just Islam (as well as people of no professed faith). Like most foreign policy professionals, I can easily call to mind extremists who claim to be adherents of Christianity, Buddhism, Hinduism, Judaism, and other religions whose beliefs are sufficiently violent and dangerous that I would not import them.

The idea of an ideological/religious test overseen by government officials may make Americans squirm uncomfortably about thought police, but we already have immigration-related ineligibilities concerning totalitarian party membership and incitement to terrorism (i.e., not just dangerous acts.)