9/11 Brought America to Afghanistan. The Fear of Another One Keeps It There. 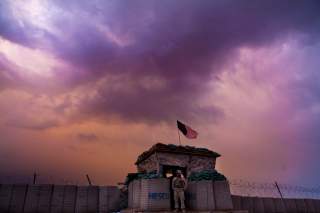 As the Trump administration was finalizing its Afghanistan strategy last week, the son of an Afghan governor-warlord was literally chewing on the ear of a provincial council member who threatened his father. Meanwhile, the country’s vice president is abroad, having fled charges that he had a political rival dragged from a buzkashi match and sodomized.

In his recent address, President Donald Trump rightly disavowed nation-building in Afghanistan. The goals he announced—preventing mass casualty attacks on America, eliminating Al Qaeda and ISIS, and preventing a Taliban takeover of Afghanistan—are essentially the same pursued by the Obama administration. But he failed to make any mention of the political reforms necessary for the current system in Afghanistan to survive.

Afghanistan's domestic politics have taken a turn toward barbarism. And the post-Bonn framework that has kept Afghanistan together since 2001 is unraveling. The country's warlords, who donned tailored suits in the years after 9/11, fashioning themselves as statesmen, are reverting to their natural dispositions, bringing their country closer toward civil war. And on preventing this, President Trump had nothing to say.

The Taliban insurgency, as any map depicting insurgent control demonstrates, touches all corners of the country. It is easy to regurgitate boilerplate statements about insurgent safe havens in Pakistan. While the Afghan Taliban leadership is ensconced in Pakistan, the insurgency itself is now largely Afghanistan-based and controls large swaths of the country that do not border Pakistan. In these areas, it is the brutality of U.S.-backed militias that drives young men into the insurgency and forces locals to accept the Taliban as the lesser of many evils.

Obama’s Afghanistan strategy involved a half-hearted surge whose enduring effect was the raising of the level of violence in Afghanistan, which continues unabated after the country was flooded with American weapons. Today, the Taliban are awash in American arms and vehicles, showing off their “Made in America” Humvees in their propaganda videos.

Last week, President Trump asserted: “We are not nation-building again. We are killing terrorists.” But in Afghanistan, killing is the easy part. It’s been going on for over three decades. It is attaining peace—a durable peace that includes power brokers currently invested in the Western-backed system and a critical mass of insurgents—that requires hard work.

Political indicators in Afghanistan are disconcerting. A peace deal secured last year between Kabul and insurgent leader Gulbuddin Hekmatyar was hailed as a potential model for peace with the Taliban. But his return to Kabul has reignited ethnic tensions between Pashtuns and non-Pashtuns that never went way and have been brewing since the contentious 2014 elections. Hekmatyar has busied himself by serving as President Ashraf Ghani’s pitbull, advocating a strong central government and excoriating non-Pashtun power brokers.

President Ghani has failed to meet his end of the power sharing deal with Chief Executive Abdullah brokered by then-U.S. Secretary of State John Kerry. Parliamentary elections are already two years late. Rescheduled for next year, they and the presidential polls slated for 2019 are likely to exacerbate, not heal Afghanistan’s ethnic wounds. Like previous elections, their validity will be questioned. And the underlying theme will be whether Afghanistan should have a strong, Pashtun-dominated central government, or a form of federalism that devolves power to the provinces—i.e. ethnic strongholds.

It is 9/11 that brought America to Afghanistan. And it is the fear of another 9/11 that forces America to stay. But the United States has the luxury of physical distance from the landlocked, chaotic country. It is a luxury that Afghanistan’s neighbors do not possess. What happens in Afghanistan does not stay in Afghanistan, as the millions of refugees who have lived in Pakistan and Iran for the past three decades attest.

Save for Pakistan, Trump made no mention of Afghanistan’s other neighbors, including China and Iran. China not only shares a physical border with Afghanistan, but it invested in the four-way dialogue process that was to pave the way for talks with the Taliban. It has hosted Afghan Taliban emissaries. And it could make substantial investments in Afghanistan as part of its Belt and Road Initiative.

Trump instead mentioned India as a partner for stabilizing Afghanistan. India has borne no share of the combat burden in Afghanistan. And as the Soviets carpet bombed Afghanistan in the 1980s, New Delhi backed Moscow and hosted few refugees. India is a free-rider that bears few of the direct risks from a renewed civil war in Afghanistan that neighboring states do. Hence, it has the luxury to be the lone regional state opposing a peace deal with the Taliban. The new Washington consensus is that India is a key partner in containing China in the region described as the Indo-Pacific. But, as a result of this emerging strategic orthodoxy, the Trump administration has forced an exaggerated Indian role in the pursuit of a stable, terror-free Afghanistan. The privileging of India is at the very least a slight to Afghanistan’s direct neighbors, which have much more to lose from the potential chaos may come from Trump’s kill first, seek negotiations later strategy.

Afghanistan’s neighbors—China, Iran, and Pakistan—as well as Russia, should have been publicly recognized as legitimate stakeholders in the country’s future. Instead, they not only have been ignored or treated as contractors, they have been also been told that the United States will remain in their backyard indefinitely with no clear plans for preventing another civil war or securing a negotiated settlement with the Taliban. As a result, Afghanistan’s neighbors will make strategies of their own.

Arif Rafiq (@arifcrafiq) is president of Vizier Consulting, LLC, a political risk advisory company. He is also a fellow at the Center for Global Policy and a nonresident fellow at the Middle East Institute.