Abadi Remakes Iraq as Washington Searches for a Policy 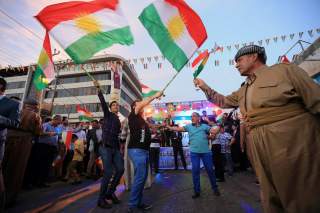 Several Humvees from Iraq’s 16th Infantry Division were disabled in battle with Kurdish Peshmerga near the town of Makhmur in northern Iraq on October 24. The Peshmerga, also driving U.S.-made Humvees, towed the Iraqi vehicle away. The outcome of the clash is symbolic of a policy in Iraq that is increasingly in tatters as the U.S.-trained Iraqi army clashes with U.S.-trained Peshmerga over areas that the American-backed 2005 constitution in Iraq defined as disputed between Baghdad’s central government and the autonomous Kurdistan Regional Government.

Iraqi prime minister Haider al-Abadi is trying to draw attention away from the clashes with the Kurds through an unprecedented whirlwind tour of neighboring countries. He has tried to be all things to all his neighbors. In Saudi Arabia he sought to illustrate his commitment to U.S. policy and give Secretary of State Rex Tillerson a win in the region. Brett McGurk, the special presidential envoy for Global Coalition to Defeat ISIS, praised the visit on October 22 as “breakthrough diplomacy over last 9 months by Secretary Tillerson, Iraqi, Saudi leaders. Vital to post-ISIS stabilization in region.” Then al-Abadi flew to Jordan for a meeting with King Abdullah. Muqtada al-Sadr, the influential Iraqi Shia cleric and politician, also visited Jordan the same day. Then al-Abadi flew back to Baghdad for a second meeting with the U.S. Secretary of State. Tillerson had said that Iranian-backed Shia militias, called Hashed al-Shaabi or Popular Mobilization Forces should “go home,” and al-Abadi wanted to press to him that the forces were part of the Iraqi governing institutions. They should “be encouraged because they will be the hope of the country and the region.”

The role of the Popular Mobilization Forces in Iraq is especially contentious because many of its leaders, such as Hadi al-Amiri and Abu Mahdi al-Muhandis, were trained in Iran. Al-Muhandis was listed by the U.S. Department of Treasury in 2009 as the head of Kataib Hezballah “for threatening the peace and stability of Iraq.” He and Kataib Hezballah “have committed, directed, supported or posed a significant risk of committing acts of violence against Coalition and Iraqi Security Forces,” according to a 2009 department statement. Eight years later the United States’ closest ally in Iraq praises the role of the militias al-Muhandis leads. On October 26, as al-Muhandis and al-Amiri led members of the Popular Mobilization Forces and Iraqi security forces on attacks on Kurds near the Syrian border, al-Abadi was in Iran meeting with Ayatollah Ali Khamenei. According to PressTV, which is linked to the Iranian regime, Khamenei told al-Abadi to be “cautious about the Americans’ deceptions and never put trust in them.” The Iranian leader also claimed that the United States had created ISIS “but now that the terrorists have been defeated by the Iraqi government and people, they [America] pretend to be supportive of this important development.”

Al-Abadi has cynically and marvelously balanced the United States and Iran. The United States is taking credit for a “diplomatic win,” as Foreign Policy described Tillerson’s work, while Al Jazeera has called al-Abadi’s trip a “victory lap.” Al-Abadi has scolded Tehran and Washington, saying he wants to work with both. “But please don’t bring your trouble inside Iraq, you can sort it anywhere else.” The current situation is often compared to a chess game, where the United States is losing.

The Iraqi leader wants to present his country as unified and on the road to stability, but the recent conflict with the Kurdistan region shows that this is largely an illusion. In order to take back Kirkuk, which the Kurdish Peshmerga had defended from ISIS for three years, Iran’s Quds Force commander Qasem Soleimani came to Iraq to seal a deal with politicians from the Patriotic Union of Kurdistan, one of the three major political parties in the Kurdish region. Then, while al-Abadi traveled abroad, the Popular Mobilization Forces’ Shia militias and elements of the Iraqi Army, including U.S.-trained units from the 16th Infantry Division, 9th armored, Federal Police and Emergency Response Division, launched attacks on Kurdish positions in Altun Kupri, Makhmur, Telskop and near Zummar.

The latter battle on October 26 is particularly important strategically because it is close to where the Syrian, Iraq and Turkish borders meet. The sole open border crossing between Syria and Iraq is at Faysh Khabur. This has also been a conduit for vehicles sent by the United States to assist the Syrian Democratic Forces fighting ISIS. It is near a pipeline that runs from Kirkuk to the Turkish port of Ceyhan. Capturing this would allow Baghdad to bypass the Kurdish region to export the more than three hundred thousand barrels of oil that could potentially be produced by the Kirkuk fields seized on October 16.

Al-Abadi’s visit to Turkey on October 25, which is when he met President Recep Tayyip Erdogan, was aimed at securing control over the border between the Kurdistan region and Turkey as well as discussing the oil pipeline. According to the Daily Sabah “Anakara is ready to provide support for efforts to operate the oil pipeline with Baghdad.” A day of battle on October 26 left dozens dead and wounded on both sides about ten kilometers from Faysh Khabur and the pipeline. A ceasefire followed the battle and provided a pause, but Iraq and its allies in Turkey and Iran remain resolved to get to—and secure—the border. Achieving this goal would weaken the Kurdistan Regional Government and erode the unique autonomy it has enjoyed since 2003. The KRG, which is suffering an internal political crises after losing Kirkuk, has devoted veteran Peshmerga officers to defend the area, but they have seen no indication that Washington will help mediate with Baghdad.

Perceptions of Iraq policy may be changing in Washington. House Speaker Paul Ryan called on Iraq to heed Tillerson’s concern about the role of Iranian-backed Shia militia. He used a tweet to highlight a section relating to support for the KRG. Senators John McCain, Chuck Schumer, Ted Cruz, Marco Rubio and U.S. Representative Trent Franks have all spoken out in support of the United States standing with the KRG. “These aggressive moves against Kurds in Iraq orchestrated by Iran makes them stronger at the expense of US,” Rubio said in an October 26 tweet.

The U.S.-led coalition, which is supporting Iraqi forces fighting in Anbar, has been noticeably silent on the Erbil-Baghdad clashes. It has put the coalition in an awkward position because until weeks ago they were advising and training some of the units now fighting Peshmerga, who the coalition was also training via the Kurdistan Training Coordination Center. “Coalition forces have not been involved in any of the recent events between the ISF and Peshmerga,” the Combined Joint Task Force Operation Inherent Resolve Public Affairs Office wrote in an October 26 email. “We are deeply concerned with the recent violence in northern Iraq and strongly urge all sides to avoid escalatory actions.” Dialogue remains the best way to defuse tensions, the coalition says, and the destabilizing clashes “distract from the fight against ISIS and further undermine Iraq’s stability.”

Jonathan Schanzer, senior vice president for research at the Foundation for Defense of Democracies, says the KRG’s decision to hold a referendum in September created a crisis that Washington warned Erbil would erupt. “Kurds failed to secure any guarantees from the U.S. in advance or guarantees from other nominal allies in the Middle East.” He argues that Baghdad sensed weakness on the part of the Kurds and was “looking to press their advantage. This is brutal politics right now and they [Baghdad] appear to be in a position to extract concessions . . . we see an Iraqi government armed and trained by the U.S. taking steps to strategically weaken another U.S. ally and it is cringeworthy and begs for a stronger U.S. response.” He says we are “drifting sideways in a truly lamentable chapter in the Middle East.”

With the Iranian foothold in Iraq achieved at the same time as the United States is determined to roll back Iranian influence in the region, a key part of Donald Trump’s foreign policy, the Kurds are victims of being at the intersection of a changing policy. “What happens to the Kurds is a signal to what happens to other allies,” Schanzer says. The problem for the United States is that the new policy on Iran rolled out by Trump on October 13 will take months to put in place. Soleimani’s involvement in Kirkuk points to the fact that he advised the Iraqi government to act quickly before U.S.-Iran policy ramped up.

This leaves the United States wondering how to fix what has happened. With a small military footprint in Iraq devoted solely to defeating ISIS, all that Washington has done is use diplomatic pressure. U.S. ambassador Douglas Silliman worked to end clashes on October 24 near the Christian village of Telskop. However, given the U.S. devotion to Iraqi unity, the conflict is seen as an internal one and deeper involvement would be portrayed as mission creep. The need to maintain supplies flowing to the Syrian Democratic Forces in Syria, which is still fighting ISIS, means Baghdad is key to the possibility of opening a new border crossing at Rabiah to reroute supplies if need be. Saudi Gulf affairs minister Thamer al-Sabhan visited Raqqa with McGurk on October 17, the day after Iraq took Kirkuk from the Kurds. For the United States, the Saudi-Abadi connection is a priority, and the chance that Saudi Arabia will invest in Raqqa post-liberation means aid could also flow via Baghdad to eastern Syria. Balancing this interest along with the U.S. historic relationship with Erbil and Kurdistan autonomy leaves Washington without a clear policy to confront Baghdad if it continues to weaken the Kurdistan Regional Government.